Who Killed All Those Honeybees? We Did

The great bee die-off is not such a mystery after all: Industrial agriculture has stressed our pollinators to the breaking point. 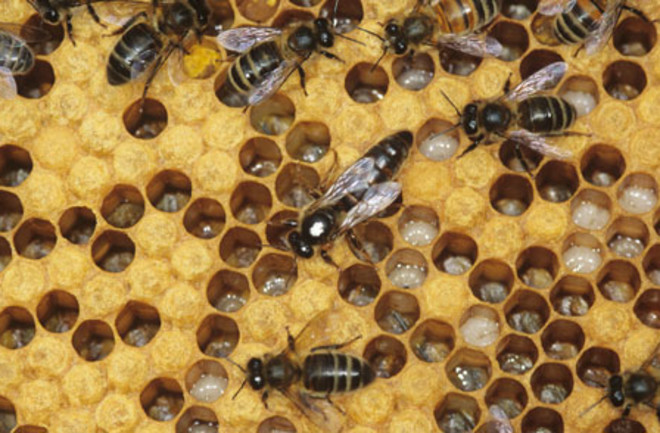 It was mid-July, and Sam Comfort was teetering at the top of a 20-foot ladder, desperately trying to extract a cluster of furious honeybees from a squirrel house in rural Dutchess County, New York. Four stingers had already landed on his face, leaving welts along the fringe of his thick brown beard. That morning, the owner of the squirrel house had read an article in the local paper about Comfort’s interest in collecting feral honey­bees, so he called and invited him over. Commercial bee colonies, faced with massive mortality rates, are not faring so well these days, and unmanaged hives like this one could be their salvation. Comfort hurried over, eager to capture the hive’s queen and bring her home for monitoring and, if she fares well, breeding.

The nation’s great bee die-off has provoked a furious debate: What has caused a third of all commercial honeybee colonies to perish each year since 2006? Although widespread bee deaths have occurred before, the current sharp decline is different. This time some bees have simply vanished, abandoning their hives. The phenomenon, known as colony collapse disorder (CCD), has been attributed in part to the same viral and bacterial infections, pesticide poisonings, and mite infestations that devastated bees in the past.

Whatever the proximate cause, it increasingly appears that the bees are succumbing to a long-ignored underlying condition—inbreeding. Decades of agricultural and breeding practices meant to maximize pollinating efficiency have limited honeybees’ genetic diversity at a time when they need it the most. Addressing CCD may therefore require more than a simple fix. “We need to have a diverse set of genetic raw material so we can find bees resistant to disease,” says Steve Sheppard, an entomologist at Washington State University. “Genetic diversity is an important part of the solution.”

The problem is hardly trivial. A third of the total human diet depends on plants pollinated by insects, predominantly honeybees. In North America honeybees pollinate more than 90 crops with an annual value totaling almost $15 billion. Indeed, that importance lies at the root of what went wrong. In trying to make bees more productive, apiarists have torn the insects from their natural habitats and the routines they mastered over millions of years. As a result, today’s honeybees are sickly, enslaved, and mechanized. “We’ve looked at bees as robots that would keep on trucking no matter what,” says Heather Mattila of Wellesley College, who studies honeybee behavior and genetics. “They can’t be pushed and pushed.”

In the beginning, honeybees and their partners, the flowers, drove an explosion of natural diversity. While most bees preferred a specific type of plant, honeybees were equal-opportunity pollinators—“pollen pigs,” beekeepers called them. The most socially complex of the bees, they thrived in colonies led by the egg-laying queen, who ensured the genetic fitness of her progeny by breeding with multiple male drones from other colonies.

All that began to change in the early 20th century, when farms and orchards started enlisting honeybees to pollinate their crops. Bees that were adapted to harvesting pollen from a variety of plants suddenly spent a month or more at a time surrounded by nothing but almond or apple trees. Farmers eager to increase their crop yields turned to commercial beekeepers, who offered up massive wooden hives stocked with queen bees genetically selected to produce colonies of good pollinators. These breeding practices slashed the genetic variety that helps any species survive infections, chemicals, and other unforeseen threats.

And lately those threats have been profound. During the 1980s, tracheal mites and then varroa mites arrived in North America, decimating honeybee populations. One entomologist studying the mite invasion was Michael Burgett of Oregon State University, who spent much of his career searching for pesticides that would kill the mites but not the bees. In 1995 he published the results of a 10-year bee survey. The average annual honeybee loss, attributed to both mites and chemicals, was about 23 percent.

The stresses endured by honeybees became clear to Sam Comfort earlier in this decade when he was working for a Montana pollination outfit called Arlee Apiaries. Every February at the start of pollinating season, Comfort and fellow contract workers used fork­lifts to move 12-foot-tall towers of wooden hives onto flatbed trucks. “Five hundred hives to a truck, all of them covered by a giant net,” he says. With the loads jammed in tight, drivers set out for the almond groves of California, where the bees’ whirlwind pollination tour began. Every month brought a new destination: apple orchards in Washington, cherry groves in Montana. During each assignment, the bees fed on row after row of the same crop. After pollinating throughout the spring and producing honey in the summer, Arlee Apiary bees were sent to a sandy lot near San Francisco, where they spent the winter living on corn syrup—a scene that Comfort describes as “fear and loathing in a city of 5,000 hives.” One worker would pop off the hive lids and set them aside, a second would use a gasoline nozzle to pump corn syrup from a 300-gallon tank into the hives, and a third followed to put the lids back on. When warm weather arrived in Montana, the drivers would truck their worn-out bees home, only to begin the whole process again.

One of the most devastating pressures on the bees, according to Mattila’s research, is the limit on what they can eat. “Vitamins, minerals, fats, proteins—all the same things we need to survive come from pollen,” she explains. In the wild, honeybees get different nutrients from different types of plants, but industrial agriculture limits bees to monoculture crops. “Once nutritionally stressed, honey­bees burn through their body’s reserves; then they shut down brood rearing,” Mattila adds. “It’s all tied together.”

The bees not only receive an insufficient diet but must compete strenuously for it. “Hundreds of colonies go into an almond orchard at a time,” Mattila says, “so food can get spread pretty thin.” With so many bees around, some will also get lost and go home to the wrong hive. After all, she notes, “bees are used to nesting in trees, not in one of a thousand boxes that all look the same.” The upshot is that a malnourished, disoriented bee carrying mites could end up infecting a whole new colony. “It’s like having the flu and going on a crowded subway. Bees spread disease the same way.”

Jammed in tight, The bees set out for the almond groves of california to begin their whirlwind pollination tour.

Inbreeding then provides the devastating final insult to the bee colonies. The looming genetic crisis made its first blip on the entomological radar more than a decade ago, after Sheppard began comparing the mitochondrial DNA of commercial and feral queens. The differences were stunning. About 30 percent of bees in the 700 feral colonies he studied showed traces of genetic code from northern European ancestors, compared with just 2 percent in commercial stock. “It was a genetic bottleneck,” he says. And the problem persists. A study published by Sheppard in July revealed that breeders use only 500 select mothers annually to produce almost a million queen bees, which then get shipped out to lead commercial hives. Making matters worse, the severe loss of wild honeybees due to mite infestation virtually eliminates any chance that feral drones will mate with commercial queens and liven up the gene pool.

Mattila explores the grim effects of loss of genetic variety in the glass-walled bee colonies she keeps in her lab, where video cameras capture it all—bees building honeycombs, producing honey, rearing offspring, doing waggle dances. One of her studies compared colonies having 15 different drone fathers (similar to the natural state) with those having only one. The more diverse colonies stored more honey, spent more time foraging, and experienced faster growth; the single-father colonies could not even amass enough supplies to survive a winter. “They’re not aggressive. They don’t communicate, their approach to food is lackluster, and they don’t put on weight,” Mattila says.

In response to the sharp decline in commercial bee populations, scientists and beekeepers like Comfort are working to wind back the clock. “It’s all about diversity,” he says. After years in industrial beekeeping, he had an epiphany in 2007 while sitting on an elk path in Montana thinking about the situation: dead bees, missing bees, mites thriving on chemical strips meant to kill them. He decided to pack it in and head back East. He drove to Dutchess County in the truck he now lives in, with an empty honey­comb dangling from the mirror and a Montana license plate that read BEESWAX.

Today Comfort shuttles around in his truck, fetching hives out of local squirrel houses, conducting a one-man breeding project. His goal is not to furnish the large-scale migratory beekeepers with more robust stock but rather to create an infrastructure of small-scale beekeepers. After he collects a new colony, he monitors it for a while, watching to see if it survives the winter, resists pathogens, and produces a good amount of honey. The ones faring well are the keepers. He uses the progeny from those hives to establish new queens, then sells those queens to local beekeepers, mostly hobbyists who “just want to let the bees do their thing.”

Fortunately, Comfort is not alone. Michael Burgett is doing similar work in his lab space at Oregon State. Firemen and other locals call him up when they come across feral hives, and Burgett snaps them up. He hangs on to queens from hives that survive the stress of winter and mates them with bees from other healthy colonies. At North Carolina State University, entomologist Debbie Delaney is lending a hand as well, seeking out feral colonies that have survived the spread of the varroa mite in the hope that she will find genes that confer resistance.

Slowly, beekeepers like Comfort and Burgett are trying to ease bees away from their troubled state, allowing them to drift back toward a healthier, more natural way of life. “Bees have been doing this for 80 million years,” Comfort says. “All we have to do is get out of their way.”