"That is Shadowfax. He is chief of the Maeras, lords of all horses, and not even Theoden, King of Rohan, has ever looked on a better. Does he not shine like silver, and run as smoothly as a swift stream?" - Gandalf 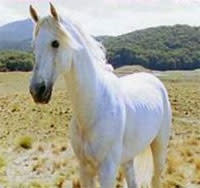 In the Lord of the Rings, Gandalf rides upon a magnificent white stallion called Shadowfax. White horses have been greatly prized in human societies as a sign of wealth and dignity, largely because their bright coats are both pretty and rare. There are reasons for that. In the wild, the same conspicuousness that inspires legendary tales also makes white horses vulnerable to predators and sensitive to skin cancer. But they have an unexpected benefit - they make horses less attractive to horseflies.

Anyone who has been bitten by a horsefly (formally, a tabanid) knows that they're much more irritating than your average midge or mosquito. Rather than puncturing skin, their mandibles are designed to rip and shear. As a result, their bites hurt and they can drive grazing animals to distraction. They can also transfer serious diseases, including Equine Infectious Anaemia, parasitic worms, and even anthrax.

Now, Gabor Horvath from Eotvos University, Hungary, has found that white coats are more horsefly-proof than darker ones. They reflect very little polarised light - light vibrating on a single plane - and it's this light that horseflies use to track down their next blood meal.

On a sunny June day, Horvath watched two horses - one brown and one white - as they grazed in a local field. Both were almost continuously attacked by horseflies and had to defend themselves by tail-swishing, kicking, shuddering, head-swinging, biting, licking and even rolling on the group. But the white horse had the better time of it - photographs revealed that, on average, the brown horse had 3.7 times more horseflies on or near it. Eventually, the attacks were so irritating that the horses were driven into a nearby shady forest, where they gained a temporary respite. Again, the brown horse was always the first to cave and spent longer in the shade. 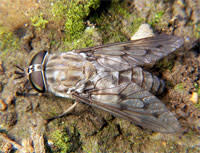 Why did the flies prefer the brown horse and shun the white one? It wasn't to do with colour or brightness. When Horvath put up two pieces of matte cloth, one brown and one white, he found that both were unappealing to horseflies. It was only when he half-covered the brown cloth with a shiny, transparent plastic sheet did the flies start flocking.

Horvath says previous studies have shown that horseflies are attracted to polarised light. In his experiment, the shiny, brown surface reflects plenty of polarised light, vibrating in the horizontal place, regardless of the angle it's viewed from. Neither of the matte surfaces do this.

To demonstrate this even more clearly, Horvath built three life-size horse models, one brown, one black and one white, and all covered in a sticky coating. Using a polarimeter, he measured the polarised light bouncing off these models and showed that the stronger those reflections, the more flies became stuck to them. Even the parts of the models that reflected the most polarised light - the rump and hindquarters - attracted the most flies.

Horvath says that the horsefly's proclivity for horizontally polarised light probably has several functions. It could lead them to water sources where they can lay their eggs. And horseflies are usually dark and drab in colour, so landing on a white body could make them more conspicuous to hungry birds.

Regardless of the fly-proofing provided by white coats, it's clear that for wild horses, this benefit doesn't outweigh the many drawbacks. Otherwise, white horses would be far more naturally common. However, some grazing animals like the zebra and okapi are striped, and all individuals carry some degree of white banding. That hasn't escaped Horvath's attention and his paper ends on a tantalising note:

"We would like to mention that we are preparing a separate paper on the effect of stripes on host animals like zebra, okapi, etc. to the attraction of tabanid flies. We show that such stripes make the host quite tabanid-repellent."