Which Came First, the Snake or the Venom? 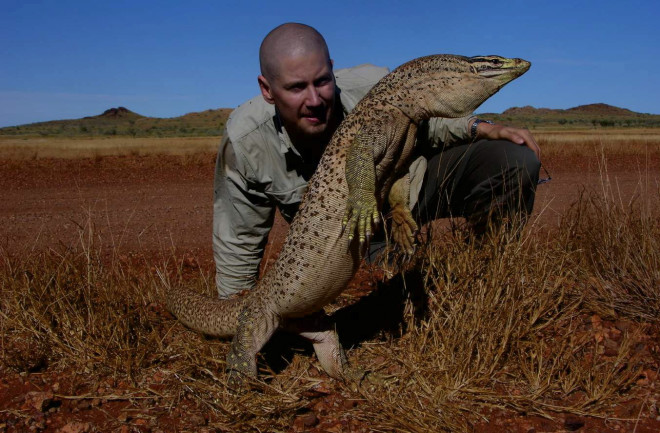 Back in February I discovered the remarkable work of Australian biologist Bryan Grieg Fry, who has been tracing the evolution of venom. As I wrote in the New York Times, he searched the genomes of snakes for venom genes. He discovered that even non-venomous snakes produce venom. By drawing an evolutionary tree of the venom genes, Fry showed that the common ancestor of living snakes had several kinds of venom, which had evolved through accidental "borrowing" of proteins produced in other parts of the body. Later, these genes duplicated to create a sophisticated cocktail of venoms--a cocktail that varied from one lineage of snakes to another. As I report tomorrow in the Times, Fry has taken this research the next logical step. He set out to find out when that ancestral venom evolve. In his search, Fry made an astonishing discovery: snakes are 100 million years old, but snake venom is 200 million years old. This conclusion arose from the fact that some lizards produce the same sorts of venom as snakes--including this desert spotted monitor that Fry is posing next to on one of his venom expeditions in the Outback. I find that these stories make the most sense if I can map them onto an evolutionary tree. Fortunately this study (published online at Nature) comes with a particularly nice one, which I've reprinted here. It shows how snakes are related to lizards, based on a new large-scale study of DNA. Snakes descend from a close common ancestor with monitor lizards, gila monsters, iguanas, and other related species. They're more distantly related to skinks, gekkos, tuataras, and other less well known lizards.

The venomous species did not turn up on random branches of the tree. Instead, they all belong to the same branch, marked on the tree with the name "venom clade." (Clade just means a group of species sharing a common ancestor.) The venoms shared by all of them are marked in red and brown. Red-marked venoms are produced in glands on the top and bottom of the mouth, and brown in the top. Snakes then added on 17 other kinds of venoms. Other lizard clades have venoms of their own, in other marked in yellow. The tree also shows how mouth glands evolved at the same time, beginning as a way to make prey slimey enough to go down the throat to a way to pour venom into a wound. The story revealed in this tree reveals how a 200-million year old lizard species evolved venom that helped it disable prey long enough to kill them. Over time, new kinds of venom emerged before the common ancestor of living snakes and their close relatives. Snakes later became venom specialists, in some cases evolving a bite that was even fatal to humans and other big animals. At the same time, though, other lizards were acquiring some new venoms of their own, probably as an adaptation to new kinds of prey. It's a process that's going on today, as reflected in different cocktails of venom found in different populations of the same species of lizard. It will be interesting to see what happens as Fry and others add more branches to this tree. For example, pythons are not known to be venomous. Did they lose venom as they became adept at constrictors? And how did the function of the venoms change with time? A Komodo dragon and a coral snake occupy very different ecological niches, so they need to manipulate their prey in different ways. Incidentally, I would stress that this discovery does not mean that your pet iguana is going to strike you down tomorrow morning. Lizard venoms are sophisticated, but they typically come in such small doses that they won't cause you any significant harm. And if you do happen to get bit by a Komodo dragon, you'll be able to be distracted from the effects of its venom by the fact that your arm is missing.