Wherever They Go, These Spiders Always Evolve the Same Way 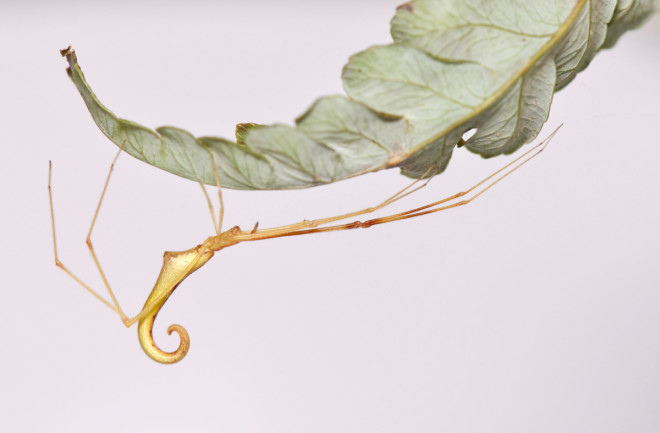 A gold-colored stick spider. (Credit: George Roderick) We often assume that evolution is entirely unpredictable. But, that's not always the case. Some evolutionary changes seem to be at least partly hardwired into a species' DNA. For an example, we can look to ecomorphs, species that occupy the same habitat and look generally alike, despite not being very closely related to each other. In some cases, species will repeatedly evolve the same characteristics as they move from one location to another, as if it were predestined.

Those Are the Options

Lizards of the genus Anolis, for example, found in the Caribbean, evolve into the same set of different forms every time they moved to a new island, dependent on which part of the rainforest canopy they chose to inhabit. A closely related sister species not found in the Caribbean doesn't evolve these forms, however. It's an example of convergent evolution taken to the extreme, and it hints to researchers that genetics and the environment might be interacting in a way they don't quite yet understand.

A dark-colored stick spider. (Credit: George Roderick) Scientists from the University of California, Berkeley found the same ecomorph behavior in a type of spider in Hawaii called stick spiders. They're characterized by long, spindly legs, and they come in three body patterns: dark, gold and white. The spiders jumped from island to island in the Hawaiian archipelago beginning about 1.7 million years ago, moving from west to east as new landmasses emerged from the sea. And each time a settler landed and began a new population, the same three colorations emerged. No matter if the the founder was dark, gold or white, all three patterns would appear shortly thereafter — but none others.

Each of the three colorations grants the spiders camouflage in a different environment. Dark spiders can hide on rocks or bark, gold spiders hide out under leaves and white spiders blend in to lichens. This is important for them, because they are a favorite target of insect-eating birds on the island. Staying hidden is a must for survival. Stick spiders are also mobile hunters — they don't spin webs, so their camouflage could also help conceal them from their prey.

A white-colored stick spider. (Credit: George Roderick) The researchers think the three patterns' staying power could come down to a kind of genetic switch that allows for rapid diversification into a few different forms. But they haven't found one yet. The spiders also share a few characteristics with other ecomorph species — they live in isolated habitat and jump from island to island frequently (at least in evolutionary terms). Stick spiders also have few predators and rely on a very specific kind of camouflage — factors that may also help to explain the mystery. Their research could help explain why some features of evolution are more predictable than others, and how to tell the difference. It's also a reminder that Hawaii, which has been combed over by researchers for decades, still has a few surprises for us. "There are all these unknown radiations that are just sitting there, all these weird and wonderful organisms," says Rosemary Gillespie, an evolutionary biologist at the University of California, Berkeley and study co-author in a statement. "We need everyone to understand what's there and how extraordinary it is. And then we need to see what we can do to protect and conserve what still waits to be described."