Where Have All The Turtles Gone? 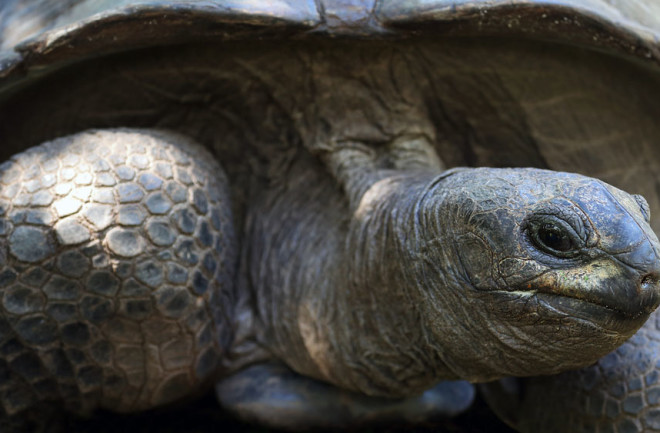 Turtles survived the massive extinction event that took out the dinosaurs more than 60 million years ago. But climate change, habitat loss and exploitation from the commercial pet industry have now decimated global turtle populations.

Of the 356 turtle species scientists know about today, more than half are endangered or have already gone extinct. As their numbers continue to decline, scientists say their loss will alter ecosystems around the world.

Turtles were once abundant reptiles. For example, researchers estimate tens of millions of sea turtles inhabited the Caribbean Sea a couple hundred years ago, but now their numbers are 1,000 times fewer. And the Aldabra giant tortoises that live on the islands of the Aldabra Atolls in the Seychelles, an island group off East Africa, were once thought to contribute more biomass to their habitat than herds of grazing herbivores do on Africa’s Serengeti.

Jeff Lovich is a research ecologist at the United States Geological Survey’s Southwest Biological Science Center in Flagstaff, Arizona. And he’s had a self proclaimed “love affair” with turtles since he was a kid.

Lovich wanted to know what will be lost and how ecosystems will change as turtles disappear.

So he and a team of researchers combed through the scientific literature and drew on Lovich’s more than 35 years of studying the animals to find out. Their analysis revealed many examples, detailed below, of how much ecosystems depend on the reptiles as keystone species, ecosystem engineers and valuable scavengers.

A World Without Turtles?

The vulnerable Aldabra tortoises are keystone foragers, meaning they have an outsized effect on their environments for how many there are. The giants can eat as much as 174 pounds of vegetation each year. Massive appetites like these help keep ecosystems in balance, Lovich and team noted in the work. And in coastal tide marshes in the eastern and southern U.S., diminutive turtles called diamond-backed terrapins prey on salt marsh periwinkle snails. These snails have been shown to transform salt marsh grasslands to mudflats in as little as eight months.

Other turtles are habitat architects. Weighing in around 12 pounds, the sizable gopher tortoise of the Southeastern U.S. builds burrows some 33 feet long. The burrows increase plant biodiversity and also provide a home for more than 360 other species, many of which can’t dig for themselves and some, like the indigo snake and gopher frog, are also endangered.

“If you take the tortoise out of those ecosystems, where are those 360 species going to find shelter?” asked Lovich.

“I hope [this work] will bring attention to the plight of turtles because they tend to be under appreciated compared to more charismatic species,” he said.

Lovich and team outlined their findings Wednesday in the journal BioScience.