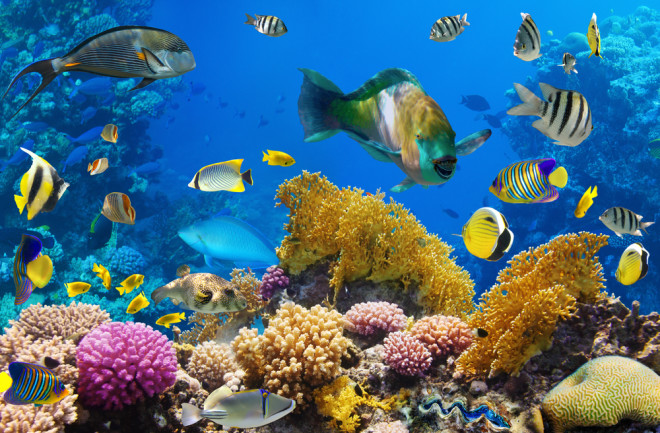 You can't see it, but these fish are spreading nutrients all over. (Credit: Tischenko Irena/Shutterstock) There's something in the water around coral reefs. And that something is fish pee. Although you may cringe at the thought of swimming through clouds of urine, coral reefs wouldn't be the same without fishes' urinary benevolence. Fish excretion may be the furthest thing from your mind as you swim through a vibrant coral reef, but it a plays a vital, though underappreciated, role in supporting the diversity of life under the sea. That’s because it contains two important elements: nitrogen and phosphorous. Fish spread them around by ingesting plants and other fish, extracting the nutrients through the digestive process and then excreting them as they swim. From there, the nitrogen and phosphorus go on to feed the algae that sustain corals.

University of Washington ecologist Jacob Allgeier has been studying the importance of fish pee in the Bahamas for several years now and has published papers showing that coral reefs, which get little outside nutrient input, thrive only when these nutrient levels remain within a fairly narrow band. He focuses on the role fish play in this process — specifically how overfishing and changes to fish populations negatively impacts reefs by upsetting the delicate chemical equilibrium that the critters help maintain. In his latest study, published Tuesday in Nature Communications, Allgeier narrowed his focus to figure out which kinds of fish were important to reefs. So he captured hundreds of fish and temporarily held them in his version of make-shift test tubes — water-filled plastic bags. His goal was to find out how many nutrients different kinds of fish put into the water. He looked for concentrations of both nitrogen and phosphorus, testing the water before and after a fish had been held in the bag for half an hour. In total, Allgeier gathered data from 143 species across 43 Caribbean reefs.

Top of the Food Chain

He concluded that when it comes to reefs, it's the big fish that matter most — the predators on the top of the fish food chain. These scaly sea fauna, including groupers, snappers and barracuda, tend to produce more phosphorus than small fish, meaning that removing them from the reef can cause a harmful shift in the ratio of nutrients in the water. Unfortunately, they also happen to be the most desirable to fishermen in the region. In the same study, Allgeier compared heavily fished reefs to those protected by marine reserves and found that overfished reefs had half as many essential nutrients as those that were protected. The reefs' distance from populated areas was another important factor in determining whether nutrient levels were affected. In oceans where reefs are already under threat from warming waters, rising acidification and even viruses, further altering their intricately composed environment comes as just another straw on their backs. We might not ever really think of, or see, fish pee, but take it away, and a stage in the cycle of reef life goes with it.