Where Do New Languages Come From? 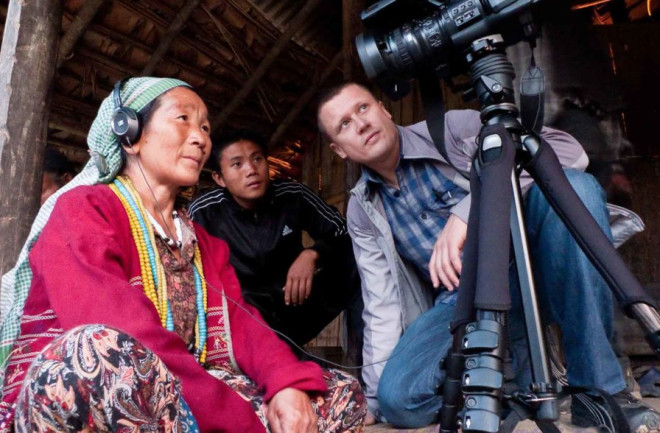 In the desert town of Lajamanu, Australia, at the bend of a narrow dirt road, Carmel O’Shannessy worked at a school as a teacher-linguist in the early 2000s. Lajamanu’s Indigenous Warlpiri people, who live in the country’s Northern Territory, were skilled at drawing sustenance from the landscape’s parched red soil, and O’Shannessy soon discovered hidden cultural riches the Warlpiri had stored up.

As she got to know the children in the community, O’Shannessy noticed they had a different way of expressing themselves than their elders. People in Lajamanu generally spoke English, Warlpiri (an established local Aboriginal tongue), and some Kriol (a blend of English and Aboriginal languages). But O’Shannessy, who speaks both English and Warlpiri, grew convinced that the kids joking in the schoolyard were communicating in an unusual way. “When I listened more closely to how the children were speaking, they seemed to be using two languages in every sentence,” remembers O’Shannessy, now a lecturer at the Australian National University in Canberra. “I thought, This is really interesting. This is something worth investigating.”

As O’Shannessy recorded conversations and took notes, she realized that the children’s speech was distinct from anything she’d heard before. She created a storybook in pictures about a dog that escapes from a monster, then asked the kids to describe what was happening in the story. That exercise helped her confirm a few key features of their language. The children were using sentence structures from Warlpiri, but the verbs came from Kriol. The nouns, meanwhile, came from English, Warlpiri, and Kriol.

Speakers mixed in some completely new rules as well, like using the suffix “-m” to refer to past and present events but not future ones. That custom was not present in any earlier languages, O’Shannessy says. “That really consolidated that this is a new [language] system all by itself.”

The media hailed O’Shannessy for highlighting a newly discovered language, called Light Warlpiri. And that discovery is not an isolated incident. Within the past decade or so, linguists and anthropologists around the world have described a handful of recently recognized tongues for the first time, including Jedek in Malaysia, Koro Aka in northern India, and Zialo in Guinea.

Understanding how languages emerge and survive holds great interest for researchers, since many languages are slipping away in increasing numbers around the world. The United Nations Educational, Scientific, and Cultural Organization (UNESCO) states that more than 40 percent of the world’s estimated 6,000 languages are endangered. But each new language debut or discovery represents a bright spot against the global backdrop of widespread language die-offs. Tongues like Light Warlpiri, Jedek, and Koro Aka fill gaps in our knowledge of how languages arise and endure, revealing some of the factors that can help keep rare languages alive.

Uncommon languages are better equipped to survive, researchers are learning, when young people are actively speaking them, whether in a family setting, in a school system, or in immersion programs. Elders who transmit cultural traditions to young people through a language can help it to thrive as well. But when the number of speakers drops from year to year — sometimes due to outside forces such as globalization that are difficult to control — rare languages may vanish, whether they’ve lingered for centuries or popped up seemingly overnight.

In some ways, the origin story of any language mirrors the broader story of how language evolved in the first place. Within close-knit groups of humans, whether on the savanna or in bustling towns, two factors have been present since ancient times: the need to communicate clearly and specifically, and the cognitive capacity to develop language systems that satisfy that need.

Relatively young languages, however, such as Light Warlpiri, are distinct in that they typically emerge out of the swirl of other, older languages that surround them. These new languages often arise in settings where there is some degree of cultural blending or displacement — and Light Warlpiri certainly fits that description. After British settlers arrived in northern Australia in the 1800s, Indigenous Australians began to speak English and Kriol.

In this fluid setting, Indigenous people became very comfortable switching between languages, a practice that helped drive Light Warlpiri’s emergence in the 1970s and ’80s. When adults spoke to children, O’Shannessy says, “they would speak in Warlpiri, but insert verbs and pronouns from English and Kriol. So the children internalized that system as if it was a single system.”

A similar melding prompted the rise of a language known as Jedek on the Malaysian peninsula, where many languages are spoken in a limited geographic area. Linguists from Sweden’s Lund University first stumbled across Jedek in the early 2000s while studying a variety of other languages spoken on the peninsula. Jedek bears some resemblance to Jahai, a language commonly spoken nearby, and is akin to other Malaysian languages heard somewhat farther away. But it is also its own separate entity, with distinct grammatical structures and “r” sounds that Jahai does not possess. In late 2017, the Swedish researchers published their first paper confirming that Jedek is a totally distinct language.

The village where Jedek is spoken places a high value on cooperation and exchange. As such, the language includes many words that describe sharing and few that describe individual ownership.

Creating a full-blown new language often cements a kinship felt among its speakers — whether that kinship is rooted in religion, common social practices, or ancestral ties. Usually, O’Shannessy says, speakers of a fledgling language draw on older word forms and start to incorporate patterns they hear, or they might make small changes to a language pattern that already exists. “And then, because they’re all speaking to each other, that new pattern stays.”

Some newly discovered languages, meanwhile, have very old roots. Linguist David Harrison, of Swarthmore College, and his research team, supported by the National Geographic Society, happened upon Koro Aka about 10 years ago in a remote region of northern India where dozens of Indigenous languages are spoken. Although Harrison is not sure exactly when Koro Aka originated, he thinks it may have existed for centuries.

In the northern Indian region where Koro Aka arose, people share a common identity, living in bamboo homes on stilts, growing rice, and raising livestock. But all of Koro Aka’s speakers — about 1,000 people — already speak another language called Hruso Aka. That has researchers wondering why a community went on to develop a new language, especially since Koro Aka speakers identify culturally with people who only speak Hruso Aka.

“The Koro Aka population is subsumed within a larger population of Hruso speakers,” Harrison says. “That’s the usual scenario where people would switch over to the majority language.” What’s more, Koro Aka does not resemble the languages spoken in closely surrounding villages; it is as different from them, Harrison says, as English is from Japanese. But Harrison thinks Koro Aka may have linguistic predecessors that have not yet been uncovered, so he and his colleagues are tracing ever-expanding circles around the Koro Aka community to gather clues about the language’s true roots.

Parallel quests to understand what nurtures new languages and what sustains existing ones have led social scientists to one key answer: Languages often survive when young people are speaking them on a regular basis. This language transfer can be actively encouraged, as in immersion schools in Native American communities, or it can simply occur naturally.

O’Shannessy is optimistic about Light Warlpiri’s future for this reason. Even though only a few hundred people know the language, nearly all of the youth in the community are absorbing it and speaking it frequently.

In general, fostering language vitality is one of anthropologist Gwyneira Isaac’s goals as director of the Smithsonian Institution’s Recovering Voices program. Though Isaac does not work specifically with emerging languages, she witnessed how cultural practices can help revive language after meeting a Canadian man who spoke the endangered Anishinaabe language. The man found some of his tribe’s maple syrup–making tools in a cabinet at the Smithsonian and was so excited that when he returned home, he produced a series of videos about syrup-making using phrases from his native tongue.

Young people in his community hear the language when they watch the videos, but they also encounter aspects of their cultural heritage. “This small thing of opening a cabinet turned into this journey,” Isaac says, “building the collective knowledge which is really at the base of language.”

When young people no longer speak a language, however, its prospects for survival may dwindle. Traditional societies around the world have suffered repeated traumas related to displacement, as, for example, when the U.S. government pushed Native American people onto reservations and forced their children to attend Western schools between the late 19th and late 20th centuries. Indigenous peoples in Canada and Australia received similar treatment. These policies disrupt generational links and may lead to the death of established languages. Dominant languages like English, introduced from outside, can also threaten the survival of less common languages over time.

And sadly, just because the linguistic community has only recently identified a language does not mean it’s invulnerable. Recently identified languages can disappear just as easily as those recognized for decades. Koro Aka, for instance, may already be at risk of slipping away, since there are few Koro Aka speakers under the age of 20. “A process of language shift is underway,” Harrison says. “Younger generations are using it only sporadically. It’s definitely in decline.” Even so, he reports, a small group of young Koro Aka speakers is putting up a valiant fight to save the language. Some even appeared on the National Mall in Washington, D.C., recently to share the Koro Aka language and culture with visitors around the world.

The youthful Koro Aka speakers on the mall may have grasped something many of us do not: the rewards of keeping a rare language alive even if a more common tongue would suffice. Languages supply the very framework on which our thoughts coalesce — a framework that is completely distinct in each language and gives rise to distinctive modes of thinking and expression.

Over time, the structure of each newly discovered language grows to support a community’s history, folklore, and scientific innovations — a world unto itself that may be threatened if the language disappears. “People don’t fully appreciate the vast body of knowledge contained within any language,” Harrison says. “What does Koro Aka have to say that we never knew? These languages have a contribution to make.”

Elizabeth Svoboda is a journalist and author of What Makes a Hero?: The Surprising Science of Selflessness.