When Wolves Adopt Their Rival’s Pups

In a lupine game of thrones, pack strength and diversity wins out over death and bloodshed. 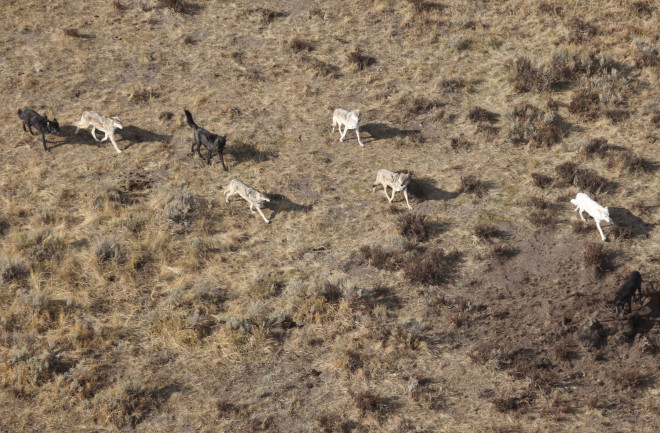 It’s one of evolution’s most brutal parables: male lions that displace a rival from his pride more often than not kill his cubs. Leonine logic and instinct dictate that energy is better spent preserving the genetic line of one’s own cubs than those of a dethroned adversary. Quickly dispatching his heirs speeds along that process by bringing their mother into estrus sooner.

Though it might seem counterintuitive in light of the infanticidal ways of other animals, gray wolves (Canis lupus) tend to do the opposite. New research out of Yellowstone National Park highlights an intriguing wolf behavior: When males take over a pack, either killing the dominant male, exiling him, or forcing him into a subordinate role, they usually adopt the existing cubs. Killing them would not prime their mothers for breeding — wolves come into estrus only once a year regardless — and the pack as a whole benefits from increased numbers, as the saga of the Wapiti Lake pack dramatically illustrates.

The paper tells the tale of three young males from the Mollie’s pack banding together in 2016 and, over a two month period, evicting the Wapiti Lake pack’s dominant male (designated 755M). They ultimately raised his four cubs with assistance from his former mate and their older daughter (1091F).

Adoption has been observed in wolves before. Co-author Rick McIntyre, who has tracked wolves in Yellowstone for nearly 30 years and written several books on the subject, notes that famed male 8M adopted pups when he joined a pack whose patriarch had recently been shot. His adopted son, 21M, later did the same for another pack who lost its alpha.

The 2016 event, however, was unusual in several ways. For one, the conflict occurred during the summer months, when aggressive encounters between rival packs are typically less frequent than they are during the winter. During these times of scarcity, wolves are more prone to wandering and thus enforcing the boundaries of their territories. It is unclear why the Mollie’s pack made this atypical incursion.

More strikingly, 755M lingered after he was initially run off by the youngbloods that eventually supplanted him. Typically, these transfers of power are abrupt. 755M however was persistent and visited his cubs on a number of occasions following his ouster. The researchers attribute this to a combination of paternal instinct and social savvy.

“He already had a lot of prior experience breeding, knew how to interact with adults, and probably had multiple interactions with other packs,” explains co-author Jack Rabe, a biological technician with the Yellowstone Wolf Project. “That might have enabled him to test the waters, to look at this situation, and see if it might be possible for him to stay as a subordinate.”

His expulsion, though, was final. The three invading males prevailed and after mid-August 2016, 755M was not seen with the Wapiti Lake pack again. Though he finally turned tail, he is believed to have reestablished dominant status and bred again with a new pack some 40 miles away — an astonishing feat for an eight-year-old male well past his prime. His deposal was in fact the second time he was forced to move on; an earlier mate was killed by hunters. So, in a remarkable testament to lupine resilience, he actually fathered pups with three different packs.

While the vicissitudes of 755M’s life make for a narrative of Shakespearean scope, the fallout from this canine coup resulted in a net positive outcome for the Wapiti Lake pack — and perhaps for the park ecosystem as a whole. The researchers hypothesize that the dominant female and her eldest daughter made a strategic alliance with the invaders, who themselves increased their potential breeding opportunities. Pack size in wolves is tightly correlated with survival.

“The bigger the pack you have, the more likely you are to win a territorial conflict, which is a leading cause of death for wolves in Yellowstone. It can help make your pack stronger,” says lead author Jeremy SunderRaj, a biological science technician for the Wolf Project. “It's also important in taking down large ungulates.” The adoption thus benefitted all members of the newly constituted group.

The advantages of larger pack size explain the caretaking impulses in this profoundly social species. “When wolf pups are young, their snout is really short,” observes McIntyre. “They have little ears. They have relatively big eyes. There seems to be something that's really appealing about those facial features to [adult wolves].” Indeed, even non-parents usually respond to hungry wolf pups by regurgitating food, suggesting a hardwired response — similar to the one that provokes our own protective feelings toward human infants and baby animals. Taking care of juveniles, in fact, results in a net social good.

The Wapiti Lake pack, originally seven wolves including the pups, is now the largest in the park — and thus a significant ecological force. “Wolves that resulted from that displacement event have now gone on to join four other packs,” SunderRaj notes. More than 40 individuals trace their heritage to the once-lowly Wapiti Lake pack.

In a genetic sense, at least, the invasion even benefitted 755M. His eldest daughter bred with the invading males and one of the female pups he was forced to leave has also bred, perpetuating his lineage. He himself would have only been able to breed with his mate, as he was related to all of the other Wapiti Lake females. Wolves instinctively avoid inbreeding.

The dominant female, now white with age, is at 11 the oldest wolf in Yellowstone. Had she not allied with the three black brothers from the east, she might have perished in a conflict or succumbed to starvation. And her offspring with her earlier mate might have met the same end. Of her initial allies, only one, 1014M, survives and remains with the pack. His brothers, who later left the Wapiti Lake pack, were both killed. 1015M is believed to have been poached after his tracking collar was found with a bullet hole in it in 2020 and 1155M was scandalously slain by Montana governor Greg Gianforte in February 2021. Gianforte was issued a warning because he trapped and then shot the wolf without having completed a wolf hunting education course.

If any of Wapiti Lake’s members wander outside the park, they are increasingly likely to meet a similar fate. Draconian new legislation in Idaho and Montana now allows for wolf hunting on a massive scale. For all their skill at the lupine game of thrones, these wolves and others in the region are no match for ATVs and automatic weapons. The fate of their kingdom now lies in the hands of conservationists and legislators, far from the forested valley where, with sharp teeth and ancient cunning, they still eke out a tenuous existence.