From saving monarch butterflies to documenting the climate crisis, citizen scientists are reshaping science -- and helping drive what questions are worth asking. 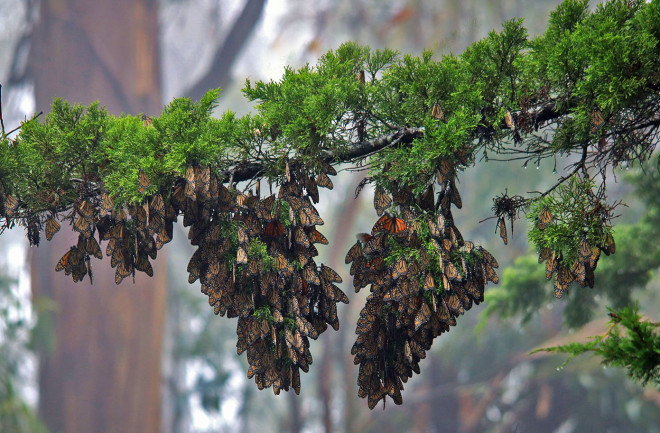 For decades, citizen scientists have been helping researchers tag, track and count monarch butterflies on the annual migration across North America. The work has helped unravel the mystery of where monarchs go, and also revealed their population drop. (Credit: Joanna Gilkeson/USFWS)

Over the centuries, the credentials needed to carry out scientific research have been in flux. Only recently has science become an occupation. In earlier days, science was something for those with the luxury to dedicate their leisure time or spiritual time to follow their curiosity.

In the 1600s, Antonie van Leeuwenhoek discovered microorganisms. His professional background? A cloth merchant who learned to make excellent lenses to judge the weave of fabrics. Eventually, he made lenses more powerful than microscopes at that time, which allowed him to curiously examine mucky pond water and plaque on teeth and find tiny life, earning him the title of father of microbiology. Gregor Mendel filled many of his days as a monk with experimental breeding of pea plants to understand how traits are hereditary. That earned him the title of father of genetics. Charles Darwin was a companion to Captain FitzRoy of the Beagle with time to see the world before planning to return and become a parson. Darwin’s later days were part of a shift in science.

Not only was science becoming a profession, the precursors to citizen science was beginning: Darwin and others started crowdsourcing for data through letters in which people shared their observations from around the world. In more recent history, fellow citizen scientists have continued to accomplish the remarkable.

Citizen science has contributed hugely to entomology. The mystery of monarch butterfly migration had long eluded scientists until Fred Urquhart and Norah Patterson began experimenting with techniques to affix unique tags to butterflies. Once these scientists identified a way to attach a tag to the butterfly without harming their sensitive wings, they realized that more people were needed to help them tag as many monarchs as possible. In 1952, they asked for the help of thousands of volunteers and started a monarch tagging program, which eventually became the modern-day Monarch Watch.

Then, in the mid-1970s, the first tagged monarch was spotted in Mexico. It turned out to be tagged by a Minnesota school teacher and two of his teenage students, which led to the discovery of the long-distance monarch migration from North America to Mexico in the fall and the return in the spring. The breakthrough was possible because thousands of volunteers had been capturing and tagging the wings of monarchs with postage-stamp-size stickers for decades. To this day people continue to tag monarchs and bring more discoveries, like making us aware of their current population decline.

German workers spray DDT to kill off potato beetles in the 1950s. Work by citizen scientists eventually helped show the harm the pesticide was inflicting on the environment. (Credit: Wikimedia Commons)

The modern environmental movement was also inspired by citizen scientists. Rachel Carson’s seminal book, Silent Spring, revealed the dangers of the pesticide DDT. Predatory birds, such as peregrine falcons, became endangered species because DDT thinned their eggshells. The discovery that their eggshells were thinning was possible because egg specimens found in museums had thicker eggshells. Non-professionals — citizen scientists — had collected those eggshells before the manufacturing of DDT began. (The hobby of collecting wild bird eggs was outlawed in the United States in 1916 with the Migratory Bird Treaty Act, which protected migratory birds, including their nests and eggs.)

In the mid-1990s, citizen science was key to climate change negotiations. British scientists found that birds were laying their eggs earlier in the year because of climate change. The entire dataset, with hundreds of thousands of nesting records, was the result of decades of observations by birdwatchers scattered across England. In making the case for the Kyoto Protocol (the international treaty about climate change action), the British government relied on that research to show that climate change was not a “future” problem but a “now” or urgent problem because it was already affecting life on Earth.

Today, with the internet and smartphones, science is in flux again. Millions of people, each with their own occupation (and many too young to have an occupation yet), share their observations and help process data. Volunteers work online to transcribe thousands of old letters, some originating with Darwin, others from Shakespeare, and others from war diaries. People are needed to turn handwriting into digital text because automation with optical recognition so ware can’t decipher handwriting as well as the human eye.

Fields like biochemistry advance because people use their free time as players in online games because the human mind is better at spatial reasoning than computers. In the Eterna game, players design RNA, the blueprints that make proteins. In Foldit, a game to solve puzzles of how proteins fold, some players discovered the folded shape of a particular protein associated with aids in monkeys.

As environmental and health sensors like Fitbits and air-quality monitors become lower cost, people without science credentials are assessing the quality of their environment, providing a check on industries to make sure regulations are followed. In ports like Oakland, California, with significant truck traffic, and in New Orleans, Louisiana, with petrochemical refineries, communities organized by the West Oakland Environmental Indicators Project and Louisiana Bucket Brigade have discovered excessive exposures to pollution where scientists and regulatory enforcers have failed to look.

Citizen scientists discovered that endangered monk seals are trying to make a come back in the Mediterranean. (Credit: Shutterstock)

Across the world, eyes of citizen scientists have discovered that endangered monk seals were attempting to recolonize the Mediterranean Sea, that invasive ladybirds in England were rapidly expanding their range, and three new species of dancing peacock spiders in Australia.

Looking across history, what’s revealed is that in many areas of study the only way to keep advancing the frontiers is for scientists to collaborate, not just with each other, but with everyone.

To learn more about citizen science projects you can join, visit SciStarter.org.

The Future of Citizen Science

In its richest form, citizen science has the power to transform science and society. Rather than simply recruiting volunteers or producing cool new tools, citizen science reshapes central notions of science and power: the roles of experts and the public, the accessibility of tools and data, and the kinds of questions that are worth asking.

As this movement continues to grow, its future isn’t guaranteed to be entirely smooth or predictable. The direction it takes over the coming decades will, fittingly, be determined by developments from nearly all sectors. Government agencies will be called on to respond to the will of the people while navigating global research priorities and policies. Industry and scientists will be forced to grapple with intellectual property considerations when their core customers demand more access to data and open tools. And anyone will have the potential to shape fields of research and related policies, globally and in local communities.

Citizen science is, in many ways, a canvas with much open space remaining to be filled. And it’s a movement that will undoubtedly shape your life, from finding a cure for Alzheimer’s disease to gathering data about pollutants in your own backyard. Now’s the time to explore the world of citizen science and look forward to the day when it is such an embedded part of our identities and lives that we no longer need any qualifier . . . it will just be called science.

From The Field Guide to Citizen Science: How You Can Contribute to Scientific Research and Make a Difference by Darlene Cavalier, Catherine Hoffman and Caren Cooper. Copyright © 2020. Reprinted by permission of Timber Press.