When Rome fell civilization did decline 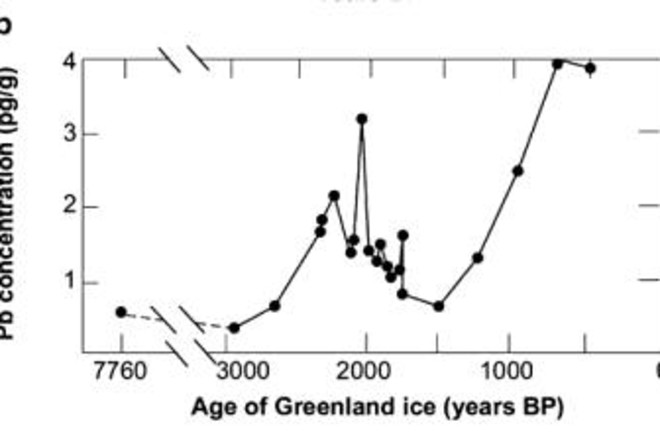 Cite: Persistent Pollution - Past, Present and Future Before the Holidays I mentioned that I was rereading Bryan Ward-Perkins' The Fall of Rome: And the End of Civilization. Why do I hold this book in such high esteem? Because of figures such as the one to the left. Granted, this chart is not from The Fall of Rome, but that book has an extensive bibliography which drew me to research on long term trends in pollutant concentrations. What you see illustrated are variations in the concentration of lead in ice cores from Greenland. Why is lead so important? Because it is a noxious byproduct in various primitive metallurgical processes.

. In short the fall of Rome was the end of civilization, and what came after was coarser and more elementary in character. This may seem "common sense," but it is actually a matter of some dispute and debate in the academy. When discussing this issue there are two primary objections which always seem to come to the fore. First, after the de facto collapse of the West Roman imperium in the first half of the 5th century there were other societies of importance and grandness on the historical stage (see The Inheritance of Rome, When Baghdad Ruled the Muslim World, and China's Cosmopolitan Empire). Far to the east of faded Rome Tang China's glory waxed in the nadir of the European regression between 600 and 750. More well known to Westerners, the same period saw the apogee of Arab Islamic civilization. But the data above indicate that the industrial production of these two polities did not match that of the period around the peak of the Roman Empire. I refer here to period, because of course the Roman Empire flourished at the same time as Han China, and Sassanian Persia. The collapse of the 5th century was not a collapse of civilization as such, but of the western terminus of the oikoumene. And this decline was not compensated for by greater vigor in the Islamic center, or Chinese east.

Marcus Aurelius, 2nd century A materialist perspective has the elegant attribute that it is less malleable in the hands of those with stylistic polish and the will and skill to engage in selective massaging of sources. I can assert plausibly I think that that the classical civilization which produced Thucydides, and later Polybius, Tacitus, and Ammianus Marcellinus, was superior in the fineness of its high culture than that in which Jordanes or the Venerable Bede flourished. But if an individual is clever, erudite, and set in their proposition, it will be impossible to definitively refute someone who holds that 8th century Anglo-Saxon England was no less cultured than 5th century Athens or 2nd century Rome. And if the exposition of the counter-intuitive position is placed in the hands of a cunning sophist, and the one who endorses common sense is plain and less learned, then the battle is already lost before it is begun. Terms like "superior" and "cultured" are slippery, and the whole enterprise of grading societies is held in bad odor in our age. A barrage of facts curated with intent to support a preposterous thesis can overwhelm simple sincerity. But the quantitative consequences of material production are not as contextualized or easily problematized. It is simply fact that proto-industrial production in the post-Roman world had regressed, and with it an array of material comforts and minor luxuries vanish from the record or become very rare. The dull can defeat the sly simply by pointing to the angle of the line on a chart. A broader and more fundamental issue is that one must question how one judges the rise and fall of civilizations and society. From an orthodox Muslim or Christian perspective the collapse of Rome in the 5th century was an unfortunate incident, but ultimately secondary to the reality that the western half of the civilized world was to soon to be permeated by the presuppositions of their respective religious creeds. St. Augustine's The City of God is only the most extended and thorough of many contemporaneous Christian apologetics which purport to explain the peculiarity of the collapse of the civilized (i.e., Roman) world just as the old pagan high traditions were finally superseded by Christianity. This is why I say that I find The Fall of Rome persuasive for partially normative considerations. Though I am willing to grant the superiority for various reasons of Christianity or Islam over the animistic primal religion of Republican Rome, or the Mystery Cults of the High Empire, I weight the extinction of industrial production of pottery and the reversion to localized barter economies as of greater consequence. Matter is more critical necessary precondition for civilization than mind. I doubt that Tacitus was anymore brilliant than Bede, but the former shone with more absolute greatness of the cultural capital which he could mine and leverage. The withering of the Christian church in the Balkans and England is a testament to the fact that higher religion themselves are preconditioned on a minimal level of social complexity and organization. It seems likely that by the 5th century Christianity succeeded in spite of the collapse of the West Roman Empire, not because of it. Rather than being a minor problem of history, the disturbance of the Roman order was a disaster for institutional Christianity, from which it only slowly recovered, still maintaining its original Roman outlines despite the Germanic interlude. There are often debates as to whether fields like anthropology or history are humanities or social sciences. The truth is almost certainly both. In many ways I find archaeologists, particularly those of prehistory, theory-poor. Rather, what theory they attach to their wealth of material remains seems to be imbibed from thespirit of the times. Before World War II they were keen to illustrate the congruence of their material results with a migrationist narrative, while after World War II they rejected such models. But though archaeology can often tell us little directly in and of itself about the creators of a material culture, the flux of that material culture can tell us a great deal about aspects of that given society's material workings. Technology is predicated on basic laws of nature, and those laws of nature produce constraints in the possibilities. Though it is possible in theory that Europeans between 500 and 1000 AD developed complex social systems which were also more ecologically friendly than those of antiquity (so as to generate less pollution in the material record), a more parsimonious explanation seems to me to be that in fact those societies were simpler, and that the order and institutions necessary for large scale proto-industrial production which had evolved organically from 1st millennium BC down to the Roman era had disappeared. This is simply not a matter of discourse, dialogue, debate, or contexualization.