When is it OK For Archaeologists to Dig Up the Dead? 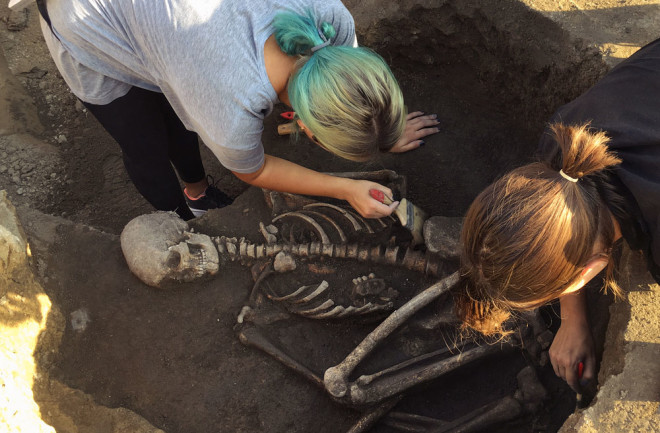 Before deciding to dig up human remains, archaeologists must first ask themselves a complicated set of questions. (Credit: Masarik/shutterstock)

Banana was code for human bones, on one archaeological dig where I’ve worked. We were excavating a cemetery, several thousand years old, and had permits from the appropriate authorities. However, certain religious groups in the area had a history of protesting any destruction of burials, so we kept our work discrete.

We packed excavated skeletons in boxes labeled “bananas” and referenced the fruit when discussing the project in public.

Our team had legal approval and scientific justification, but those bananas represent a conundrum: When is it acceptable for archaeologists to disturb the dead?

The short answer: “There’s no blanket answer… Sometimes, yes definitely. And sometimes it’s the right thing to do, not to excavate,” says Duncan Sayer, an archaeologist who has written a book on the ethics of burial excavations. To appreciate his point, consider some hypotheticals. Could archaeologists exhume your grandparents or great-grandparents? What about your ancestors 1,000 years back? Does it matter whether burials were intentional — tombs filled with precious goods — or accidental, like a landslide that fatally engulfed people? Do an ancient culture’s beliefs about the afterlife make a difference? What if a cemetery is threatened by rising sea level or construction of a much-needed metro line?

I could keep spinning scenarios, but you get it: whether to dig or not, depends.

To be clear: “It’s not okay to excavate human remains simply because we’re archaeologists and that’s what we do,” says Sayer, who’s also a lecturer at the University of Central Lancashire, England.

So then, when is it okay?

First, there are laws, which vary by country, state and context, and must be interpreted. In most U.S. states, burials older than 100 years can be excavated (eliminating my great-grandparents) provided researchers obtain permission from the local government and presumed descendants or culturally affiliated groups. The most important national law, the Native American Graves Protection and Repatriation Act(NAGPRA), passed in 1990, has similar stipulations for Native American remains on federal or tribal land.

Then, there are ethical guidelines, established by professional associations of archaeologists and bioarchaeologists (specialists who study human skeletal remains), such as the Society for American Archaeology (SAA) and the American Association for Physical Anthropologists (AAPA). They call for the advancement of scientific knowledge, respectful consultation with people affected by the research (like the dead’s descendants), and protection of archaeological remains.

These goals represent the interests of three groups: researchers, communities with ancestral or cultural ties to the burials and the dead themselves. When deciding whether to dig, archaeologists weigh the costs and benefits for each group. Sometimes these interests align, and in other cases, one takes priority.

Recognizing this tension, the AAPA code of ethics states, “it is inevitable that misunderstanding, conflicts, and the need to make choices among apparently incompatible values will arise. Physical anthropologists are responsible for grappling with such difficulties and struggling to resolve them.”

The SAA recommends that conflicting views “be resolved on a case-by-case basis through consideration of the scientific importance of the material, the cultural and religious values of the interested individuals or groups, and the strength of their relationship to the remains in question.”

These laws and guidelines aim to prevent repeating the wrongdoings of past researchers, who were undeniable grave robbers. In the 19th century, prominent archaeologists plundered Native American burials with no regard for descendant communities. To this day, these remains comprise the vast majority of skeletons held in U.S. museums and other collections. Although repatriating indigenous remains is a main objective of the NAGPRA law, many bones in museums are still unaffiliated, meaning they have not been linked with a contemporary group for return.

Digging up human remains can run against the cultural and religious beliefs of certain groups. (Credit: Masarik/shutterstock)

Digging up human remains can run against the cultural and religious beliefs of certain groups. (Credit: Masarik/shutterstock)

So… When to Dig

Bound by legal and ethical guidelines, archaeologists must determine when to dig.

In the category of “yes definitely,” Sayer places rescue excavations, when known burials may be destroyed by natural hazards or construction projects. “But if those remains are not going to be destroyed, what is the value in excavating them?” he asks rhetorically.

To justify disturbing unthreatened burials, archaeologists need clear, important research questions that cannot be answered without excavation. And this can certainly be the case. Human skeletons are an invaluable record, providing information about health, demographics and diversity in past societies, which may be impossible to glean from other lines of evidence like artifacts or texts.

Beyond that, researchers need a plan and personnel. They need enough time and resources to excavate, examine and either rebury the remains, or preserve them in perpetuity — the legal term for forever.

Lastly, it’s irresponsible for any one project to dig an entire site or all its burials. As technology advances, future archaeologists will have better methods for collecting and analyzing bones, artifacts and sediment. In just the past 10 years, new techniques have been developed for extracting DNA from fossils and food molecules from ancient dental plaque. Who knows what methods will be available in another 10 or 50 years. Excavating everything now would limit future research.

In August 2018, researchers reported that they'd excavated an early monumental burial site near Kenya's Lake Turkana. The site, which could be as much as 5,000 years old, features a large mound surrounded by megaliths, stone circles and cairns. (Credit: Katherine Grillo)

In August 2018, researchers reported that they’d excavated an early monumental burial site near Kenya’s Lake Turkana. The site, which could be as much as 5,000 years old, features a large mound surrounded by megaliths, stone circles and cairns. (Credit: Katherine Grillo)

Letting The Dead Tell Their Story

Sometimes human remains are the only way learn the story of past peoples.

Just ask bioarchaeologist Elizabeth Sawchuk, who has personally excavated about 60 skeletons and studied over 200 from East Africa that range from 2,000 to 8,000 years old. During this period, Africa saw major social and environmental changes, including the spread of farming, herding and metal production, as the Sahara dried into the desert we know today.

By studying the bones from this context, Sawchuk is reconstructing health and relations among people with no recorded history. “Human remains are the only direct link we have to the past… all we have left of the people who were actually there, living through these times of big change,” says Sawchuk, a post doctoral researcher at Stony Brook University.

With support and collaboration from local communities, her research has shown that around 4,000 years ago in present-day Kenya, the drying of Lake Turkana forced diverse peoples into close proximity. According to Sawchuk, “You see these populations bumping up against each other, and instead of fighting or killing each other… they build these beautiful, amazing monumental cemeteries around Lake Turkana where they bury hundreds of their dead together.” The monumentscomprised stone columns encircling mass graves with hundreds of men, women and children wearing adornments carved from ostrich eggshells, hippo ivory, gerbil teeth and more.

“It actually ends up being a really cool story and these are the kind of stories we want to be able to look at and tell,” says Sawchuk.

And it’s one we wouldn’t know without digging some burials — responsibly and ethically, advancing scientific knowledge, while respecting the dead and the living.