When Hummingbirds Visit, This Flower Pops Open like a Jack-in-the-Box 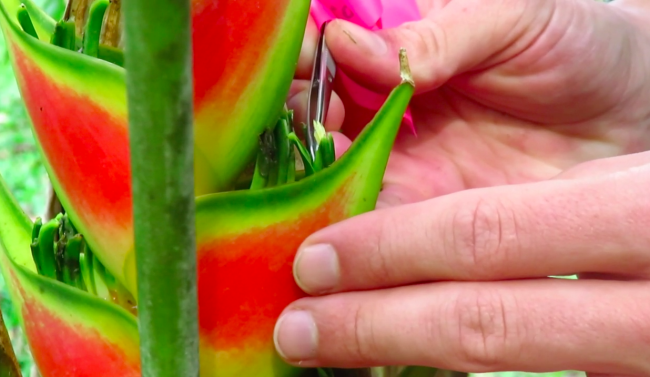 Most plants are sneaky. You think they're staying put, until one morning when you wake up to find your houseplant bent toward the window, or a vine that's clambered up your fence. But other plants operate more quickly. They close up their leaves at a touch, or fling their pollen onto a bee. Researchers discovered a previously unknown bit of plant acrobatics in Costa Rica. There, a flower works like a jack-in-the-box to shove its stamens into a hummingbird's face. Dusty Gannon, a PhD student at Oregon State University, and his coauthors were in Costa Rica to study a group of plants called Heliconia. The researchers wanted to know what pollinators are most important to these showy, claw-shaped flowers. Some plants are visited by many different pollinators, Gannon explains, but only rely on one or a few of those species to actually get the job done. The researchers knew that at least one species of Heliconia only accepts pollen when all its nectar has been drunk up—in other words, Gannon says, after "the flower has been visited by a hummingbird with a long bill and a big appetite." The flower isn't interested in being pollinated by bees or other bugs. To test for pollinator pickiness, the scientists planned to dust flowers with pollen by hand and see whether the fertilization process started. But in a species called Heliconia wagneriana, they weren't sure where to start because they didn't know what a mature flower looked like. "I was inspecting all the flowers on a plant when I touched a flower and the stamens popped out," Gannon says. "I laughed, and then tried a bunch more." He'd discovered a spring-loaded mechanism within the flowers. The stamens (the plant's male parts) start out in a coiled package sealed within the flower. When a bird sticks its beak into the flower to reach the nectar—or a scientist pokes it with forceps—the stamens burst upward. The stamens take about two seconds to fully extend. This is also the amount of time a hummingbird usually spends feeding at a single flower. The researchers think the plant pushes itself against a hummingbird's head to help make sure its pollen sticks. The jack-in-the-box trick could also help protect the pollen while the plant is waiting for a hummingbird to arrive. Exposed pollen can dry up quickly, especially in the conditions where H. wagneriana flowers. Hiding the pollen also protects it from insects that might see it as a snack. Gannon says the spring-loaded action he discoveredis similar to that of the bunchberry Cornus canadensis, which catapults its pollen into the air. If it bothers hummingbirds to have pollen pushed in their faces, at least they can feel confident that they're H. wagneriana's favorite pollinators. https://youtu.be/KFlPUzTw8DQ Image and video et al.: Gannon et al., Ecology.