When competition is intense, viruses spill over into new hosts 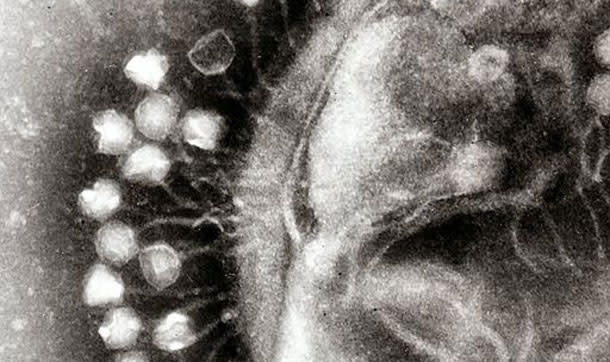 When you think about viruses, you might wonder how they infect, how they spread, and how they kill. These questions are of natural interest—you, after all, could play host to a grand variety of lethal viruses. But do remember: it’s not all about you. A virus’ world contains not just potential hosts, but other viruses. It has competition. This simple fact is often ignored but it has profound implications. In a new study, Lisa Bono from the University of North Carolina has shown that competition between viruses can drive them to spill over into new hosts, imperilling creatures that they never used to infect. Rather than focusing on the viruses we know and dread, Bono worked with phi6, a virus that infects and kills bacteria. This bacteriophage (hereafter just ‘phage’) looks like a lunar lander, that docks onto the surface of bacteria with spindly ‘legs’ and injects its genetic material through a syringe-like tube. Bono worked with a phage strain that infects Pseudomonas syringae, a bacterium that causes disease in plants. It favours this species above all others. Bono added her phages to tubes containing either its normal host P.syringae, or a close relative—P.atrofaciens or P.glycinea. She delivered the viruses at two different concentrations, one a hundred times greater than the other, to simulate either weak or strong competition between them. After several rounds of infection, Bono found that the phages that faced stiffer competition for their normal host bacterium , also quickly evolved to infect an alternative one. They changed from specialists to generalists. And they didn’t lose much in this transformation—they could still infect P.syringae almost as effectively as their specialised cousins, and often out-competed and replaced them. These ideas aren’t new. Several scientists had predicted that species could evolve new behaviours, or even split into two, because of competition. If everyone’s fighting, some individuals would fare better by exploiting a new resource, even if it’s not as good as their usual fare. Put it another way: if everyone is competing over chocolate, you’ll eat well if you switch to apples, even if that’s the less enticing option It’s a reasonable idea, but experimental evidence is rare. Here’s one of the few examples: in 2001, Daniel Wolnick showed that fruit flies adapted more quickly to food laced with toxic cadmium if they faced greater competition for food. Because of their rivalry, their tastes broadened. Bono’s study is another. The broader point – that competition between infections can make things worse for hosts – applies beyond viruses. It also has direct relevance to our own health. Here’s one example: Escherichia coli, a typically harmless gut bacterium, can cause disease in mice after it’s exposed to the threat of amoebas. That’s because the strains that can survive being eaten by the amoebas, are the same ones that can reproduce inside our own cells and cause disease. And another one: a normally harmless nose bacterium Streptococcus pneumonia becomes infectious when it battles against another species Haemophilius influenzae. Streptococcus surrounds itself with a thicker coat to ward off the white blood cells summoned by its competitor. In doing so, it become better armoured against our own immune system, and starts to cause disease. It’s germ warfare, and even though we’re not fighting, we still stand to lose. Reference: Bono, Gensel, Pfennig & Burch. 2012. Competition and the origins of novelty: experimental evolution of niche-width expansion in a virus. Biology Letters http://dx.doi.org/10.1098/rsbl.2012.0616