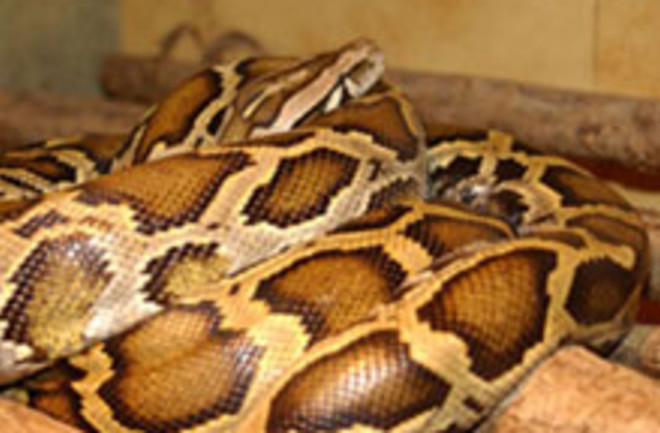 Yesterday it was Caribbean ants swarming Texas, today it's giant pythons raiding South Florida. The behemoth reptiles, which can swallow a dog or alligator whole and weigh up to 154 pounds, are multiplying at astounding rates in the southeastern part of the state—between 2002 and 2005, the authorities captured a total of 201 of them, a number that's more than doubled in the last two years. The pythons, which are Burmese, were brought to the U.S. as pets and then turned loose when they got too big for their owners to handle. The swampy Everglades of South Florida provide an ideal habitat for the snakes, so they made their way into the wild to begin breeding. And breed they did—the estimated giant python population in the Everglade region is now 30,000, and the snakes have started moving across the peninsula, making authorities in north Florida, Georgia, and Louisiana—all regions with similar swamplands for snake colonization—nervous. Despite their size, the pythons can swim like maniacs—up to 37 miles an hour—and the females can store sperm, enabling them to lay eggs for years after fertilization. They can also lay up to 80 eggs a year. As such, Frank Mazzotti, a University of Florida Institute of Food and Agricultural Sciences professor, estimates that the snakes may eventually populate the entire southern U.S. Which could mean it's a good time to start keeping your pets (and children) indoors.