When a Bee Falls In Water, It 'Surfs' Tiny Ripples to Safety

A flurry of wingbeats creates a pattern of waves that nudge bathing bees shoreward. 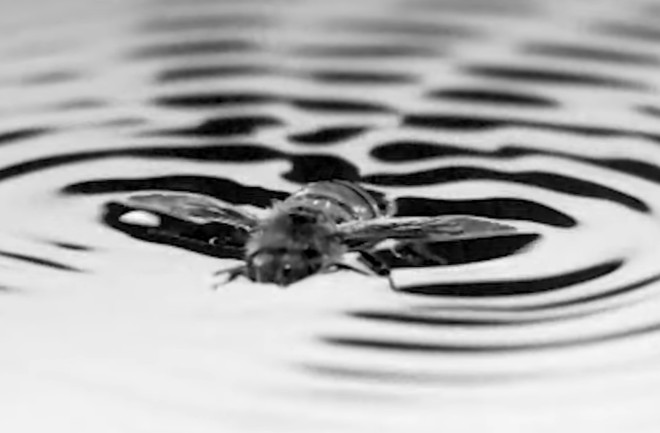 When a bee falls in water, it uses a flurry of wingbeats to surf to safety. (Credit: Caltech)

When bees accidentally land in water, their wet wings keep them from lifting off and flying away. So instead, the insects reach the water’s edge by becoming tiny surfers.

A close examination of how bees swim, published in the Proceedings of the National Academy of Sciences, shows they use their wings to generate small ripples that the insect can ride atop to move forward. Understanding the physics governing how bees navigate water opens up a new way to look at designing devices that fly and swim, says study author Chris Roh, a research engineer at Caltech.

This particular research project kicked off one day when Roh went for a walk near a campus pond and saw a bee struggling to leave the water. Sunlight hit the bee in such a way that Roh could see shadows of the ripples radiating from the swimmer on the pool's bottom.

Roh and his adviser, Mory Gharib, study how organisms function to help design materials that imitate those natural processes. Watching the bee's surfing struggles gave him an idea.

"This topic in general is core to my research,” Gharib says. “It started with fun, but turned into something much more elaborate.”

To simulate what Roh saw at the pond, he and Gharib gently dropped bees into a small pool lit up so that the same ripple shadows appeared. High-speed, zoomed-in video cameras caught every ripple as the bees paddled. Since every honeybee behaves a little differently, Roh and Gharib also made a mechanical replica of the wings to see what a standardized, perfectly predictable flutter might do.

Extreme close-up investigations of the real and fake wings showed the researchers what patterns the appendages make in the water. It turns out that bees beat their wings backward and pull water with them, kicking off a kind of tug-of-war between the wing and the water, Roh says. The wing also pulls water upward with it, creating waves that in turn propel the bee forward — albeit very slowly.

This is not an efficient process for the bee. Swimming kicks in as a survival tactic until the insect can get to land, and it drains their energy. If they're too far away, they'll drown.

So if engineers were to design, say, a drone that flies and swims, they might have to tweak the bee wing design for efficiency’s sake, Roh says. That’s where the duo’s research is headed next. After all, their profession is all about making systems just a little bit better. “As an engineer, we can make things more efficient and more effective.”