What's the Point of Making This Face When We're Scared?

If cartoonists ever pause in their sketching to ponder human evolution, they must feel grateful to the forces that shaped our fear expression. All it takes is a pair of extra-wide eyes to show that a character is freaking out. There may be a point to this expression beyond making artists' lives easier: widening our eyes expands our peripheral vision, and might even help other people spot the cause of our alarm.

"Our lab is interested in the evolutionary origins of emotional expressions," says Daniel Lee, a graduate student in psychology at the University of Toronto—in other words, "why they look the way they do." When we feel afraid, for example, is there a point to stretching out our eyelids and raising our eyebrows to the ceiling?

To explore this question, Lee and his coauthors first asked whether widening our eyes helps us see better. They had 28 volunteers look at a fixed spot on a computer screen while holding their eyes in a neutral expression, an expression of fear, or one of disgust. (Subjects acted out these expressions rather than, say, having a chair pulled out from under them before each trial. Lee points out that emotions themselves may also change our perception, but he wanted to study the effects of widened eyes separate from any psychological effects of fear on the brain. "We coached each participant on how to make fear and disgust expressions based on the Facial Action Coding System," he says.)

Subjects were tested with flashing images on the screen in their peripheral vision. Lee found that people making a disgusted expression—with the eyelids narrowed as in "Ew, get that out of my face"—scored the worst. People making a wide-eyed fear expression scored the best, with a useful field of vision 9% larger than that of people with a neutral expression.

Being afraid, then, may help us gather more visual information about whatever's threatening us in our environment. But does it also help us communicate that threat to our companions?

The researchers next used pictures of models' eyes expressing different emotions to create simplified, graphic eye images. (They didn't use real eyes because those might have conveyed extra emotional information, instead of only varying in wideness.) Subjects saw these eye images flash briefly on a screen, looking toward the right or left by varying degrees. Lee found that when the eyes were wider, subjects had an easier time telling which way they were looking. The results are reported in Psychological Science. 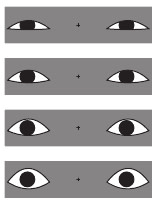 "We believe the widening eyes of fear...[are] a functional response for vigilance toward threat," Lee says. When we're scared, he thinks, widening our eyes helps us to see threats and to communicate their location to our group.

The researchers point out that human eyes are uniquely suited for this kind of communication: we're the only primate with a white sclera (the area outside the iris). In other apes and monkeys, this part of the eye is dark. It's yet another factor that cartoonists, no doubt, appreciate.