Every artifact has a story to tell. What makes a discovery meaningful for archaeologists may surprise you. 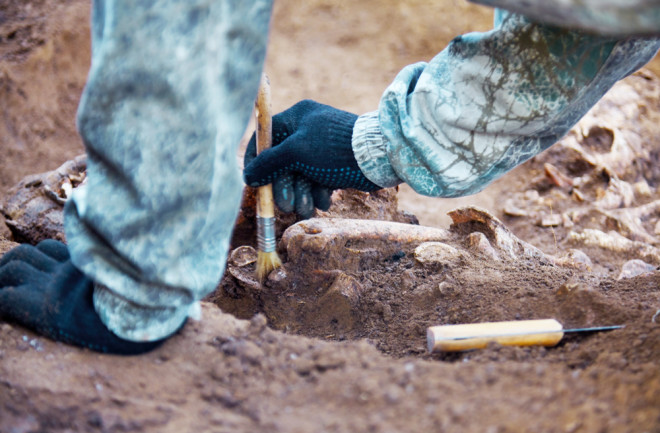 Archaeologists constantly field three questions from well-meaning folks with misconceptions about the job.

No. Dr. Jones looted artifacts without regard for cultural heritage laws or scientific methodology. Real archaeologists methodically excavate sites, documenting the location of every bit of pottery, bone and other remnants from past peoples.

2. So you dig dinosaurs?

Now this question is fair. But the short answer may sound inscrutable — a Levallois refit or manioc phytolith — or dull — a bowl, comb or donkey bone. These finds won’t enter high-security museum displays or draw crowds. What makes them meaningful is context: where and when they are from, and what that reveals about ancient people. For many archaeologists, their prize discovery helped solve a long-standing research question, overturned what scholars thought they knew, or surfaced at a memorable moment — perhaps their first day ever digging or the final hour of a grueling excavation.

Four rusty nails marked a lost site and a major discovery for Kathryn Ranhorn, a professor at Arizona State University. Several years ago, while a graduate student, Ranhorn was based near Lake Turkana in Kenya, a region that has yielded more than 300 fossils from pre-human ancestors between 1 million and 7 million years old. These include the first members of our genus Homo and earlier Lucy-like creatures.

But archaeologists, working around Turkana, have struggled to locate sites from the Middle Stone Age (MSA) — about 50,000 to 300,000 years ago — when our own species, Homo sapiens, rose. Our ancestors surely lived there, though, because scattered stone tools, typical of MSA modern humans, dot the dusty landscape. And a PhD dissertation, from the early 1990s, detailed excavations of a Turkana MSA site, simply called GaJj17. Its author, Allison Kelly, had since died and the site became lost.

That is, until 2015, when Ranhorn set out to find GaJj17, on her last day of research around Lake Turkana before wrapping up the excavation season.

Ranhorn recalls, "I had seen [Kelly's] report of the site. It was really cool, but we didn't really know where it was. At base camp, I had her hand-drawn maps and Google Earth, and I was looking at the gully shapes. I found one that kind of lined up and extracted the coordinates.

Some Kenyan collaborators and I drove out, and we kept going, kept going, 45 minutes from camp. I was like, ‘I don't know, guys.’ Then, we parked and just following the point walked for five minutes through this little gully.

It was sticking out like a sore thumb. The site was covered with stone tools, and I found these four rusted nails, all on top of a rock, from Kelly’s excavation. It was the end of a long day, the end of a long season. I felt like when I found it, it was like reconnecting with Allison Kelly, and carrying on the research that she did. We went back and excavated in 2016, 2017 and 2018."

Before starting her current PhD program at Harvard University, Melina Seabrook already uncovered an important find at Ur — one of the world’s oldest cities, in present-day Iraq. The Mesopotamian center flourished during the Bronze Age, some 5,000 years ago. Well-positioned on the banks of the Euphrates River, Ur merchants traded goods with people across the ancient world. Seabrook found proof of these ties while digging in a residential area of Ur in 2017. She unearthed a standardized weight, used to apportion goods, from the Indus Valley Civilization, which once stood in what is now Pakistan and northwest India.

As she tells it: "When we first found it we were like, ‘What is this cool, kind of square rock? Is it an inlay? Is it part of something bigger?’ One of the people who works with us is an expert in weights, and he [knew] it was from the Indus Valley.

This Indus weight at our site — which is, again, in Mesopotamia, not the Indus — it's this very cool [indicator that] ‘oh my gosh, there are these connections between the two!’ Not very frequently, mind you, but clearly this is one very solid example that the connections are there.

At a large site like Ur, [we were digging in] a very small residential portion. It's not a market or place we would expect to find merchants or traders working specifically with weights. [Which means] in this household context, they might have also had these connections."

Some 3,000 years ago, Polynesians started exploring the Pacific by canoe, settling island after island across a 4,000-mile ocean expanse. That far back, they also likely inked their bodies with tattoos — a practice continued in Polynesian culture to this day.

In 2009, Guillaume Molle, an archaeologist at the Australian National University, was excavating a site on the island of Ua Huka in French Polynesia. That's when he unearthed three mother-of-pearl combs. The artifacts were almost certainly used for tattooing, based on the fact that more recent Polynesians scraped ink into skin with similar combs, made of bone and other materials. Molle considers the combs his most memorable discovery in Pacific Island archaeology, his area of expertise. But as a teen, he found another unforgettable relic.

In his words: "I started to excavate as a volunteer when I was 16 or 17 in the north of France, where I'm from. We were excavating a medieval church from the 12th century. On the first day, after two hours, I found the head of an alabaster statue of Mary Magdalene with traces of golden hair. In terms of aesthetics and value that was probably the most amazing thing I've ever found. That was my first day ever as an archaeologist.

It's not related at all to my specializations now. The coolest things really were the pearl shell tattooing combs. They are beautiful objects, really finely manufactured, all from around 1,200 or 1,250 AD.

There are only 17 tattooing combs made of pearl shell that are known from the whole Pacific. All from between 1,200 and 1,400 AD and then they disappeared. The ones that Europeans saw when they arrived, in the late 18th century, were made of bird bone, dog bone and turtle shell.

Why did Polynesians abandon pearl shell? One of our hypotheses is blades made of pearl shell are very fragile and probably break more easily. People turned toward other kinds of materials. That's something that we are still investigating. We need to do some experimentation on pearl shell to see the physical [properties]."

Christine Lee, a professor at California State University, Los Angeles, has studied hundreds of human remains, but two skeletons stand out as her favorite discovery to date. The ancient women came from elite burials, dated between 147 and 552 AD, in northern Mongolia’s Airagiin Gozgor cemetery. During this period of regional unrest, scholars think the Ballad of Mulan originated. Though a Chinese story, the legend of a woman warrior probably spread from neighboring Mongolia, where women wielded considerable autonomy. By the 900s AD they could choose marriage partners and inherit property, and some became queens, leading armies and diplomatic moves.

But what we know about these women mostly comes from ancient texts, written by disapproving Chinese. Lee hoped to find skeletal evidence for powerful Mongolian women — specifically from periods before the historically known queens. Over four years she analyzed bones from 29 Airagiin Gozgor burials, looking for signs of wear and tear caused by habitual warrior activities like archery and horseback riding.

Says Lee, "There's a long history of women being in charge there [in Mongolia]. In this time period, which is before then, those women must have still existed. This must have been when the thought started that women could rule.

I looked at all of these burials not actually expecting to find anything. What are the chances you're going to come up with these women? Not that they're rare, but I don't think they're that common. You probably have to be pretty high ranking to be given that much freedom.

I looked at muscular skeletal markers — how their muscles are being used routinely — arthritis and trauma. There were two women who came up looking like they were doing exactly what men were doing. They were horseback riding. They were practicing archery. That doesn't necessarily mean they were warriors, but it does mean that they were probably able to defend themselves and their families, if needed to. That’s pretty badass."