What the Earliest Toilets Say About How Human Civilization Has Evolved

Latrines have been around for thousands of years. Though they haven't exactly always been sanitary. 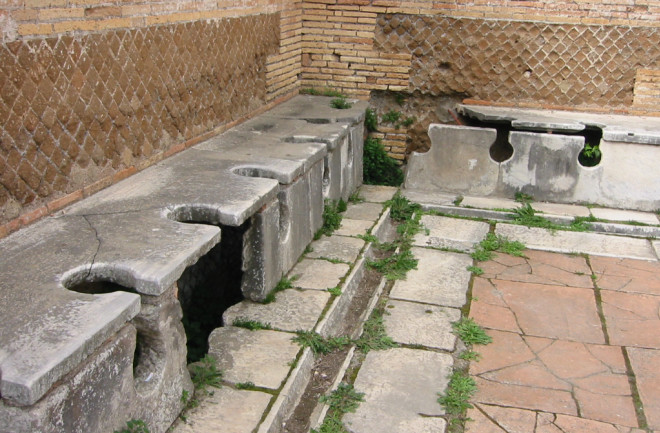 For more than 200,000 years humans were nomadic foragers, living in small groups spread over vast lands. Then, about 10,000 years ago, in several corners of the globe, some people settled down and started farming. Villages sprung up and grew into densely populated cities.

And that’s when poop became a problem. Urbanites could not do their business in discreet spots, sparsely scattered across the landscape. They had to defecate where they ate, slept and lived 24/7, alongside many other folks. We needed a new solution.

But archaeological evidence shows it wasn’t immediate. While chamber pots and cesspits were invented early on, millennia elapsed between the world’s first cities (about 6,500 years ago) and flushing latrines (between 3,000 and 5,200 years ago). Like most ancient technology, toilets seem to have been independently invented in several cultures — and went through many stages of innovation before becoming loos you’d like to use today.

So take a seat — perhaps on your own porcelain throne — and let’s delve into the ancient history of the toilet. It turns out latrines, and their contents, reveal a lot about the people of the past.

Potty history is patchy. Depending on construction materials and local climate, the traces of ancient bathrooms may or may not have survived the ages. And, in different times and places, archaeologists haven't always been interested in excavating them.

“There’s lots of very specific case studies, but … trying to draw it into a grand narrative is not easy,” says University of Pennsylvania archaeologist Jennifer Bates (who recently taught a university course on the archaeology of toilets — which may be the first of its kind).

“The oldest toilet is a really controversial topic. And everyone wants the earliest,” she says.

The title depends, of course, on how you define toilet. The word could mean receptors that expel waste into sewers, chamber pots emptied by hand or pits designated for defecation. But a pile of ancient poo is probably insufficient. For instance, fossilized feces from Neanderthals has been unearthed from roughly 50,000 years ago. “We could count that as a toilet, but it isn’t a specific space they set aside for doing the act,” Bates explains.

By about 4,500 years ago, Mesopotamians had built seats over cesspits. In their ancient cities, such as Eshnunna and Nuzi, archaeologists have found brick chairs coated with water-repellent bitumen. Waste would have dropped through an open slot at the base and traveled through clay pipes to cesspits.

One of the earliest flushing toilets, from Mesopotamia. (Credit: Antoniou, G.P. et al. 2016 Sustainability/Oriental Institute at the University of Chicago)

Credit for the earliest flushing toilets goes dually to the Minoans on the Mediterranean island of Crete and the Indus Valley Civilization of present-day Pakistan and India. Roughly 4,000 years ago, both societies had sophisticated plumbing and sanitation systems. Scholars say this water engineering was unrivaled until classical Rome (two millennia later), or even the 19th century.

One of these earliest known flushing lavatories was discovered at the Minoan palace of Knossos on Crete. Based on reconstructions, it consisted of a wooden seat perched over a “flushing conduit” — a tunnel that streamed water from a rooftop reservoir to an underground sewer. Other Minoan toilets, studied by archaeologists, were likely supplied with water from jugs. Similar flushing loos were developed around the same time more than 2,500 miles away by the Indus Valley Civilization.

But not everyone in these societies had a toilet connected to public sewers. Household to household, city to city, the availability of toilets depended on both individual wealth and infrastructure.

“Different bits of different cities would be connected up,” to sanitation systems, Bates explains. Identifying homes with toilets shows “who’s who in the Indus,” she adds.

Diagram of a toilet in the residential quarter of the palace on Minos. (Credit: Antoniou, G.P. et al. 2016 Sustainability)

During the Roman era (around 200 B.C. to A.D. 500), public bathhouses featured multi-seater, luxury latrines. These long stone benches, with evenly spaced holes, sat over a channel of continuously flowing water destined for the sewer. Another water trench ran along the foot of the toilet bench, which researchers think was for washing sponges on sticks, used like toilet paper.

The holes on those multi-seaters were closely spaced, so toilet use was far from private. Ancient texts from the time affirm this, describing latrines as spots for socializing.

Toilets-for-one (or two) could be found in some homes, but they probably caused more hygienic harm than good. The toilets were usually within or adjacent to kitchens because they also served as trash receptacles. The fecal and food sludge emptied into a cesspit or directly into the street, rather than the sewer system.

And defecation in the streets was a problem — common enough that researchers have deciphered signs and graffiti discouraging it.

For instance an inscription from Rome read: “Twelve gods and goddesses and Jupiter, the biggest and the best, will be angry with whoever urinates or defecates here.” One found at Pompeii was more blunt: “If you s--- against the walls and we catch you, you will be punished.”

More than bathroom history, archaeologists have gleaned considerable insights from ancient toilets. Studying these features, “gives you a huge amount of information and then you can start building archaeological narratives beyond just 'somebody went to the toilet,'” Bates says.

Fecal matter, recovered from toilets, holds evidence of diets and diseases. For example, researchers analyzed the contents of a latrine-fed sewer which was buried by the eruption of Mount Vesuvius in A.D. 79. Although it was connected to lower-class apartments and shops, the remains showed a healthy diversity of foods, including figs, eggs, olives, fish, shellfish, spices and herbs.

Other studies have focused on parasites. Analyzing a 2,000-year-old latrine on the Silk Road in China, a recent JAS: Reports paper found roundworms, tapeworms and other intestinal bugs, showing that travelers spread diseases across vast distances.

Toilets can also reveal social aspects of past cultures. As Bates explains, “where you go to the toilet, how you go to the toilet are divided by things like class, by gender, by religion.” The layout of lavatories at sites reflects social divisions and cultural beliefs about hygiene and propriety.

“There are very few things that every human has to do,” she says. “On a day-to-day basis … it comes down to eating, sleeping and pooping.” Toilets are archives of one pastime we all share.