What the Duck? Lady Mallards May Get Down With Bright-Billed Drakes to Avoid STDs 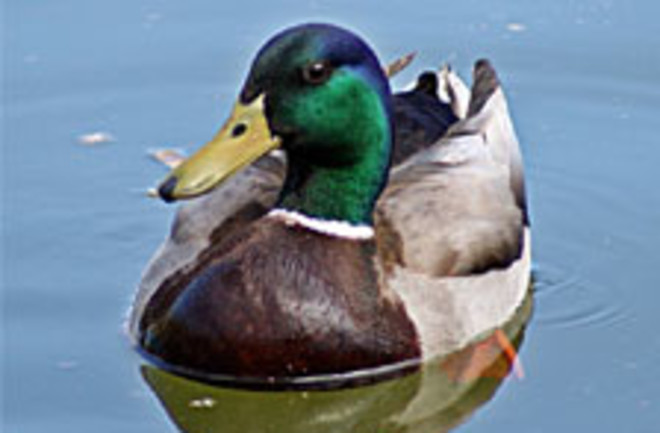 When it comes to mallard bills, brighter is better: A bright yellow bill is duck-speak for "I'm healthy," attracting more female ducks than dingy green ones. After discovering that avian semen has antibacterial properties, scientists then found that the semen of brighter-billed males killed more bacteria than the semen of darker-billed ones. It implies that by seeking out bright-billed males, female ducks are protecting themselves against bacteria-related sexually transmitted diseases. In her experiment, University of Oslo researcher Melissah Rowe collected semen from ducks (a feat unto itself---the videos in this link are amazing, but watch at your own risk) of various bill colors, and then tested how well the semen killed bacteria such as E. coli. She found that ducks whose bills had more carotenoids---an organic pigment that brightens bills---also had semen that more effectively killed E. coli. However, they discovered that the semen's effectiveness against the bacteria S. aureus wasn't associated with bill color, possibly implying that this bacteria doesn't pose much harm to ducks. Although they're not sure how much E. coli affects ducks, the scientists know that this bacteria can harm the quality of a human male's sperm. "A [mallard] that has lots of bacteria may be less able to produce high-quality sperm and father offspring," Rowe told LiveScience. Being evolutionarily programmed to mate with brighter-billed males, female ducks "may be able to avoid sexual transmission of pathogenic bacteria and copulate with males whose sperm suffer less bacteria-induced damage." The fact that bill color is correlated with a sperm advantage isn't too surprising. Past research has linked bill color with sperm speed and to the ability to beat off infections. Sexually selected traits in generally "can be associated with health ... and with parenting ability," Rowe told LiveScience. Next up, the researchers want to figure out what gives avian semen its antibacterial properties. Duck-semen antibacterial cream, anyone?