Parasites give us a new view on human evolution. 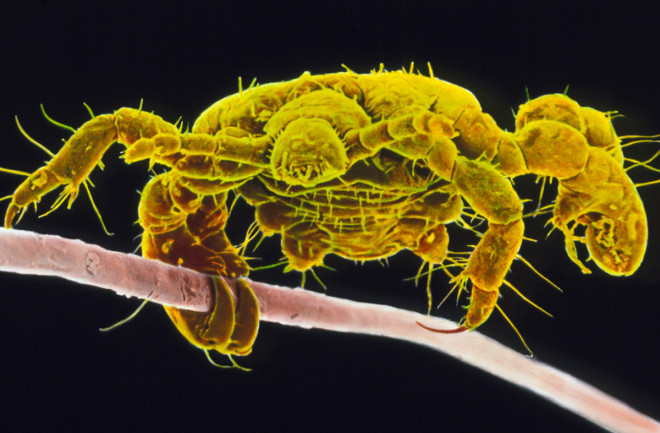 Fossils, artifacts and human DNA sketch out the story of our evolution — but fail to capture everything. To fill in the gaps, some researchers are consulting our tiny hitchhikers: lice, mites and other parasites that latched onto our lineage long before Homo sapiens even evolved.

“If they’ve gone through the same history,” says University of Florida biologist David Reed, “[they] must have something to say about that history.” It turns out the parasites can reveal aspects of our past — including the invention of clothing, unknown migrations and close encounters with other species — overlooked by traditional lines of evidence.

Of Lice and Men

After studying lice on gophers as a graduate student, Reed turned his attention to hominins — species on the human branch of the primate family tree. In a field full of anthropologists, “I was the weird louse guy,” Reed says.

Lice have feasted on humans for ages. The insects have been recovered from mummies and other human remains up to 10,000 years old — but our shared evolutionary story goes much further back. Bloodsucking lice have essentially been stranded on the mammals they’ve infested for more than 70 million years. When host lineages underwent speciation, migration or extinction, so did the parasites, leading to today’s louse diversity: more than 500 species sucking on particular mammal types. The evolutionary trees of host and louse grew in tandem — most of the time.

But when the trees don’t match up, it “sticks out like a sore thumb,” says Reed. That’s where evolutionary secrets lie.

Consider that humans carry three types of lice, distinguished by appearance and ecological niche — the ecosystem in question being us. Pthirus pubis, which resemble their nickname “crabs,” are pubic lice. Oblong Pediculus humanus comprises two sub-types, found in head hair and clothing, respectively. The latter feed on the body (like all lice), but uniquely nestle and lay eggs in apparel.

Reed and colleagues compared DNA segments of P. humanus lice collected from 20 countries. Their conclusions, published in a 2004 PLOS Biology paper, caused a stir: Certain louse lineages on living people carried DNA from the lice that lived on Neanderthals and other extinct hominins. The discovery came six years before ancient human DNA confirmed that our ancestors and Neanderthals mated, or even mingled.

The team detected this Neanderthal-to-sapiens transfer based on the human-hosted louse family tree they built from the samples they collected. The tree had three distinct branches, but only one branch followed human evolutionary splits. These bloodsuckers likely stuck on H. sapiens as they spread beyond Africa 50,000 to 100,000 years ago. The ancestries of people and parasite aligned here, diversifying during that timeframe.

“If there were no involvement with Neanderthals, and lice that were carried on Neanderthals, that (branch) is all that you would see,” says Reed.

Lice evolved in parallel with their hosts, including humans and other primates, revealing new details about our own history. Red arrows indicate events when a species of louse, adapted to live on another primate, hopped onto our ancestors, suggesting close contact between the two host species. All dates are approximate. (Credit: Alison Mackey/Discover)

But there were also those two other branches, sticking out like sore thumbs. One split happened around 700,000 years ago, when the ancestors of Neanderthals and modern humans also split. It seems these lice evolved on Neanderthals for hundreds of millennia, then hopped onto H. sapiens when the groups overlapped roughly 60,000 years ago. The study also identified lice that diverged some 2 million years ago — thought to be parasites that evolved on an even more distant, as yet unknown hominin relative.

Now backed by human genetics, the idea that distinct archaic human populations mingled is no longer controversial. But lice have more to say. While human DNA only records cases of interbreeding, parasite genomes can reflect interactions without sex. “We think that means we’ll see many more instances of contact between Neanderthals and modern humans,” says Reed.

And not just Neanderthals. Close encounters with apes have also been inferred, based on another kink in louse-human coevolution. Those crabby pubic lice, P. pubis, look nothing like human head or clothing lice — physically or genetically. In fact, their closest relatives are gorilla lice, with shared ancestors 3 million to 4 million years ago. That’s when the parasites crawled from ancient gorilla to hominin, according to researchers. Why such close proximity? Interspecies sex is unlikely, but it’s possible our ancestors were scavenging ape carcasses for food.

That finding might set a deadline for when hominins lost their fur. To be colonized by pubic lice, our ancestors probably needed a distinct tuft of pubic hair, separated by a desert of skin from lice atop their heads.

Similarly, clothing lice must have taken up residence after our ancestors began wearing clothing — a crucial adaptation as our species inhabited colder climates. Likely made of perishable hides and fibers, the earliest garments have not survived. But their existence is attested to by the divergence of clothing lice and head lice, estimated to be between 83,000 and 170,000 years ago by a 2011 Molecular Biology and Evolution study.

More louse discoveries will surely come, thanks to improved technology. Getting louse DNA was once arduous because they’re tiny — about as big as a sesame seed — and tough, with exoskeletons “like little tanks,” says Reed. Studies relied on short stretches of genetic code or a lot of crushed critters: Scientists combined DNA from nearly 100 nymphs, or immature lice, to assemble the first complete louse genome in 2010. Today they can extract a full genome from a single louse with ease.

Meanwhile, other researchers are probing different parasites. “There are a lot of cool stories that have come out of research on lice,” says Michelle Trautwein, an entomologist at the California Academy of Sciences. “I think face mites have even more potential.”

One-tenth the size of lice, face mites are translucent blobs sprouting eight stumpy legs. You almost certainly have had them since infancy — but wouldn’t know it. The mites are too small to see, and spend most of their weeks-long lifespan snuggled into pores of your face, subsisting on skin oil. They only squirm up to the skin surface for mating, while you’re asleep. Scrubbing won’t eliminate them, but don’t fret: Face mites are generally harmless, except for individuals with compromised immune systems such as AIDS or chemotherapy patients.

In a 2015 Proceedings of the National Academy of Sciences paper, Trautwein and colleagues tested just how well face mites track our heritage. To sample the critters for genetic analysis, the scientists scraped bobby pins across the foreheads of 70 people with known, diverse ancestries. The results: The evolutionary trees of face mites and humans were matches — even more so than lice and humans.

Trautwein is now working to reconstruct unknown aspects of our past, like migrations, from our mites. Because insects evolve faster than people, they may provide finer details than our own DNA. So far, her team has sampled mites off the faces of about 2,000 people from more than 90 countries.

Genes for the Job

Another group, led by George Perry of Pennsylvania State University, is trying to identify genetic adaptations that enable certain insects to parasitize humans, including a bedbugs project developed by graduate student Diego Hernandez.

Human ancestors contracted at least three species of bedbugs from bats and birds over the ages. It’s possible that bat-human transfer first happened when hominins began inhabiting caves, but that timeframe is not yet known. Hernandez will try to narrow in on a precise date, and clarify which hominins made homes in caves, by identifying genetic changes that may have allowed bedbugs to make the leap to a new species.

“They’re not just pests,” says Hernandez. “We can actually learn a lot about ourselves from these things … even if they’re nasty.”

And there’s plenty of work to do. Says Perry, “There’s a whole, huge world of potential studies of parasites that can inform us about different aspects of human biology and evolution.” How big a world? More than 430 species of insects and other parasites live on, in and off of people.

Beyond revealing human milestones — the origins of clothing, cave shelters and more — this research may identify new ways to treat and prevent parasites. By understanding their adaptations and evolution, we’re better positioned to end the hitchhikers’ free ride.

Bridget Alex is a science writer and anthropologist living in Pasadena, California. This story originally appeared in print as "Stuck on You."