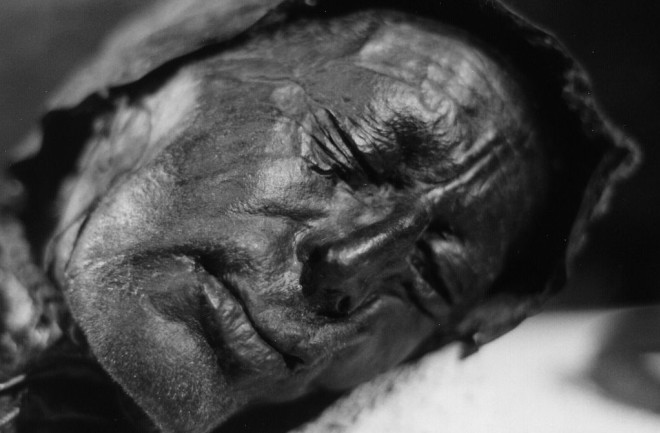 In 2003, a team of workers was operating a harvesting machine that chewed through the Irish moors to extract peat, the dense, earthy material left behind in bogs as plants decay. That day, along with the heavy peat they were gathering, the team found something else tangled in the moor’s churned soil. A corpse lay before them, cut in half by the machine’s workings but recognizably human, with face and hair intact.

It was far from the first body recovered from the bogs. The peat bogs of Ireland, Denmark, the U.K. and other European countries have yielded human remains for well over a century. These bog bodies, some thousands of years old, have been naturally preserved by the unique conditions of the bogs, which preserve skin and internal organs. Some have even been intact enough to have their fingerprints taken.

Researchers have suggested a range of explanations for why the ancient bodies were left to sink into the peat bogs. Some may have been purposely buried, or perhaps drowned. Others appear to be human sacrifices.

The body of Clonycavan man, found in a peat bog in Ireland in 2003. (Credit: Mark Healey via Wikimedia Commons)

These well-preserved corpses give archaeologists an unprecedented glimpse into ancient societies. Clues from clothing items, internal organs and even grievous injuries they sustained offer insights into the practices of cultural groups that left no written records behind. Their story, instead, is written into the bodies of those buried under layers of cold water and decaying plant matter.

Bodies From the Bogs

The bog bodies look like mummies, but, scientifically speaking, they’ve actually been tanned. Their shriveled, darkened skin is the result of a compound called sphagnan created as peat moss — which makes up most of the plant matter in peat bogs — decays. The chemical reacts with the collagen in human bodies to preserve the structure of soft tissues, while also acting as an antimicrobial agent. Bones, however, usually dissolve due to the acidity of peat bogs.

Peat bogs are composed of a top level of living plants and older layers of dead, decaying moss underneath. Bodies deposited in the bogs sink into this underworld, where chemicals like sphagnan work to preserve them for posterity.

The peat bogs of northern Europe have a few other characteristics that make them ideal for body preservation. They’re generally in cold climates, where bodies decay more slowly — this allows them to be enveloped by the bog before decomposition sets in. Conditions underground are also mostly oxygen-free, which keeps out the aerobic bacteria needed to break a body down.

In all, well over a thousand bodies have been found in peat bogs, and more likely remain buried. The oldest, found in Denmark, is around 10,000 years old. But they're not all confined to the faraway past: bodies of soldiers who died in World War II have been found in Russian wetlands.

Some of the most intriguing remains, however, have come from the European Iron Age, which began around 500 B.C. A number of bodies dated to this period appear to have died violently, perhaps as sacrifices, before being buried in the peat.

Tollund Man, an astonishingly well-preserved body dating to the fourth century B.C. was found with the noose used to hang him still looped around his neck. Nearby, another specimen dubbed Elling Woman, distinguished by the three-foot-long braid of hair curled around her head, had also died by hanging. And a third century B.C. specimen known as Graubelle Man’s throat had been cut, and his facial expression, frozen in time by the peat, is one of terror and agony.

The face of Grauballe Man, a bog body found in Denmark in 1952. (Credit: Malene Thyssen via Wikimedia Commons)

What purpose these supposed sacrifices held is unclear. Some researchers have suggested that they could have been a punishment for the ruling class in times of poor harvests or plagues. Clonycavan Man, the body found in Ireland in 2003, was well-fed, and his hands showed little signs of manual labor — a sign that he was likely a member of the elite. But his elevated status did little to save him. Clonycavan Man’s remains reveal he died from a number of crushing blows with an axe or similarly heavy object to the torso.

Other bog bodies displaying signs of violence may have been criminals, and their burials served as punishment. Still others displayed physical deformities that may have marked them for sacrifice, either as figures of veneration or condemnation.

What the Peat Tells Us

In addition to the manner of their death, some bog bodies also contain valuable information about their lives and the societies they came from. Because the bogs preserve not only skin, but also internal organs and sometimes even clothes, archaeologists have a wealth of material to analyze.

The Tollund Man, for example, had eaten a meal of porridge made with linseed, barley and a few other native plants before his death. He was also suffering from an infection of intestinal whipworms. The Grauballe Man, by contrast, had likely dined on pork, as well as a barley soup.

Remains of Tollund Man, shortly after excavation in 1950. (Credit: Nationalmuseet via Wikimedia Commons)

Clothes, too, give insights into ancient cultures. Though many bodies are found naked, likely because whatever they were wearing degraded over time, items of clothing do sometimes survive. Tollund Man had a pointed cap of sheepskin and wool fastened by a hide thong. The Huldremose Woman, dated to about A.D. 30, was wearing a wool skirt and shawl, and had two lambskin capes as well as a comb made from horn.

Archaeologists can sometimes even piece together where an ancient individual traveled during their life. A technique called strontium analysis compares the ratio of different isotopes of the element in a body to the ratio found in the surrounding environment. If samples from teeth or bones differ from the local ratio, it’s a sign that person either came from somewhere else, or travelled during their lifetime. Archaeologists discovered that the Haraldskær Woman, for example, traveled from Denmark shortly before her death around the fifth century B.C. Her trip took her to present-day Germany, Austria or France, based on strontium samples taken from her teeth. Additionally, some of her clothes were made from textiles sourced from far away.

Collectively, the information bog bodies carry with them tells us that trade networks were active in Iron Age Europe, bringing in goods from far away. The people of the day had contact with other cultures, and sometimes even traveled to faraway lands themselves. They dined on a wide variety of plants, and their diet shifted to meat in the cold winter months. They were proficient in textile production, and they kept animals for food, wool and leather.

And, finally, they were sensitive to spiritual and superstitious currents. Human sacrifices left to the deep, dark bogs may have served different purposes, and meant various things to different societies. But they were united in one regard: They knew something mysterious lurked there. Today, as we continue to find the bodies of ancient and not-so-ancient humans in those cold waters, we understand the same thing.