What Tens of Thousands of Years of Human Innovation Looks Like 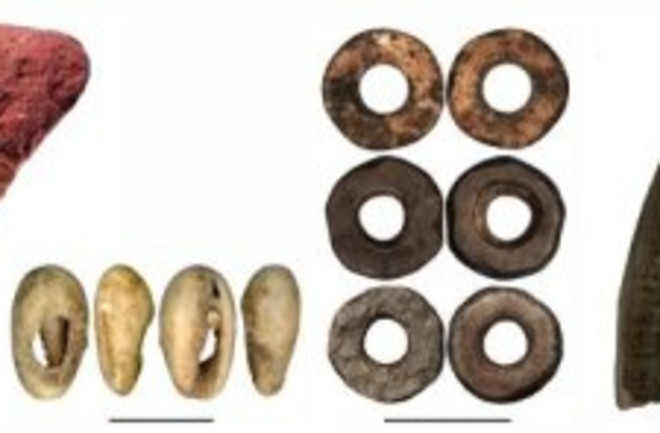 Archaeologists have excavated a cave in Kenya showing artifacts over a period of tens of thousands of years, beginning about 78,000 years ago. Some of the artifacts are, from left, red ochre; sea shell beads, ostrich eggshell beads; bone tools; and a close-up of a bone tool showing scrapes from use. (Credit: Francesco D’Errico and Africa Pitch) Excavation of an East African cave is offering clues to human culture and innovation over an expansive period starting 78,000 years ago. The artifacts suggest that tool- and bead-making technologies did not grow in large spurts, which many archaeologists theorized was the case during the later Stone Age periods. Instead, scientists have discovered incremental advances in tool creation, with old and new tools used side by side. In addition, artistic trends like beads, ochre and bone designs come and go from the archaeological record. In the Stone Age, there were no apparent “eureka!” moments, the researchers’ study suggests.

“Our evidence shows a slow and steady progression of technology and material culture, and a mix of technologies through time,” says Michael Petraglia, an archaeologist at the Max Planck Institute for the Science of Human History, and coauthor of the paper. “We could find no drama in the archaeological record [that] could support any kind of cultural revolution.” The information is presented in a paper published Wednesday, May 9, in Nature Communications. Even so, the excavation suggests something important about humans in general: the ability to adapt to changing circumstances and environments. The cave is called Panga ya Saidi, situated in a humid forest near savanna in Kenya, 9 miles west of the Indian Ocean coast. It is one of several caves in the region, many of which show signs of ancient human occupation. Panga’s interior extends horizontally about 330 feet, Petraglia says. Humans occupied the site for tens of thousands of years with few periods of abandonment. From 2010 to 2013, excavation was done in a chamber with a collapsed roof. Scientists dug down 9 feet, exposing 19 layers.

Though tools become smaller at about 67,000 years, they don’t replace the older tools. It’s as if the inhabitants use what works and innovate when necessary. The excavation includes 65,000-year-old shell beads, the oldest discovered in Kenya. Yet beads disappear for long stretches in the archaeological record. Shell beads return at 35,000 years, followed by ostrich eggshell beads at 25,000 years, followed by the return of shell beads 15,000 years later. “Things seem to be punctuated and diverse rather than the march towards progress that we often assume,” says Patrick Roberts, an archaeologist at Max Planck and co-author of the paper. None of this means that cognitive and behavioral development was stalled in humans. Rather, the authors theorize, humans were adapting to changing climate, changing culture, a growing population or a combination. They were creating and using what worked socially and for subsistence. “We are left with this brilliant patchwork of human behavior that varies across space and time,” Roberts says. “In many ways, it is this variability that defines our species rather than any particular material revolution.”