We don’t know much about how the haze that comes with wildfires impacts animals. It can be tricky or even dangerous to study, but researchers say there are opportunities to learn more. 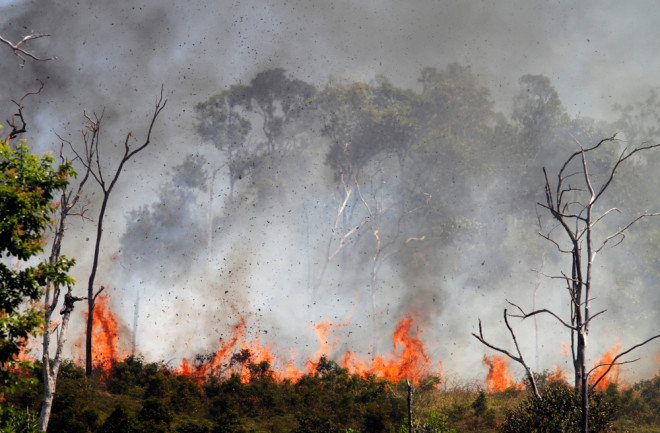 In the wake of the 2015 wildfires in Southeast Asia, researchers noticed something was off with the resident orangutans. Some of the large orange primates living near the Tuanan Orangutan Research Station, in Borneo—the Indonesian island—seemed sluggish, and low energy. Researchers at the station studied them and, it appears, wildfire smoke might be the culprit, according to a paper the team released in 2018.

While wildfires occur naturally, some believe that anthropogenic climate change will see them increase frequency and severity. The effects of wildfire smoke on human health are well documented. According to the Environmental Protection Agency, exposure to the airborne mix of chemicals and particles can cause a variety of symptoms, from burning eyes and runny nose to chronic heart and lung diseases in humans.

What’s less well-known, however, is the impact that wildfire smoke could have on wild animals. Wildfires, themselves, can see vast swaths of natural habitat destroyed. But the immediate and long-term impacts of the smoke on the denizens of the wild are not well documented. Some of this is because it’s harder or even dangerous to study wild animals, particularly in the midst of a wildfire, or when the smoke is blotting out the sun. Some researchers have investigated this matter, usually focusing on specific critters. But there’s room to learn more.

Smoke has a variety of well-known repercussions for pets, including disorientation, stumbling and inflammation of the throat and mouth. According to Jose Arce, president of the American Veterinary Medical Association, the severity and longevity of these effects will depend on the length of exposure to the smoke and the size of the animal—with smaller animals being impacted worse than their larger peers.

“We want to make sure people know that just like smoke from wildfires affects people, it can also affect pets, horses, livestock, and wildlife,” he said, adding that the AVMA recommends keeping domesticated animals indoors when it’s smoky out. However, this obviously isn’t an option for animals like cattle or orangutans.

Back in Borneo, to study the effects of smoke on orangutans, the team studied the health of four flanged males—some, but not all, adult males are flanged, possessing the characteristic facial disk—before, during and after the 2015 wildfires cast a haze over the region. For days, the team performed nest-to-nest follows, carrying GPS trackers as they followed their subjects from the time they wake up in the morning to the time they make their nests at night. This allowed them to get a sense of how far the orangutans traveled and how much they rested.

Typically, orangutans urinate in the morning after waking up, and the team was ready with a bag attached to the end of a long stick to collect the pee. They then pipetted samples of the pee onto Roche Chemstrips, and stored the rest in a thermos for later testing. The test strips allowed the researchers to see if the orangutan pee had ketones in it. Ketones are a by-product of the breakdown of fat tissue reserves, so their presence in the urine would mean the orangutans were burning more energy than they were taking in.

“The only reason why your body would need to burn fat for energy is if the amount of energy coming is less than the amount of energy that is expended during the day,” Erin Vogel, a professor at Rutgers University’s department of anthropology and one of the co-authors of the paper, said.

The team found that the orangutans rested more during and after the smoke period. They also found that the subjects travelled less, and the urine tests showed they were burning more stored fat after the smoke period. It is possible that the orangutans had less access to fruit, resulting in less energy intake. But the deficit in energy could have also come about as a product of lung inflammation, which results in more energy expenditure as the primates’ bodies try to fight off inflammation or infection.

“It’s well-known that when humans are exposed to fire, they suffer from inflammatory lung diseases, an inflammation in the lungs. And that’s costly. It takes energy for your body to mount an immune response,” Vogel said. “It could be the two things combined, or more things combined, are causing them to rely more on body fat after these fires, and during these fires.”

According to Wendy Erb, a co-author on the paper and a postdoctoral associate at the K Lisa Yang Center for Conservation Bioacoustics, it’s hard to say how long these effects stuck around within the orangutans. It would be interesting, but very complicated, to test, she said.

It’s also difficult to say how much the orangutans’ sluggishness would hinder their ability to survive. On Borneo, orangutans don’t have predators other than humans and, on Sumatra, tigers only prey on them infrequently, and rarely target adults. The haze causing them to become sluggish and reducing their travel range could mean they have less access to high-quality foods, however. It could also impede their ability to socialize if they are more sedentary, and if their vocalizations are impacted. It’s also possible that young orangutans could be hit worse than their larger, older peers. Erb also noted that the impacts of the smoke could be seen in other animals, but it’s too hard to say at the moment.

“We’re not collecting pee from all the critters in the forest,” she said.

While conducting her master's of science, Olivia Sanderfoot—currently a Ph.D. candidate at the University of Washington’s School of Environmental and Forest Sciences—dug into the literature of how air pollution, including smoke, affects birds. The resulting paper was published in 2017. In all, there are some large knowledge gaps. “We actually know very little about how birds react to wildfire smoke,” she said.

However, smoke contains a number of toxic gases and aerosols that have been studied in the context of birds. From this, researchers can make some “good guesses”—though they are still just guesses, she said. For instance, when pet birds are exposed to structural fires, they tend to exhibit forms of respiratory illness and distress. This can sometimes lead to longer-term effects, such as pneumonia. It can also cause some behavioral changes, such as reduced activity.

But it’s possible that birds are more vulnerable to some types of air pollution compared to other animals. They are incredibly good at breathing, a useful adaptation that helps them sustain flight. When it’s smoky out, though, this means they could be breathing in large volumes of wildfire components that are bad for their health, such as ozone and fine particulate matter, like PM2.5. The content of wildfire smoke depends on what’s burning, Sanderfoot noted.

“That whole thing about a canary in a coal mine is very much real. It’s based on birds’ biology,” she said.

But, even though birds are great breathers in one way, they’re ill-adapted to other aspects of the process. They can have a hard time clearing foreign matter from their airways. Their tracheas are particularly long and mucociliary transport systems don’t appear to be as good as humans’ for the sake of removing errant particles, Sanderfoot said.

‘Safety Aside, It Would Be a Logistical Nightmare’

The researchers are currently working on expanding their efforts in this area. Erb is working on a system to collect and analyse animal calls in the wake of wildfires to see if their vocal qualities change. Meanwhile, Vogel and other researchers are hoping to study the effects of 2019’s wildfires on around 100 adult orangutans in Borneo using additional methods, like biomarkers for inflammation in their urine. So far, their early results are lining up with the 2018 study, she said.

Sanderfoot is also working on an expansion of her 2017 paper, one that includes both more research papers, and a much broader range of animals. She expects it will come out in a matter of weeks. Beyond that, she is working on an analysis of bird vocalization changes in Eastern Washington State during the 2019 and 2020 wildfire seasons—this is similar to a 2017 study using acoustic recordings to measure biodiversity in the wake of the 2015 wildfires in Southeast Asia.

In this work, early data from 2019 show that the particulate matter did not have an impact. But the researcher noted that the region did not see much smoke, and the daily mean of PM2.5 rarely exceeded the natural air quality standards. In 2020, however, the region did see wildfire smoke, so she is curious to see how the results differ between the two years. Earlier this year, Sanderfoot also published a paper using bird-sighting data to determine if air pollution from wildfires decreased the probability of observing 71 common birds in Washington State between 2015 and 2019. It did in the case of some species but not others. But Sanderfoot added that just because the birds are present in a be-smoked region doesn’t mean they’re doing well.

The researcher noted that birds not appearing or vocalizing in an area experiencing smoke could mean a few different things. It’s possible the smoke could make them sick, reducing their activity and potentially causing them to sing less. The birds might also respond to the darkened skies, producing less noise. They could also just be leaving. They could also be dying. The verdict is still out.

In speaking with Discover, the researchers all expressed surprise at the relative lack of information surrounding the effects on wildfire smoke on the health of wild animals. But, in other ways, the matter is not all that surprising. For one, it’s hard to monitor individual animals over a series of decades to get a sense of the long-term health impacts of smoke. More than that, however, Erb said that some of it undoubtedly comes from the fact that collecting data during these extreme events can be hazardous. “There is good reason to leave the area when there are these kinds of events happening,” she said.

It’s also incredibly difficult to predict when a wildfire will occur, making it harder to check the animals pre- and post-smoke. Moreover, birds—most of them—can fly while humans are pretty much stuck with walking. “Safety aside, it would be a logistical nightmare,” Sanderfoot said.

However, the researcher noted that there are some opportunities for the field in the future. With long-term monitoring programs, ongoing field work, and stores of community data around the world, there could be developments down the road. Further, places like zoos, aquariums, and aviaries—in which the animals are exposed to the outdoors and, thus, wildfire smoke when it comes—could also be interesting sources of data for the sake of long-term studies.

“It just continues to floor me that we know so little about something that seems so obvious,” Sanderfoot said.