What makes swordfish the fastest swimmers on Earth? It's all about the lube! 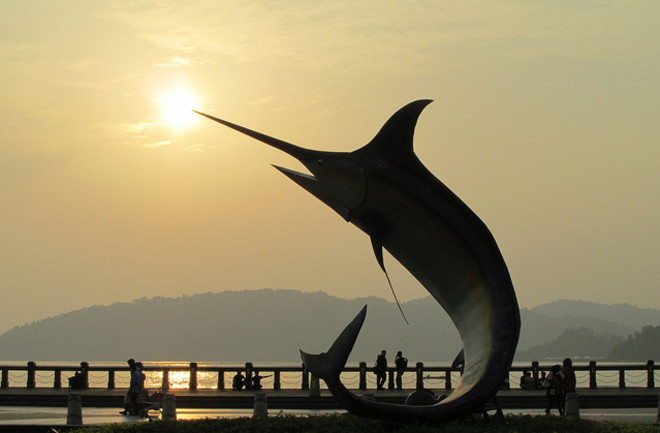 Photo: flickr/garycycles8Swordfish are among the fastest swimmers on Earth, reportedly reaching speeds of up to 60 mph. Their "sword" appendage helps them slice through the water, but they still have to deal with friction and drag from their less-pointy head. According to this study, the fish counter this friction through a clever mechanism: lube! These scientists discovered an oil-producing gland on the swordfish head that helps to lubricate the skin and reduce drag, increasing swimming efficiency. How slick is that?!Lubricating the swordfish head. "The swordfish is reputedly the fastest swimmer on Earth. The concave head and iconic sword are unique characteristics, but how they contribute to its speed is still unknown. Recent computed tomography scans revealed a poorly mineralised area near the base of the rostrum. Here we report, using magnetic resonance imaging and electron microscopy scanning, the discovery of a complex organ consisting of an oil-producing gland connected to capillaries that communicate with oil-excreting pores in the skin of the head. The capillary vessels transport oil to abundant tiny circular pores that are surrounded by denticles. The oil is distributed from the pores over the front part of the head. The oil inside the gland is identical to that found on the skin and is a mixture of methyl esters. We hypothesize that the oil layer, in combination with the denticles, creates a super-hydrophobic layer that reduces streamwise friction drag and increases swimming efficiency." Related content: All puffed out: do pufferfish hold their breath while inflated?Archerfish use precision water jets to shoot down their prey.Electric eels jump out of the water to intensify their shock power.