What Makes A Tree A Tree? 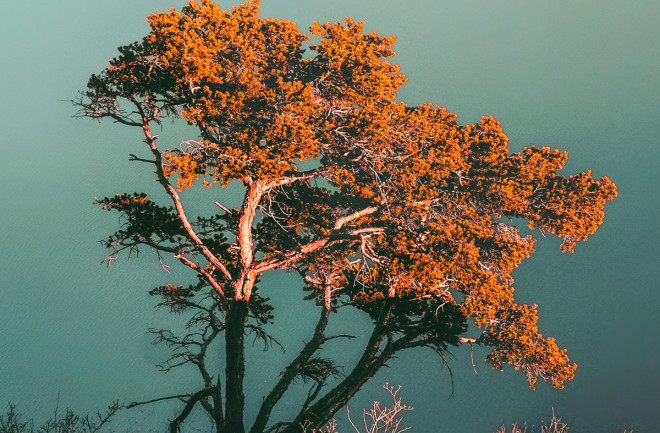 Several years ago, after Thanksgiving dinner at my parents’ house in Vermont, lightning struck a backyard maple tree. There was a ferocious crack and the darkness outside the kitchen windows briefly turned day-bright. It wasn’t until spring that we knew for certain the tree was dead.

This maple was a youngster, its trunk the diameter of a salad plate. Were its life not cut short by catastrophe, the tree might have lived 300 years. But death by disaster is surprisingly common in trees. Sometimes it results from a tragic human blunder, as with the 3,500-year-old Florida bald cypress that was killed in 2012 by an intentionally lit fire. More often, calamity strikes via extreme weather — drought, wind, fire or ice. Of course, trees also are susceptible to pests and disease; adversaries like wood-decaying fungi can significantly shorten a tree’s life. But the ones that manage to evade such foes can live for an incredibly long time.

If one is pressed to describe what makes a tree a tree, long life is right up there with wood and height. While many plants have a predictably limited life span (what scientists call “programmed senescence”), trees don’t, and many persist for centuries. In fact, that trait — indefinite growth — could be science’s tidiest demarcation of treeness, even more than woodiness. Yet it’s only helpful to a point. We think we know what trees are, but they slip through the fingers when we try to define them.

Trees don’t cluster into one clear group: They emerge in multiple lineages and have adopted multiple strategies to become what they are. Take longevity. A classic example of the Methuselah-ness of trees is the current record-holder, a 5,067-year-old great bristlecone pine that grows high in the White Mountains of California. (That tree was almost 500 years old when the first pyramids were built in Egypt.) Scientists speculate that the hardy bristlecones owe their endurance largely to location: They avoid fires that sweep through lower elevations and pests that can’t stomach the harsh terrain of the subalpine zone. The giant sequoias, a short way down the mountains from the bristlecones, take an entirely different longevity tack. These beasts — their trunks can be more than 30 feet across — live thousands of years, fighting fire and pestilence with thick, resistant bark and plentiful in-house repellent compounds.

Bristlecone pines are among the longest-living trees. (Credit: Thomas Ramsauer/Shutterstock)

Bristlecone pines are among the longest-living trees. (Credit: Thomas Ramsauer/Shutterstock)

Some 400 miles to the east, a spindly wisp of a tree has both the bristlecones and the sequoias beat when it comes to lifespan — through another strategy altogether. The quaking aspen (Populus tremuloides) — a tree you can wrap your arms around that rarely grows taller than 50 feet — excels at sending up new shoots from its base. This results in giant stands of “trees” that are, in fact, one genetic individual connected beneath the ground. A Utah colony of quaking aspen is estimated to be 80,000 years old. Neanderthals were around back then.

Once you add clones to the mix, trees quickly lose their claim on old age. King’s holly (Lomatia tasmanica) is a shiny green shrub native to Tasmania (shrubs, technically speaking, aren’t trees because they don’t have a central, dominant stem). There is only one population of king’s holly in the world, and scientists think it’s entirely clonal: Although it does occasionally flower, its fruit has never been seen. Recent radiocarbon dating suggests that it (they?) is at least 43,000 years old. Up there too is a scrubby ring of creosote bush out in the Mojave Desert of California, called “King Clone,” with an estimated age of 11,700 years. Longevity is wholly unsatisfying in a search for a unified “treeness of trees,” as forester Ronald Lanner terms it in a 2002 essay in Ageing Research Reviews.

Geneticist Andrew Groover of the US Forest Service Pacific Southwest Research Station in Davis, California, also spends a lot of time thinking about trees. He is quick to acknowledge that defining them is problematic. “Visit your favorite plant nursery and you will find plants categorized by their appearance and function, including a group categorized as ‘trees’,” he writes in a 2005 paper in Trends in Plant Science, “What genes make a tree a tree?” “This categorization is intuitive and practical but contrived.”

Groover points to wood, surely a defining feature of trees, as a case in point. “True” trees (we’ll get to that later) make wood through what scientists call secondary growth; this allows trees to grow out (thicken), in addition to growing up. Secondary growth emerges from a ring of specialized cells that encircle the stem. Called the vascular cambium, these cells divide in two directions: toward the outside of the tree, yielding bark, and toward the center of the tree, yielding wood. Year after year, this wood is deposited in new inner rings of growth that are doped with cellulose and the long, rigid polymer called lignin. After this cellular stiffening, the wood cells are killed and dismantled, for the most part, until nothing but their rigid walls remain.

In plants that exist today, secondary growth probably had a single evolutionary origin, although the now-diminutive club mosses and horsetails invented their own version some 300 million years ago, enabling the extinct Lepidodendron, for example, to grow more than 100 feet tall. But secondary growth doesn’t automatically lead to treeness: Despite that single origin, woodiness pops up scattershot across the plant family tree. Some groups of plants have lost the ability to form wood; woodiness has reappeared in lineages where it had vanished. It seems to evolve fairly quickly after plants colonize islands. Hawaii, for example, has woody violets, and the Canary Islands have dandelion trees.

Molecular biology offers some insights into why the ability to make wood is maintained and reappears so often in plant evolution. Genes that are involved in regulating the growing shoot — the upward, “primary” growth of trees and non-trees alike — are also active during the secondary growth that yields wood. This suggests that these already-existing and essential shoot-growth genes were co-opted during the evolution of woodiness. And it might explain why the ability to become woody is maintained in non-woody plants and why it’s relatively easy, from an evolutionary standpoint, to dial woodiness back up.

That said, you don’t need wood to be a tree. Monocots, an enormous group of plants that lost the ability to undergo secondary growth, have several arborescent members that aren’t “true” trees but sure look like them. Bananas grow tall with what appears to be a trunk but is really a “pseudostem” mass of tightly packed, overlapping leaf bases or sheaths. The true stem of a banana plant emerges only when it’s time to flower, pushing itself up and out through the leaf sheaths. Yet banana trees can be more than 10 feet tall. The family of palms, also monocots, grow tall by extending their initial, fat shoot topped by an enormous bud (note that palm stems don’t widen as they grow tall).

Given all this, perhaps it’s not surprising that a recent analysis of tree genomes tells us little about the defining features of trees. Geneticist David Neale of UC Davis and colleagues pored over results from the 41 genomes (including grape) that have been sequenced, beginning with black cottonwood in 2006. Their analysis, published last year in the Annual Review of Plant Biology, did find that trees making edible fruits often have an outsized number of genes devoted to making and transporting sugars, compared with non-edible-fruit trees. Then again, so do grapes and tomatoes. Several trees, including spruce, apple and some eucalyptus, have expanded genetic toolkits for dealing with environmental stresses such as drought or cold. But so do many herbaceous plants, including spinach and Arabidopsis, that weedy little lab rat of the plant world that is about as un-treelike as you can get.

So far, there is no standout gene or set of genes that confers treeness, nor any particular genome feature. Complexity? Nope: Full-on, whole-genome duplication (an often-used proxy for complexity) is prevalent throughout the plant kingdom. Genome size? Nope: Both the largest and smallest plant genomes belong to herbaceous species (Paris japonica and Genlisea tuberosa, respectively — the former a showy little white-flowered herb, the latter a tiny, carnivorous thing that traps and eats protozoans).

A chat with Neale confirms that tree-ness is probably more about what genes are turned on than what genes are present. “From the perspective of the genome, they basically have all the same stuff as herbaceous plants,” he says. “Trees are big, they’re woody, they can get water from the ground to up high. But there does not seem to be some profound unique biology that distinguishes a tree from a herbaceous plant.”

Notwithstanding the difficulty in defining them, being a tree has undeniable advantages — it allows plants to exploit the upper reaches where they can soak up sunlight and disperse pollen and seeds with less interference than their ground-dwelling kin. So maybe it’s time to start thinking of tree as a verb, rather than a noun — tree-ing, or tree-ifying. It’s a strategy, a way of being, like swimming or flying, even though to our eyes it’s happening in very slow motion. Tree-ing with no finish in sight — until an ax, or a pest, or a bolt of Thanksgiving lightning strikes it down.

Knowable Magazine is an independent journalistic endeavor from Annual Reviews.