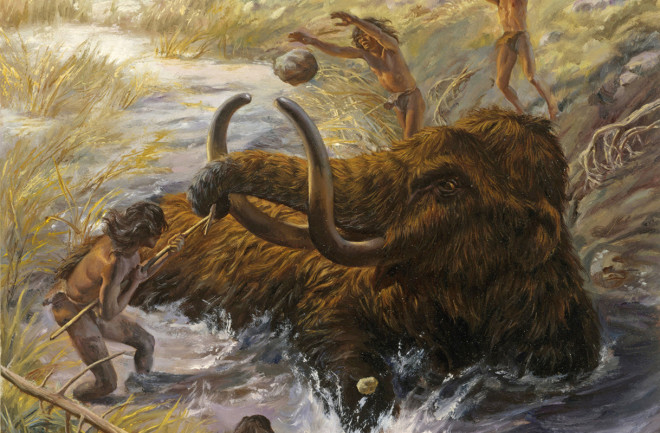 Maybe humans aren’t to blame for the mammoth’s extinction after all. | Peter V. Bianchi/National Geographic/Getty Images

The disappearance of mammoths and giant sloths has defied explanation since the turn of the 19th century, when Thomas Jefferson sent Lewis and Clark on an expedition to, among other things, find the lost megafauna in the heart of America. Many researchers have blamed the extinction of most large mammals on the hunting excesses of nomadic humans. But could a changing climate be the culprit? In Science Smackdown, we let experts argue both sides.

Hunt-crazy humans weren’t the main cause, says geneticist Alan Cooper of the University of Adelaide in Australia. Severe climate change throughout the Late Pleistocene, going back at least 125,000 years, was “perfectly capable of causing major problems,” he says. “Some extinctions occurred before humans even showed up.”

In a paper in Science last summer, Cooper and colleagues show a strong statistical correlation between megafaunal extinctions and sudden warming events called interstadials. “The interstadials were the single biggest magnitude change in climate to have occurred in the past 2 million years,” Cooper says. Temperatures could rise as much as 10 degrees Celsius over just a few decades. “That’s going to cause a massive disruption to weather patterns and also vegetation. Just look at the smaller-scale changes we’re making to the climate now and the concomitant storms, droughts and fires.”

“Some 50 genera vanished in South America between about 13,000 and 11,000 years ago,” he says. “Very few, if any, extinctions occurred in Africa during the same interval, although there must have been analogous climate shifts.” Fiedel says that’s a big problem for Cooper, and good evidence for the so-called overkill hypothesis. “African animals were adapted to human predation pressure after 2 million years of hunting, but South American mammals had no previous experience of human hunting,” Fiedel explains.

Even in North America, Fiedel says, Cooper’s paper “obscures the extraordinary temporal clustering of extinctions — at least 17 genera, and probably 35 — at the time of human arrival.”