What It Takes To Rule The (Marine) World 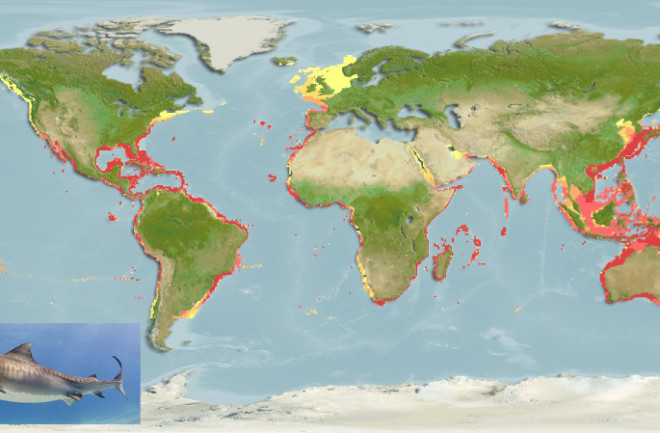 The dreaded tiger shark (Galeocerdo cuvier) is among a tiny minority of fish species (<1%!) whose distributions span oceans, according to a new paper. Range map from FishBase, picture of shark by Albert Kok. Fifty-five years ago, Jack Briggs determined there were 107 fish species with a trait most fish cannot boast: a global distribution. These circumtropical species can be found in all tropical oceans, having found their way around the land masses which split the seas (at least often enough to persist as a single species). Now, in a publication for the journal Fish and Fisheries, Briggs has teamed up with Michelle Gaither, a postdoctoral research associate at Durham University, UK, and colleagues from the University of Hawaii and the California Academy of Sciences to update the half-century-old list. Of the over 20,000 marine fish species, a mere 284 span the seas to maintain a global distribution. The team was able to re-evaluate Briggs' original list thanks to breakthroughs in DNA sequencing that have occurred over the past 50 years. By looking at genetic sequences rather than just morphological differences, scientists are able to not only separate similar looking species, they are able to determine whether a single species is split into distinct populations or whether individuals are able to travel vast distances to keep disparate areas connected. Thanks to genetic data, nineteen of the original 107 have since been shown to be complexes of multiple species or not to make it around the globe, while 196 new species have joined the 1% club.

A school of myctophids (lanternfish). A whopping 47 of these species are considered circumtropical! Photo credit: OAR/National Undersea Research Program Fish families with the greatest number of circumtropical species include the requiem sharks (Carcharhinidae), tunas (Scombridae), jacks (Carangidae), remoras (Echeneidae) and lanternfishes (Myctophidae). There are many old fish lineages, including elasmobranchs (sharks and rays), but there are also evolutionary newcomers like the ocean sunfish (Mola mola). These global travelers tend to live in the open ocean, and a majority of them exist in the dark depths of the seas, more than 200 meters below the waves, including the 47 circumtroptical lanternfishes (or myctophids). Lanternfishes are some of the most abundant deep sea fish; some estimate that they comprise as much as 65% of the biomass of all deep sea fish (an estimated global biomass of more than 550 million metric tonnes!), and they are an important part of the food chain, living in what scientists call the "deep scattering layer" — a moving band of small species that is the target of many diving and deep dwelling predators, from squid to penguins. For most marine species, long distance movement occurs in the earliest stages of life. Fish, in particular, transit between places when they are small larvae carried about by ocean currents. Some species' young float for months, allowing them to be swept to far off places before they settle down and mature into full grown fish. But the 1%-ers defy fish convention. While many do spend quite a while as larvae, they aren't exceptional in this regard. In fact, none of the species with the longest pelagic larval durations — the eels in the order Anguilliformes — are circumtropical. Instead, only species whose adult forms can migrate great distances are found across oceans. But a global distribution seems to come with an evolutionary cost: reduced speciation rates. Eighty-three families had species which span oceans, but many are the only species in their genus or family, indicating old lineages which never diverged. "We dub this lack of divergence the lonely genus hypothesis, which maintains that opportunities for speciation are fewer in circumtropical fishes," write the authors. Indeed, the fish families with most species are sorely underrepresented. None of the over 1100 gobies (family Gobiidae), for example, are circumtropical. Yet the only species in the genus Mola — the bizarre ocean sunfish — spans oceans. https://www.youtube.com/watch?v=U60obmWODLQ While this updated list demonstrates how much we have learned about marine fishes in the past half century, there's still a lot of information missing. The team cautioned that 35 of the 284 are unlikely to be truly globally distributed — there just isn't enough data to be sure. Almost 1/5 of the circumtropical species had no public genetic data available, while another 58% had so little data that the team couldn't use what exists to evaluate global connectivity. Thus, nearly three-quarters of circumtropical taxa have not been adequately assessed using genetic tools, according to the authors. Certain groups were particularly data poor, such as the lanternfishes, of which 85% of the 47 species had fewer than 10 sequences. Such genetic evaluations are especially important for the species that are popular food options, like the tunas, or are often caught as bycatch in other fisheries (including many of the sharks). When fish migrate across oceans, they traverse waters owned by different countries, and therefore may be subject to different rules and regulations in different parts of their range. A species might be protected in one area yet targeted freely in another, making them vulnerable to exploitation and overfishing. Nations therefore need to come together to appropriately manage these world travelers. The researchers also note that woefully little information is available about non-fish species that might similarly span the world's oceans. "While our focus is on fishes, it is worth noting that little work has been carried out to assess globally distributed invertebrates," the authors write in their conclusions. Still, they hope that their list forms a useful baseline for future study. "It is a roadmap (we hope) for further explorations into the fishes with the broadest possible distribution." Citation: Gaither, M. R., Bowen, B. W., Rocha, L. A. and Briggs, J. C. (2015). Fishes that rule the world: circumtropical distributions revisited. Fish and Fisheries. doi: 10.1111/faf.12136