What Is Citizen Science Good For? Birds, Butterflies, Big Data 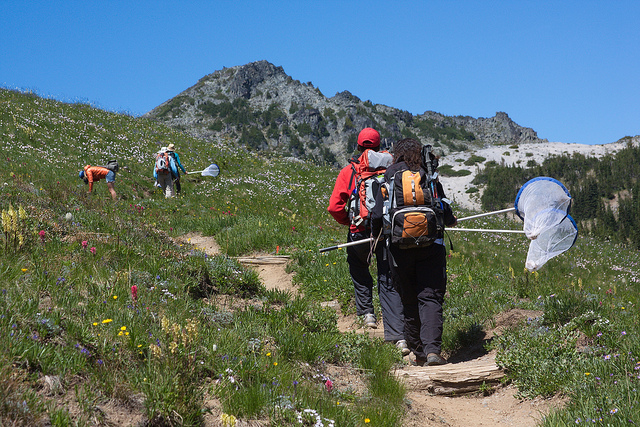 No matter how unhip you feel wearing waders or hauling a butterfly net, citizen science is cool. That's obvious from the boom in online projects that let you count penguins, hunt planets, or identify animals in the Serengeti, as well as the scientific papers using these data. Now researchers in Sweden have looked into the science of citizen science itself. How much of this volunteer research is really happening, they asked—and what is it producing? Christopher Kullenberg and Dick Kasperowski, at Sweden's University of Gothenburg, started their investigation by digging through scientific citations to find citizen science projects. They used an index called Web of Science. They were looking for any projects in which volunteers collected or classified data for scientists to analyze. But people don't always call this "citizen science." It might show up as "civic science," "crowd science," "street science," "DIY science," or even "community-based auditing." Using these search terms, the researchers found more than 1,900 published papers involving citizen science. From the collection they gathered, they were able to analyze what's been happening with citizen science overall. For one thing, they saw, the boom is real. Citizen science was barely mentioned in the mid 1990s, but it started to increase slowly at the turn of the millennium. Around 2010, the authors saw a steep increase in published articles mentioning citizen science. In 2015 there were more than 400 such articles. Kullenberg and Kasperowski think the boost around 2010 is related to several online platforms for citizen science that showed up at that time, including Galaxy Zoo, eBird, and Foldit. Next, Kullenberg and Kasperowski looked at the keywords that scientists had attached to these articles. They used the keywords to build a map of relationships between the articles, and found that the papers fell into three main clusters. The largest group included research on conservation, biodiversity, and climate change. Migrating birds and butterflies were especially popular subjects. A second, smaller cluster of papers involved people sharing geographic information. And a third group was made up of social science papers about the phenomenon of citizen science itself. Separately, Kullenberg and Kasperowski searched Web of Science for review papers that included lists of citizen science projects. This let them find projects that hadn't necessarily produced any published articles. And these were plentiful: out of 490 citizen science projects they found, just 78 have resulted in publications so far. (The most productive area, once again, was bird research.) Some citizen science projects, the authors note, aren't aiming to produce papers. They might be gathering data to monitor a species or a habitat, for example, without the goal of publishing their results. Conversely, there are published papers that use citizen science to get their data but don't mention it—Kullenberg and Kasperowski wouldn't have found these papers in their search. And although citizen science is increasing in visibility, not all of it is new. The National Audubon Society's Christmas Bird Count, for example, began all the way back in 1900. The Audubon Society didn't attach the name "citizen science" to it until the 1990s, the authors say. Still, citizen science is clearly gaining popularity. And it's practical. In all those bird and butterfly studies—and other biological research projects—citizen scientists can help cheaply collect large numbers of observations over time, and across wide geographical areas. Citizen scientists have also proven useful for classifying giant sets of images, even if they don't depict flying animals; the citizen science platform The Zooniverse hosts plenty of astronomical and historical projects, for example. Kullenberg and Kasperowski predict that soon, citizen science will catch on in other fields too. New digital technologies will make it easier for researchers to share big datasets with volunteers. Then the bird people will be able to brag that they started the trend.