What do giant squid look at with their basketball-sized eyes? 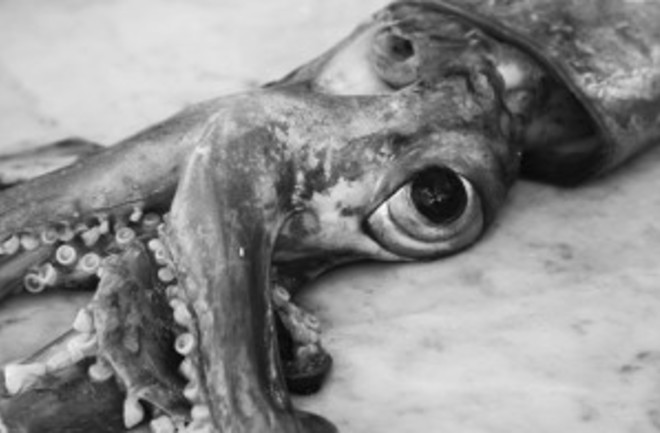 Giant squid have truly giant eyes, in fact they have the largest eyes of any animal. Whether or not their eyes are larger than you might expect for their size is still debated, but nonetheless, they are truly enormous; according to this paper they are three times the size of any other known animal: "In a search for more reliable data on the eye size of the largest deep-sea squid, we were fortunate to obtain a photograph of a freshly caught giant squid (Architeuthis sp.), where the pupil diameter could be reliably determined to be 90 mm [3.5 inches], with the entire eyeball being at least 270 mm [10 inches]. We also had access to an adult colossal squid (Mesonychoteuthis hamiltoni) from New Zealand and determined its eye diameter to be between 270 and 280 mm." So, why do these deep-sea squid have such giant eyes? Well, if you have read Moby Dick, you might remember that sperm whales feed on giant squid. These researchers propose that the giant squid use their giant eyes to spot sperm whales deep in the sea, where light is a very limited resource, and seeing anything, even a very large whale, is no easy feat.

A unique advantage for giant eyes in giant squid. "Giant and colossal deep-sea squid (Architeuthis and Mesonychoteuthis) have the largest eyes in the animal kingdom, but there is no explanation for why they would need eyes that are nearly three times the diameter of those of any other extant animal. Here we develop a theory for visual detection in pelagic habitats, which predicts that such giant eyes are unlikely to evolve for detecting mates or prey at long distance but are instead uniquely suited for detecting very large predators, such as sperm whales. We also provide photographic documentation of an eyeball of about 27 cm with a 9 cm pupil in a giant squid, and we predict that, below 600 m depth, it would allow detection of sperm whales at distances exceeding 120 m. With this long range of vision, giant squid get an early warning of approaching sperm whales. Because the sonar range of sperm whales exceeds 120 m, we hypothesize that a well-prepared and powerful evasive response to hunting sperm whales may have driven the evolution of huge dimensions in both eyes and bodies of giant and colossal squid. Our theory also provides insights into the vision of Mesozoic ichthyosaurs with unusually large eyes." Related content: NCBI ROFL: You know what they say about barnacles with long legs… NCBI ROFL: Whale ménage à trois: now with 1,000-kg testes! NCBI ROFL: Note to self: keep "squashed spider contents" out of eyes.