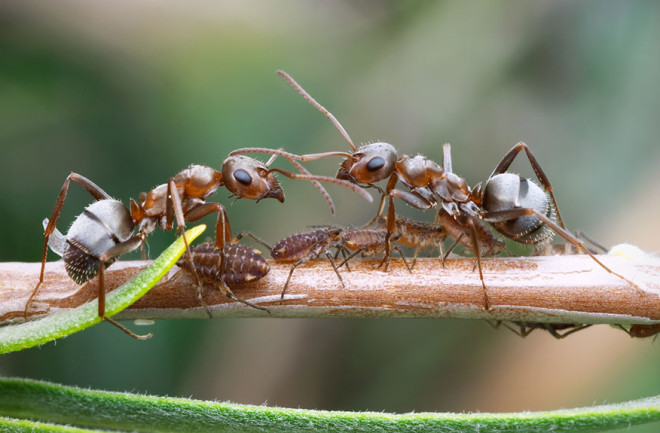 They clean themselves before entering their home. They use special chemicals to disinfect. They restrict access to high-traffic areas. And no, they’re not human — they’re ants. Long before social distancing became a household term for us, ants were practicing a version of it to ward off diseases in the nest. And they’re good at it.

Ants are effective at preventing epidemics within their colonies, despite their close living quarters and massive communities. In fact, epidemics and sick colonies are rarely, if ever, found in the wild. Thanks in part to this, ants are one of the most successful species on Earth. According to some estimates, they make up almost a quarter of all terrestrial animal biomass. And because of the social measures they’ve evolved to use, ant behavior often seems distinctly intelligent — but it’s really not.

“You can learn some things from animals, even though it's very different for humans,” says Nathalie Stroeymeyt, a researcher who studies ants at the University of Bristol. “There's some general principles that are effective, which have been selected for, that you can sort of take inspiration from.” Human communities warding off this generation’s biggest pandemic to date: take note.

Observed in many species of ants, these disease-curbing social practices include separating groups by role within their nest, sanitizing themselves and their living quarters and mixing tree resin with their own poison to kill pathogenic spores.

Ants may have a few things to teach humans about giving each other enough space —especially during a pandemic. A 2018 study, published in Science and led by Stroeymeyt, found that when colonies of garden ants were exposed to a pathogen, they changed their behavior in response. The ants were already divided into two groups: Workers that take care of the brood inside the nest, and those that forage outside. After researchers exposed ants in 11 colonies to infectious spores, the ants in each colony began to interact less with ants from the other groups and more with one another.

The groups effectively became more separate, which prevented the spread of the spores. What’s more, after researchers performed a separate experiment with 11 more colonies, the ants protected what the study calls 'high-value' individuals: the queen and younger worker ants, who always survived and had less exposure to the spores. And the more numerous ants that had low levels of exposure to the spores showed a heightened immune response to the infection, much like humans do with a vaccine.

We can learn more from ants than just their socially-distant ways. A study published in the Journal of Evolutionary Biology described how ants use their own versions of cleaning and sanitizing one another. Another study, published in 2018 by researchers at the Institute of Science and Technology Austria (IST Austria), built upon this and found that they adjusted sanitary care based on their nest-mate’s level of infection.

Not only do nest-mates groom themselves before entering the nest, but they also groom each other, a practice known as 'allogrooming': physically plucking potentially infectious particles from their mate’s bodies. When grooming a nest-mate that was exposed to more than one pathogen, the ants adjusted their grooming technique, increasing the use of their own antimicrobial poison and reducing physical contact. Again, ants left with low levels of spores on their bodies actually developed higher immunity to the fungal spores in another version of ant inoculation against disease.

Ants also use chemicals to prevent entry of a pathogen before the nest has even been established. Many ant species produce a poisonous substance within their venom gland called formic acid. They usually use it alone to fight off predators or disinfect their nest. Much like humans like moving into a clean apartment, ants use this poisonous formic acid to sanitize a new living area before they move in.

In a separate study, researchers at IST Austria found that invasive garden ants sprayed their living quarters with formic acid, and that cocoons containing pupae placed in the nest were resistant to this usually poisonous substance. “When we use harmful cleaning products, we protect ourselves with gloves," said Sylvia Cremer, who worked on the study, in a press release. "The cocoon has a similar function to protective gloves.”

In addition to grooming themselves and each other, ants have even more strategies to fight disease. Wood ants use the same formic acid that the garden ants use to clean their nests and battle their prey. They also collect tree resin from outside the nest, which has antimicrobial properties, and place it near the brood. But rather than using each substance alone, a study led by Michel Chapuisat, a researcher at the University of Lausanne in Switzerland, suggests that they mix the two within their nests to create an even more powerful anti-fungal agent.

His group placed nest materials like twigs, rocks, and resin near worker ants, and kept another set of materials away as a control. They found the formic acid present on the resin that was kept near the ants. Beyond that, the resin that the worker ants had come into contact with had higher anti-fungal properties than the resin they stayed away from. Other nest materials exposed to the acid did not have this antiseptic property.

“There were probably some genes involved in the tendency to collect resin and these were selected by evolution. No ant has thought, ‘How can I kill disease?’" says Chapuisat. “But what we can learn are general principles.” Just like ants, some of our most powerful tools against the spread of disease are indeed substances found in nature.

With ants as a guide, scientists can evaluate the efficacy of strategies like social distancing, sanitizing and even using compounds from nature. New research from Stroeymeyt will even use ants as a model for so-called 'super-spreaders' by observing the insects and selecting those that have the most contact with others. This type of model might be used in the future to help identify potential super-spreaders in a community and vaccinate or immunize them first.

Some tactics from ants, of course, won’t work for us, like poisoning their young when they’re infected and kicking them out of the nest. But the point is not for humans to emulate ants, but to do what humans do best: Pick and apply the best parts of nature for our own use.