When it comes to making apples, it turns out the relatedness of the wild bees makes all the difference. 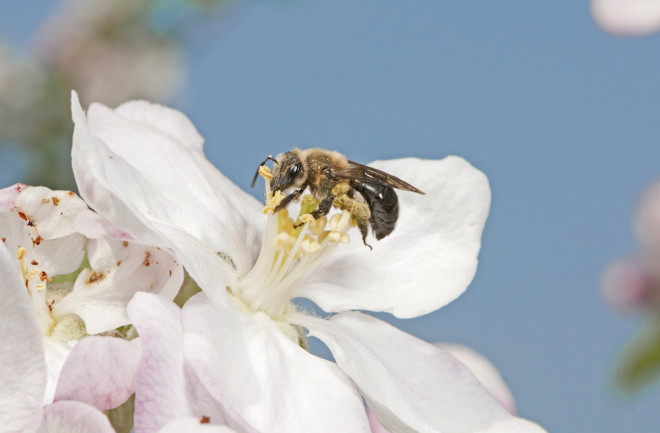 Stroll through an apple orchard in bloom, and you’ll be surrounded with the buzz of busy bees. But unless the farm manager has rented hives of domesticated honeybees — which are not native to the U.S. — the bees at work will be a highly diverse crew that live in the nearby wild. Big or small, green or striped, shiny or fuzzy, bees come in all types.

While news of bee declines has almost stopped feeling like news, a group of researchers has figured out a new question to ask about these diverse wild bees that pollinate our apple crops. Are the species of bees most in decline closely related? And does it matter if they are? The answers could be a big hint for future research about the causes, consequences and solutions to the perilous state of wild bees.

The team, led by entomologists at Cornell University, studied apple orchards and their bees for ten years. Many of the orchards experienced losses of bee habitat in their surrounding landscapes in that time, and subsequently lost many of their wild bee species. But that’s not the news. When it comes to making apples, it turns out the relatedness of the wild bees makes all the difference.

Normally when ecologists talk about diversity, they’re talking about the number of species. A lot of research has shown that more diverse ecosystems are healthier. Why is that? You can think about healthy ecosystems being a lot like a healthy diet. Everyone knows that eating just donuts every day isn’t good for you. But neither is eating just blueberries. You need to eat many different foods to meet your nutritional requirements. Sure, some foods are probably better for you than others, and maybe you have certain needs or goals. But in general, a balanced diet is what gets the job done.

In the same way, a diverse ecosystem with lots of species is more likely to have all its roles filled and be functioning as it’s supposed to be. All the cogs are turning; everything is in working order.

But we can do even better. Back to our hypothetical diet, let’s say we eat blueberries and donuts (because, diversity) and we’re also going to add a few more foods. Should we add raspberries, strawberries and grapes? Or, should we branch out and add eggs, potatoes and spinach?

See what I did there? Just a little phylogeny humor for you there. That second diet has the same diversity if you just count the species, but it has more phylogenetic diversity — the species are less related. You can see how that will cover more bases, and result in better health.

That’s why the researchers asked whether looking at the phylogenetic diversity of the bees could help us better understand patterns in bee declines — and their consequences for fruit growers. For example, distantly related bees might be more likely to target different flowers, for instance pollinating only the tops of trees or only the low-hanging flowers.

“If you think about all of the bees that are present in an orchard as being different branches of the tree of life, are we pruning off those tree branches randomly (when we lose them)?” asks Heather Grab, lead researcher on the study, which came out today in Science. “Or, are some branches being pruned much more heavily than others?”

The team surveyed bees in 27 orchards in New York for over 10 years, identifying over 8,700 individual bees. We’re not talking domesticated honey bees — they found an amazing 88 different species of wild native bees.

Over those years, they watched the landscapes around the orchards become more and more cultivated. Natural spaces like woodlands were replaced by alfalfa, corn and soybeans. And they saw fewer and fewer bee species in the orchards as the habitat around them disappeared.

The researchers estimate that for every 10 percent of land area that gets converted to agriculture, 35 million years of evolutionary history are lost from the bee community.

They didn’t just track the bees over those 10 years — they also tracked the apples. They looked at metrics that would matter most to an apple farmer: number of seeds per apple, weight of individual apples and any malformation of the fruits. This all has to do with how well the flowers were pollinated.

They found that the number of bee species didn’t matter for pollination. But the phylogenetic diversity did. Their giant dataset allowed them to learn that although more agriculture in the landscape decreases both, the latter is what really hurts the fruit. Cutting away whole branches from the tree of life hurts the whole ecosystem.

These results will hopefully lead to more careful study of the complex relationships between wild bee declines, habitat losses, honey bees and fruit crops — and more emphasis on conservation and restoration of bee habitat in the landscape. Around these orchards, says Grab, the most important native bee habitat is likely woodlands. Part of that may be because today’s important apple pollinators — bees that are active early in the season, when apples are blooming — likely evolved pollinating native early blooming woodland trees like Hawthorne.

Grab talks about habitat loss as “simplification” — going from a diverse landscape with lots of different habitats, to a landscape that’s just agriculture. “We’re basically documenting here that there is a consequence to the way that we have simplified the landscape,” says Grab, “that has consequences not only for biodiversity of bees, but it also has negative effects on the very agricultural systems that are causing this simplification.”