The Russian volcano Shiveluch shares a lot of traits with Washington's Mount St. Helens, including a new whaleback dome forming in its crater. 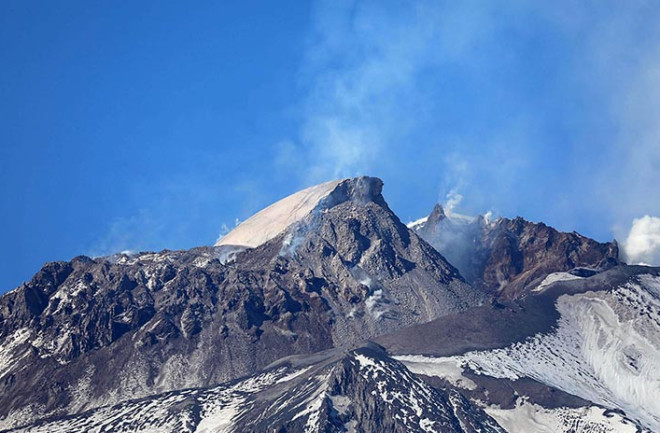 The whaleback dome on Shiveluch in Russia, seen in late September 2020. (Credit: KVERT)

Shiveluch on Russia's Kamchatka Peninsula is one of the most active volcanoes on the planet. Usually its eruptions are dramatic explosions, but over the last few weeks, it has started erupting ... a thing. It looks like an alien structure rising out of the ground, but a what we call a whaleback is a special kind of lava dome made by a volcanic eruption.

Whalebacks are the volcanic equivalent of squeezing old toothpaste out of the tube. The lava erupting is dacite, a relatively high silica magma that can be very sticky. If that dacite is especially cool after sitting and crystallizing inside the volcano, it can erupt nearly as a solid. This style of eruption produces smooth or grooved spines, or domes of lava that eventually crumble ... sometimes leading to violent eruptions (but not always).

The Mount St. Helens whaleback dome that formed in the 1980 crater during the 2004-08 eruptions. (Credit: USGS)

Back in 2004, Mount St. Helens started erupting for the first time in almost 20 years. Unlike the eruptions in the 1980s, these new eruptions were (mostly) not explosive. Instead, we got an impressive view of a whaleback dome forming, all part of the process to rebuild the part of the volcano destroyed in 1980. The dome was stable enough as it erupted that the USGS was able to put an instrument on the dome to measure how much it was moving each day!

The whaleback dome on Mount St. Helens in 2004-05. The inset shows the instrument placed on the dome itself to measure how much it was moving. (Credit: USGS)

The growth of the whaleback at Shiveluch looks to be on par with those historic whalebacks and spines. The fate of the whaleback is a crumbled mass of rock as it oversteepens during the eruption. At Mount St. Helens, that crumbling was fairly passive. However, at many volcanoes, the crumbling of a dome can lead to explosive eruptions. These dome-collapse pyroclastic flows are what destroyed St. Pierre on Martinique in the 1902 eruption that killed over 20,000 people.

Landsat 8 image of Shiveluch in Russia, showing the location of the new whaleback dome in the red square. (Credit: NASA/USGS, Erik Klemetti)

The Landsat image (above) from Sep. 25 shows the scale of the dome and the scars of eruptions over the past few years at Shiveluch. Much like Mount St. Helens, Shiveluch is missing a big piece of the volcano from a collapse and directed blast that happened in 1964. And much like Mount St. Helens, this whaleback is growing in the scar left by that violent eruption. How long this whaleback lasts is anyone's guess, but it is exciting to see how these two volcanoes across the Pacific behave in such a similar fashion.