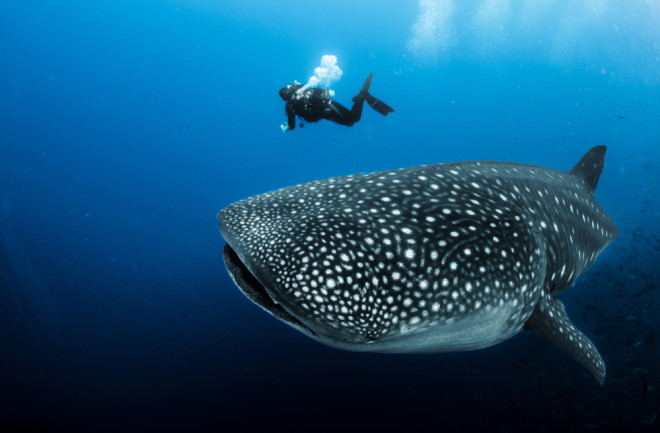 The sharks aren’t necessarily vegetarians, but they can sometimes go for weeks or month without eating, say researchers from Japan. The vegetative fare may be how the fish fill in their diets when prey is scarce.

“Whale sharks are a globally threatened but very poorly understood species,” said Alex Wyatt, a marine ecologist at the University of Tokyo in Japan, who led the new research. “Despite their massive size… we still know relatively little about them.”

A Whale of A Shark

Whale sharks are indeed massive. The polka-dotted fish can grow up to about 40 feet in length and weigh as much as 47,000 pounds, nearly as much as four African elephants, Earth’s largest land animal, combined. The sharks stick to warm, tropical waters and tend to aggregate in locations where they take can advantage of prime feeding opportunities.

Whale sharks gather in the Gulf of Mexico when fish are spawning, for example, and at Christmas Island in the Indian Ocean the sharks show up in huge numbers during the annual mass spawning of red land crabs. Beyond what they eat at these yearly feasts, though, scientists know little about whale sharks’ diets.

To illuminate the mystery, Wyatt and colleagues tracked stable forms of carbon and nitrogen in the sharks’ tissues, which allowed them to track what and when they’d eaten. The team followed two populations: one group of five captive individuals that were part of the Okinawa Churaumi Aquarium and a second group of eight wild sharks that had become entangled in fishing nets off the coast of Okinawa. The team took blood samples and other measurements of the wild whale sharks as they freed them from the nets. The analysis gave the researchers a picture of the sharks’ overall health, including what they ate and how long it’d been since their last meal.

In a surprise find, all of the wild sharks the researchers evaluated had recently eaten some sort of plant matter. What’s more, many of them had experienced a period of prolonged food scarcity in the recent past. The researchers suspect the sharks may fast during long migrations and rely on plants and algae for sustenance when other food is scarce.

“We were able to identify two feeding strategies (oceanic or coastal), evidence of prevalent starvation and the first direct evidence of herbivory by the species,” Wyatt said.

The sharks’ diets fell smack between a pure herbivore and a pure carnivore, the researchers report, meaning whale sharks are actually omnivores. They may not be the only ones. Research from another team recently showed captive bonnethead sharks are able to live off a mostly vegetarian diet of seagrass and squid.

“Omnivory in sharks may be more common than previously recognized,” Wyatt said.