Mysterious ecosystems that live off the bodies of dead whales may date back to the time of the dinosaurs. 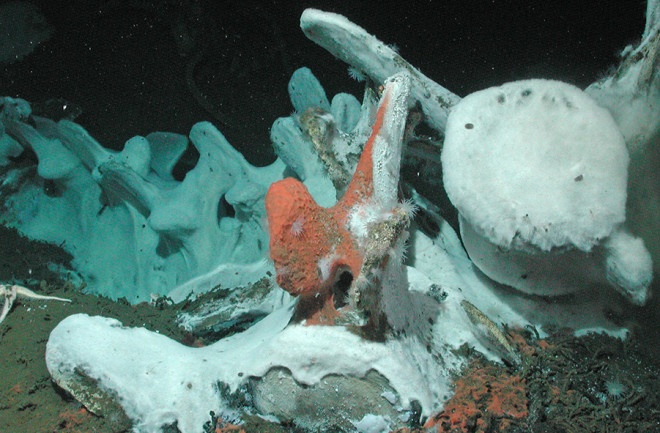 Researchers sank this gray-whale carcass off the California coast in 1998 to study whale-fall ecosystems. By 2002, bacteria coated the bones. Three years later, anemones and bacterial-grazing crabs had joined the feast 5,530 feet below the surface of the Pacific Ocean. (Credit: Craig Smith/University of Hawaii)

In winter 2010, Adrian Glover, a marine biologist from the Natural History Museum in London, got a call from a colleague with some good news. While piloting a remotely operated vehicle to study a hydrothermal vent 4,700 feet beneath the surface of the Antarctic’s Scotia Sea, his friend had stumbled across something unexpected: the skeleton of an Antarctic minke whale.

Rather than being a scene of death, the carcass was an oasis of life in the dark and inhospitable remote sea. Snails, worms, mollusks and white mats of bacteria were feasting on what remained of the massive mammal. Glover asked his friend to bring home a piece of this treasure.

While inspecting the bones in his lab, he discovered nine new species of worms and bacteria. These rare, relatively unexplored, deep-sea ecosystems — lively communities that spring up around dead cetaceans that sink to the seafloor — are called whale falls, or organic falls.

In all, only about two dozen have been found since researchers, led by Glover’s postdoc adviser Craig Smith, chanced upon the first discovery off the California coast in 1987. The 2010 Scotia Sea find was the first in the Southern Hemisphere.

Glover, now at the forefront of this postmortem science, is an expert on some of the worms that move into whale falls. These species and their whale-carcass cohort are helping marine biologists and paleontologists determine exactly how long large, dead marine animals have been hosting these rich communities of decomposers, and whether or not the whale falls of today look eerily like the organic falls of a time when prehistoric reptiles ruled the seas.

Once a carcass sinks, it becomes home to scavengers. Species such as sharks and hagfish consume the whale’s easily accessible soft parts. When the bulk of muscle, blubber and viscera are gone, organisms called enrichment opportunists, including snails, worms and bacteria, settle in, on and around the whale. An important part of this stage are Osedax, bone-eating specialists fondly known as “snotworms” for the mucus they make.

Described for the first time in 2002, these bristly marine worms, or polychaetes, tap into bone and then rely on bacteria to help them break down fats and proteins in their new skeletal homes. But how snotworms populate whale falls in the first place remains a mystery.

Glover believes the unusual worms somehow locate the remains during a swimming larval stage. Once snotworms arrive, the females send “roots” into the bone. Harems of smaller “dwarf” males land on the females, taking up residence on their tube-shaped bodies and fertilizing their eggs.

At the same time, other bacteria gather in great mats and help to break down the bones. Over the slow tick of decades, the whale disappears.

The fossil record tells us — via distinctive Osedax burrows that pockmark bone — that whale fall communities have been around for 30 million years. But some research suggests that these remote ecosystems could have extended even further into the past, before the advent of marine whales about 45 million years ago.

In 2008, Polish Academy of Sciences paleontologist Andrzej Kaim and his colleagues described what could be one of the most ancient organic falls yet known. As they analyzed a pair of 66- to 100-million-year-old plesiosaur skeletons found near Hokkaido, Japan, the researchers realized the fossilized bones of the toothy, quad-flippered marine reptiles* were surrounded by fossilized shell fragments from provannids, a type of tiny snail.

Provannids are ancient survivors. They are still with us today, and they offer a clue about what happened to Kaim’s plesiosaurs. Modern-day provannid snails inhabit ephemeral and remote deep-sea environments — cold methane seeps; hydrothermal vents that spew superheated, chemical-rich water; and whale carcasses — and their prehistoric forebears probably did the same.

“They were apparently living together with the remains of the plesiosaur,” says Kaim. “I’d been looking for this for years. We could now be sure these communities developed around the bones of large reptiles in the Mesozoic.”

There would have been plenty of food for deep-sea opportunists like the provannids in prehistoric times. Starting around 250 million years ago, several lineages of terrestrial reptiles rapidly adapted into large marine forms, including plesiosaurs and fish-like ichthyosaurs.

Even land-dwelling dinosaurs may have fed organic-fall successions of sharks, crabs, snails and bacteria. While all the dinosaurs we know of were terrestrial animals, they were occasionally washed out to sea by floods.

The San Diego Museum of Natural History displays the skeleton of the “Carlsbad ankylosaur,” officially known as Aletopelta coombsi. This poor dinosaur was found among Cretaceous-age marine sediments in California. Shark teeth and bivalve shells were scattered around the dinosaur’s bones, a hint that the heavily armored beast may have once formed a short-lived, edible reef.

“If you have a deep ocean with larger organisms swimming around the surface, dying, falling to dark, cold, oxygenated depths, you’re going to have organic falls,” Glover explains. But did they look the same millions of years ago?

Osedax, or snotworms, bore into old whale bones. With the help of bacteria, they break down fats and proteins into a snotworm buffet. (Credit: Adrian Glover/The Natural History Museum, London)

Glover maintains that unraveling the mystery of Osedax evolution could help find the answer. At the moment, scientists have confirmed, using DNA analysis, that snotworms are closely related to the tubeworms that thrive around hydrothermal vents and probably have existed for as long as whales, if not longer. Glover hypothesizes that young, prehistoric tubeworms may have been traveling from one deep-sea vent to another when they came across the carcass of a marine animal. They landed, found they could survive — due to a fortuitous mutation — and gradually became the Osedax we know today.

The dining habits of modern snotworms hint that the scavengers are not picky. “Put a bone down, and they’ll eat it,” Glover says. Experiments with modern bones, as well as fossil bones of prehistoric birds and fish, show that these worms will dine on any skeletal scrap. But no one has seen Osedax burrows on the bones of the marine reptiles that came before whales.

Kaim’s team saw provannid snails near the pair of Cretaceous-era plesiosaur skeletons, but no Osedax. “Either they weren’t present at this particular site, or they simply hadn’t developed yet,” he explains.

But Kaim did find what he believes is evidence of bacteria eating the plesiosaur bones: tiny burrows visible only by cutting a cross-section of bone and examining it under a microscope. The same thing is found at present-day whale falls during the sulfophilic stage — the last and longest part of organic-fall succession, when bacteria produce hydrogen sulfide as they break down what's left of the bones.

“We saw the exact same type of community you would see at a whale fall today, but quite simplified,” says Kaim.

In addition to investigating snotworm evolution, Glover is working with paleontologists to study the structure of the holes Osedax carves into bone, so he and others can refine their search of the fossil record. “It may be that as we re-evaluate fossil evidence such as Kaim’s plesiosaurs, we find traces of Osedax,” he says.

Without bone-eating specialists such as the snotworm, prehistoric organic-fall ecosystems could have looked very different. “We’re only just starting to understand the role Osedax plays in the degradation of bone,” says Glover, “but they likely speed up the process.”

Understanding the snotworm’s course through history, and the tracks it leaves, could reveal that the intricate whale-fall ecosystems of today look nearly identical to organic falls from a time when there were true dragons in the deep.

[This article originally appeared in print as "Deep-Sea Secrets."]

*Update, 12:25 p.m., 19 August: This article originally mistakenly called plesiosaurs marine mammals — they are, of course, marine reptiles. We apologize for the error.