Westerners focus on the eyes, East Asians on the nose

When you look at someone's face, what part do you concentrate on? Common wisdom has it that the eyes are the focal point of the face and they are the features that draw attention first. But according to a new study, that may not be universally true - while Western cultures do fixate on the eyes, East Asians tend to focus on the nose. 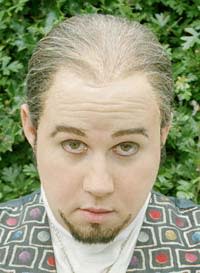 We owe a lot of our knowledge about the way we look at images to a Russian psychologist Alfred Yarbus. He was the first scientist to carefully record the subtle eye movements that people make when they take in a view. Yarbus's experiments showed that our gaze rapidly flicks back and forth across an image so that our centre of vision focused on the most important parts. For example, while surfing websites, our eyes tend to focus on headings, words at the top of the page and words on the left.

The same thing happens when we look at faces. Previous studies have found that viewers tend to flick their gaze between the eyes and the mouth - an inverted triangle of important features. Some psychologists have taken this to mean that humans have a single, universal and innate strategy for processing faces. But this conclusion has a big snag - it's only really based on experiments done with Western populations.

To get a more cross-cultural perspective, Caroline Blais and colleagues at the University of Glasgow tracked the eye movements of fourteen white Western students and fourteen East Asians, eight of whom were Chinese and six of whom were Japanese. The East Asian volunteers were all students who had recently enrolled in the university and had never been to a Western country before.

Look into my eyes...

Blais told the students that they had to learn a set of faces, including both Western and East Asian ones. After the learning trials, they were shown a larger set of mugs and had to say which ones they recognised (and the expressions on the familiar faces were changed to make things a bit more challenging). Later, they had to categorise a set of faces according to race, as quickly and accurately as possible. All of these tasks were essentially red herrings. What the researchers were interested in was the features that the students spent most time looking at.

The results were striking - the two groups of students fixed their eyes on distinct facial features. The Western eyes focused heavily on the eyes and the mouth, exactly as predicted by other studies. But the eyes of the East Asian students homed in on the centre of the face, halfway up the nose and right in the middle of the triangle of attention carved out by their Western peers. In the image below, the red areas show where the Westerners fixed their stares, while the blue areas were preferred by the east Asians. 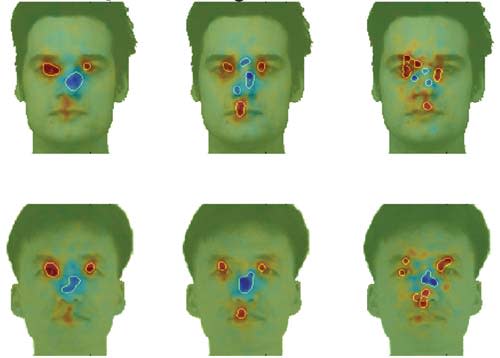 The race of the face itself didn't matter - the volunteers' eye movements were dictated by their own culture and not that of the person in the image. And the students also showed the same biases in all three of the tasks they had to do - learn a face, recognise a face and categorise a face. The first two are considerably more complicated than the third but even so, the students always focused on the same features.

While some may criticise the study's small sample size, the differences are certainly very pronounced and highly statistically significant. Blais's team also took every precaution to ensure that they were measuring real strategies of perception. For example, they made all the images that popped up on the screen appear at a random corner, to make sure that students had to make a bit of effort to start looking at it.

Why the difference? It certainly isn't because Western faces are more easily distinguished by their eyes and East Asian faces by their noses - an analysis of the faces didn't back up that idea. Instead, Blais has two alternative ideas. It could be that it's impolite in East Asian cultures to make direct or prolonged eye contact, and focusing on the centre of the face is simply a way of avoiding a social faux-pas. The second and more interesting theory, is that these strategies reflect general differences in the way that Westerners and East Asians view the world around them.

Some psychologists have suggested that Westerners view the world in an analytic way, by focusing on key features, while East Asians have a more holistic perspective where an object's context is just as important as its parts. There's a wide range of experiments that back up this hypothesis. For example, one group of Japanese and American researchers showed people two squares of different sizes, one of which had a line inside in. They asked their volunteers to draw a line in the empty square that was either exactly the same length as the first line or proportionally as long, relative to the different sizes of the square. They found that Westerners were better at the first, more absolute task, while East Asians were more accurate at the second relative task.

Does this apply here? Possibly, although Blais's results don't quite gel with other studies. When it comes to complex scenes, for example, Westerners focus on central objects but East Asians also flit their eyes across the backgrounds. In this study, the East Asians were the ones who focused on the centre but Blais suggests that this could be because they were homing in on the area that gives them the best overall view of the entire face, namely the centre. It's an interesting idea but at this stage only a possible one.

Regardless, it's clear that our culture affects the way we look at each others' faces. It will be interesting to see if this is the case from birth, or whether people develop these varying strategies as they grow and pick up the habits of their countrymen.

Update: Want a different take on this story? Check out Scicurious's excellent work at Neurotic Physiology.