In some spaces, neighbors share a tree while eating — and in others, things get violent. 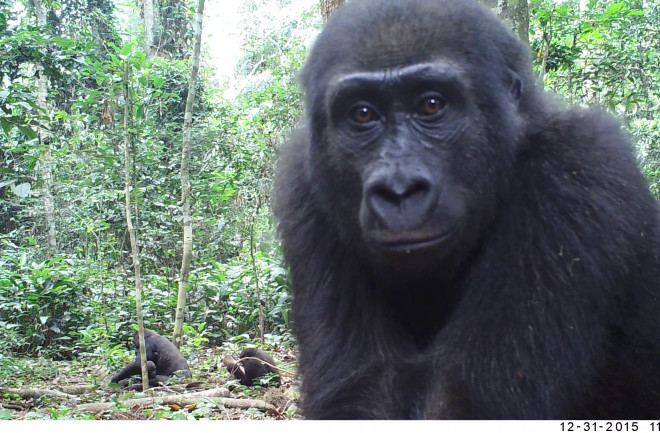 Western gorillas are notoriously difficult to study. They live among dense rainforest, and habituating them to humans can take five years, says Robin Morrison, an anthropologist with the Dian Fossey Gorilla Fund.

“I can count the number of habituated [western gorilla] groups in the world on one hand,” she says. So to get a close look at how they interact with one another, Morrison and her team used some inconspicuous surrogates for human eyes: high-definition cameras.

What they saw contradicted some beliefs about how these massive primates use space and interact with others. Though previous researchers assumed that western gorillas aren’t territorial, Morrison and her team found the opposite is true — they just display protective behavior differently than other wild primates. In a study published Wednesday in the journal Scientific Reports, Morrison and her co-authors explain that recorded western gorillas groups aggressively defend central areas of their home turf. At the same time, they peacefully cohabitate in forests where other groups’ territory overlaps with theirs.

This and other new gorilla studies, Morrison says, indicate that “their social system is more complicated than we gave them credit for.” The findings could add nuance to our understandings of where human social behaviors came from. At the same time, they suggest how deforestation could force the dwindling members of the species to confront one another more.

Typically, most primate researchers perceive chimpanzees as truly territorial primates. This relative of ours also lives in packs. Members will patrol the borders of their home range, and too much overlap can make neighboring groups get violent. Since gorillas are harder to study and have been seen eating and living alongside gorillas from other groups, “that doesn’t square well with what we see in chimps,” Morrison says.

With cameras across 23 square miles of Republic of Congo forest, Morrison and her team recorded eight gorilla groups interacting at popular feeding places for a year and a half.

The bits of motion-activated video recording showed that in overlapping boundaries, gorillas from different groups tolerated each other fine, and might even sit peacefully in a tree together while they ate. If gorillas from another pack ventured too far into a group’s core range, however, things got more intense. Males might charge and try and bite one another. The most dominant males, called silverbacks, might kill intruders, Morrison says.

What Gorillas Can Teach Us

The team still doesn’t know what prompts such different degrees of tolerance. It’s also not quite clear why gorillas tread into another group’s region. Maybe they want a new mate, Morrison says, or food from a rarely fruiting tree.

Either way, maybe this more subtle type of territoriality could help explain how early humans handled their own turf. Earlier models turned to chimp-style aggression as an explanation for human warfare, Morrison says. But since we also interact in collaborative ways with people we don’t know, maybe some of the gorilla approach applies to us, too.

“Without these tolerant areas, we wouldn’t be able to build this kind of large-scale cooperation for human society,” Morrison says, though she adds that this theory is still in its very early days.

It’s also worth considering what this use of space could mean for gorilla conservation. If these primates are more defensive of core regions than we thought, then decreasing their habitat could lead to more aggression between factions — which could limit their overall health and population growth, Morrison says.

Roughly 80 percent of these gorillas live outside protected areas, says Morrison. And those spaces are increasingly vulnerable to new infrastructure projects and deforestation, which are slowly closing in on the areas where our enigmatic relatives can safely live.