New research suggests that a group of volcanoes in Alaska might be all related to a single large caldera, but this doesn't mean we have a new Yellowstone. 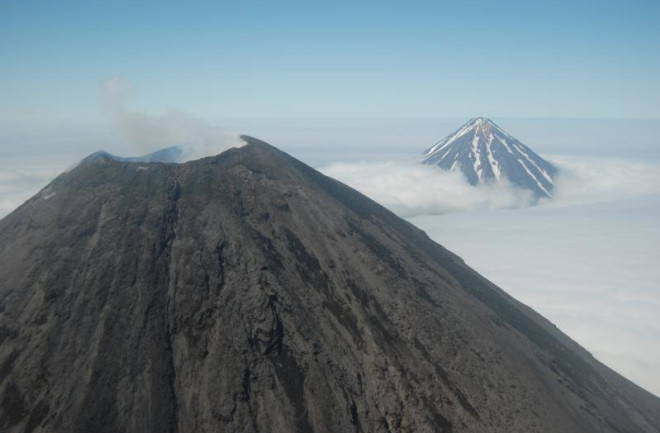 The summits of Cleveland and Carlisle volcanoes in the Aleutian Islands seen in 2016. Credit: Taryn Lopez, AVO/UAF/USGS

It is always exciting when we discover something unexpected. Our understanding of volcanoes is still really in its youth, so we're still generating new insights into how volcanoes operate and how much interaction there might be between neighboring volcanoes. Just this month, researchers looking at a cluster of volcanoes in Alaska now think that they might be part of larger volcanic complex ... and that complex might harbor a large caldera that could have been the source of some giant eruptions.

However, as cool as this research is (and it is!), many articles covering this seem to have jumped directly to the conclusion that it is some sort of new Yellowstone. The media is always drawn to the massive caldera system in Wyoming and loves to compare volcanic eruptions with what happened there over the past 2 million years. This does an injustice to both Yellowstone and whatever other volcanoes are being examined.

Let's start with some basic volcanology: there are many examples of large volcanic clusters around the world. Some are large caldera systems like Yellowstone, Toba or Taupo. They have the main caldera (depression) formed during a major explosive eruption and maybe some other volcanoes grow on the edges/in the middle of the caldera. They might all share similar sources of magma in the crust or they might merely be coincidental. We can examine the composition of the magma that erupts, the seismicity under the area, the volcanic gases emitted between eruptions and more to potentially link them together.

Sometimes volcanic clusters don't have massive calderas. I've worked on a couple of these. The Aucanquilcha Volcanic Cluster in Chile has a dozen (or more) volcanoes that have erupted over the past 11 million years and appear to have shared a long evolving magmatic system underneath the high desert. The Lassen Volcanic Center in California is another, where many eruptions have happened from different volcanoes over the last ~900,000 years - including California most recent eruption at Lassen Peak.

This clustering of volcanoes seems to be a recurrent pattern around the globe. What controls whether we have a lone volcano (like Mount St. Helens) or a cluster of volcanoes is still unknown. The Three Sisters area in Oregon is likely another large volcanic cluster and it covers roughly the same area as the proposed volcanic cluster in Alaska. Whether the volcanism at North, Middle and South Sister, along with Broken Top, the Tumalo Volcanic Center, the Devil's Hills (and more) are related is still being explored (by people like me!)

Six Volcanoes for the Price of One

So, back to Alaska. When your volcanoes are partially under the ocean forming individual islands, it can be especially hard to determine if they might be linked deep underground. The sextet of volcanoes -- Carlisle, Cleveland, Herbert, Kagamil, Tana and Uliaga -- have all been active over the past few thousand years. In fact, Cleveland is one of the most active volcanoes in all of the Aleutians. Yet, even with their proximity, no one had ever suggested that they might actually be part of one, large volcanic system.

At the current American Geophysical Union Fall Meeting, a group of researchers proposed that such a large volcanic system does exist. They point to submarine bathmetry, a gravity anomaly under the region that suggests interconnected magma bodies, constant gas emissions at Cleveland, odd volcanic gas emissions at Tana and shallow earthquakes under the area as evidence that this area is all part of a single volcanic system. They also suggest that two large tuff deposits (created by large, explosive eruptions) may be sourced from the hidden caldera that could connect all these volcanoes poking up out of the sea.

The six volcanoes proposed to be part of a large caldera system in Alaska seen in August 2020. Credit: Landsat 8, USGS.

In the face of this evidence, linking them together makes sense and is definitely reminscent of over volcanic clusters. The Aucanquilcha Volcanic Cluster, Lassen Volcanic Complex and Three Sisters share many of the same traits as this Cleveland volcanic group: volcanoes in close proximity and evidence of giant volcanic eruptions in the form of volcanic tuff deposits whose source is now buried/missing. None of these other clusters have a lot of activity, so the active volcanic properties like gases and earthquakes are harder to compare.

Not Everything is Yellowstone

Automatically comparing what might have been discovered in Alaska with the lightning rod of media sensationalism that is Yellowstone is dangerous. There is no evidence so far that this Alaskan cluster has anywhere close to the same explosive power as Yellowstone. The explosivity at Yellowstone is directly connected to the type of magma that it erupts: rhyolite. This sticky, high silica magma drives the big booms. The evidence so far in Alaska doesn't suggest the same thing. The footprint might be similar, but that doesn't mean we looking at the same type of volcanic giant.

So, no, we haven't discovered a new Yellowstone in Alaska. The Aleutians have been home to many large, explosive eruptions (like the largest in the 20th century). A better understanding of whether this cluster is actually a singular magmatic system or merely closely allied will be fascinating to explore as researchers dig into the evidence.