Watching the Birth—and Death—of an Island

In the South Pacific, the crew of a yacht saw new land form right beneath their boat. 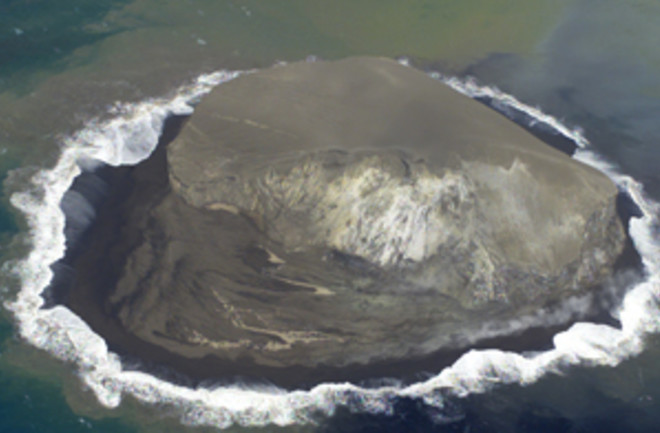 A 240-foot-tall volcanic island in the South Pacific was still venting sulfur gases in December 2006, four months after it emerged from the sea.

The first thing Swedish sea bum Fredrik Fransson noticed as he set out from the Vava’u Islands in Tonga last August was that the water was the wrong color. Instead of the familiar deep blue of the open ocean, the waters surrounding the Maiken were lagoon green. Then as the vessel continued westward, the surface of the ocean inexplicably turned to stone. “We looked out, and in front of us it was as if there was no more sea,” he recalls. “It was like the Sahara, with rolling hills of sand as far as the eye could see.” But the Maiken hadn’t run aground. Instead, she had sailed into a massive raft of floating pumice stone. No one on Earth knew it yet, but just a few miles away, the ocean floor was violently thrusting up fresh new land.

“Often in the South Pacific you have clouds on the horizon, but this time there was one that stood out,” Fransson says. “Then we saw a black pillar shooting up into the air, and we understood that it had to be a volcano.” Fransson and his shipmate cautiously navigated toward the smoke. Where the chart said there should be an under-water seamount called Home Reef, they found an island, growing one explosion at a time. “It was kind of a smoldering, smoky stuff. It looked like coal, and when there was an eruption, we could see the new material piling up on it,” says Fransson.

Barnacles and mollusks hitchhiked on erupted pumice, which drifted more than 2,000 miles from Tonga to Australia. | Image courtesy of Scott Bryan

When the Maiken crew posted their observations online, scientists jumped at the news: Undersea eruptions probbly occur dozens of times a year, but they are mostly in remote places or at extreme depths, so they are rarely witnessed by humans. Greg Vaughan, a geologist with NASA’s Jet Propulsion Laboratory, says, “We decided right then that we needed to get in there and get some satellite data.” NASA’s ASTER and MODIS instruments captured bird’s-eye views of the new island, allowing researchers to gauge the temperature of the heated waters surrounding it and track the giant pumice rafts that the volcano had spewed out. By Vaughan’s estimation, it was the first time scientists had ever been able to study an island-forming eruption with images from space.

Meanwhile, volcanologist Scott Bryan of Kingston University in London was gunning for a research expedition to the island before it disappeared. Many new volcanic islands are ephemeral, lasting only months before disappearing again under the sea. “Ultimately, it’s a battle between the frequency and volume of eruptions and the wave action taking it back down to sea level,” says Bryan. The type of material that erupts also affects an island’s life span. True lava forms more enduring structures—like Surtsey in Iceland, which broke through surface waters in 1963 and remains exposed today—while islands of mostly pumice and ash are quickly torn down by the waves.

That didn’t bode well for Fransson’s find. When Bryan finally reached the site this February, he found that the new island—originally over a tenth of a mile square—had already nearly washed away. The rotten-egg smell of sulfur dioxide gas hinted that magma was still cooling inside. Although sea conditions were too rough to make landfall, Bryan was able to collect water samples near the volcano for chemical analysis, which is currently under way. By now, he says, a shallow seamount is probably all that remains of the surprise island at Home Reef.

The yacht Maiken cut through a giant pumice raft during the eruption.

Though the exposed island existed for only a few months, the eruption may have a lasting biological impact. Pumice rafts remain afloat for months or even years, becoming home to barnacles, corals, algae, oysters, tube worms, and even the odd anemone. In April, eight months after the eruption, pumice from Home Reef that had been heavily colonized by such organisms washed up in Queensland, Australia, more than 2,000 miles away. The diversity of the famed Great Barrier Reef in Australia may be stocked in part by pumice stowaways from eruptions in distant waters, says Bryan, who is studying the rafts with his colleagues. “It’s an amazing interaction of all these different aspects of Earth and surface processes, which are so dependent on one another,” he says.