Watch This: Hummingbirds Fly Forwards and Backwards With Equal Ease

Scientists took high-speed videos of hummingbirds in flight to see which was harder, flying backward or forward? 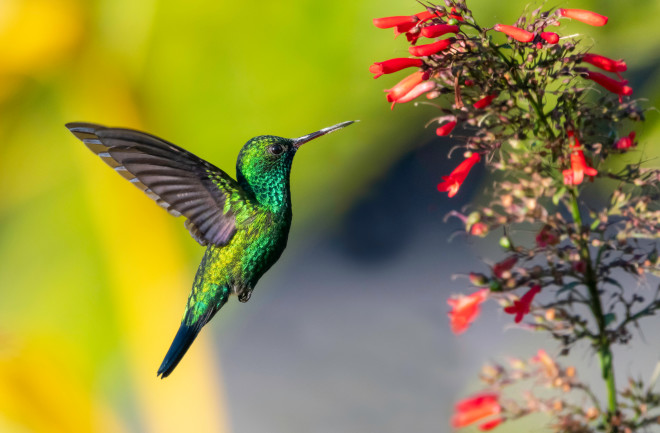 Hummingbirds are incredible flyers, with the ruby-throated hummingbird beating its wings 80 times every second, an ability that inspired this blog's name. These tiny birds can fly forwards, hover, and are the only known birds to fly backwards as well. But although zooming backwards is the rarest of the hummingbird's flying tricks, a paper in the Journal of Experimental Biology reveals that it takes no more energy than moving forwards.

In the video above, an Anna's hummingbird hovers in the still air of an inactive wind tunnel and sips sucrose from a syringe. When researchers turned on the air, the bird had to push backwards in order to reach its snack, as seen in the following video.

To make the bird fly forwards, the researchers just reversed the position of the syringe. Although it looks similar to the other two videos, in the clip below, the hummingbird is flapping forwards.

Clearly, it's hard to tell these modes of flight apart. To quantify the differences, researchers took high speed videos like these, to measure the birds' posture and wing motion, and monitored oxygen intake, to see how much energy flying took.

They found that hummingbirds breathe just as heavily during backwards and forwards flight. In fact, flight in either direction was actually more energy-efficient for the hummingbird than hovering in still air. Their ability to dart and dodge makes hummingbirds nectar-gathering pros ... even if they're not so great at sitting still.