Higher resolution imagery from weather satellites reveals fine-scale features within storms and is also playing a role in improving forecasts. 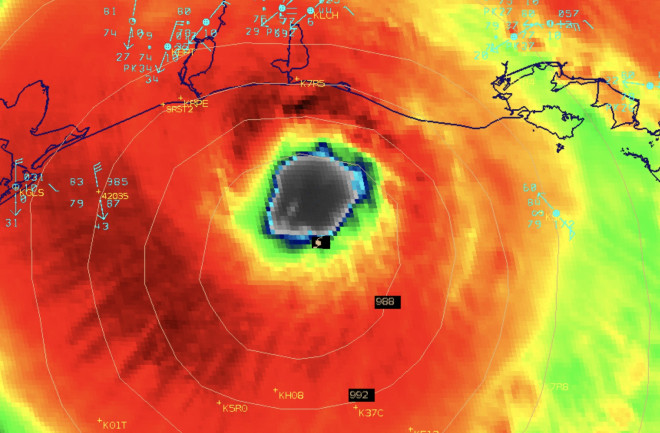 The GOES-16 weather satellite captured this infrared view of Hurricane Laura just before it made landfall near Cameron, Louisiana on Aug. 27, 2020. (Credit: Screenshot from animation by the Cooperative Institute for Meteorological Satellite Studies)

As Hurricane Laura was storming ashore in Louisiana with vicious winds of up to 150 miles per hour, the GOES-16 weather satellite had a sharp eye on it.

Thanks to high-resolution data returned by the satellite, we can watch in remarkable detail as the cyclone sliced into the coast and cut a path of destruction inland. You can get a sense of that from the static image above. But also check out this animation created by the Cooperative Institute for Meteorological Satellite Studies at the University of Wisconsin:

These CIMSS animations show Laura making landfall at about 1 a.m. local time as a Category 4 storm. They consist of images acquired at intervals of just one minute apart by GOES-16. (For more on the storm from CIMSS, go here.)

In the first view, the storm is visualized in the infrared, with an overlay in blue showing regions where lightning flashes are occurring. This "flash extent density," or FED, visualization portrays the number and concentration of lightning flashes, along with their horizontal extent — which can stretch over hundreds of miles from where a given flash originates.

The second view shows the hurricane in visible light. And the third view shows Hurricane Laura in the infrared again, but this time without the flash extent density added.

GOES-16 can discern features as small as about 500 yards across. If this doesn't sound like that fine a resolution, consider that the satellite is capturing these views of so-called "mesoscale" features from 22,000 miles away!

The satellite's ability to provide such high resolution at one-minute intervals is "the true game-changer in terms of tropical cyclone monitoring and forecasting," says Scott Bachmeier, a research meteorologist at CIMSS. "The improved spatial resolution of the imagery also helps to better resolve mesoscale details in the storm structure."

Such details include near-the-surface clouds swirling in cyclonic patterns within the eye of a hurricane. You can see these mesovortices in the part of the animation acquired with visible light. Although these features have been seen by earlier generations of weather satellites, they're being revealed in much better detail now.

Also visible in the animation is a phenomenon known as cloud-top gravity waves. In the infrared view, they look a little like dark spokes radiating from the storm's center. Here's a great explanation from Jenny Staletovich of the Miami Herald:

"Gravity waves are produced when air moving around the atmosphere gets pushed from one place to another. In a hurricane, those waves can come in quick, short bursts as powerful thunderstorms around the storm’s eye wall swish air up and down like a plunger in a toilet bowl."

Gravity waves like this are often seen with tropical cyclones that are at or near their peak intensity, according to Bachmeier.

It's not just improvements in resolution that are helping to reveal features like this in greater detail than ever. Other improvements to the instruments "are providing imagery that is more 'crisp,' which allows small-scale features to be more easily identified and tracked," he says.

Overall, forecasters are doing a much better job of predicting some aspects of hurricane behavior. As Bachmeier describes it in an email, "Track forecasting has greatly improved over the past several years — but accurate intensity forecasting remains elusive. Better (and more) numerical models have driven much of the improvements in track/intensity forecasting, but satellite data that gets assimilated into many of the models also plays a role."