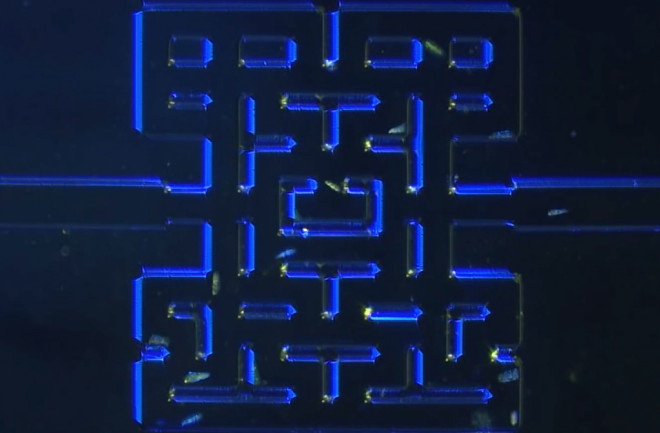 (Credit: HSN/Adam Bartley lyslagt/Knut J. Meland) It's a microbial blast from the past. Researchers from the University College of Southeast Norway painstakingly recreated the labyrinth from Pac-Man and populated it with real-life Pac-Men and Ghosts — in the form of microscopic organisms. In the maze, which measures less than a millimeter across, euglena and ciliates take on the title character's role, while rotifers act as Ghosts, chasing and eventually eating the Pac-Microbes. Nostalgia aside, the tongue-in-cheek experiment actually functions as a fairly good simulation of the peat and moss environments where these organisms typically live. Unlike the two-dimensional petri dishes where they are usually studied, a 3-dimensional maze recreates the tunnels and pathways where rotifers chase their prey outside of the laboratory, allowing the researchers to study their interactions with greater accuracy. They hope that the universally-recognized structure will help to stir public interest in organisms that are too small for the naked eye to see — but who act out a shockingly faithful simulacrum of a decades-old video game. [embed]https://www.youtube.com/watch?v=GvZm9EXqrdU[/embed] Erik Andrew Johannessen, who led the project, observed the rotifers getting better over time as they navigated the maze. He thinks that this may be a result of chemical trails that the organisms leave behind as they hunt, helping them to find their way in familiar territory. He hopes to continue using the maze to find out if there is some element of logic at play in the rotifers hunting decisions — perhaps making them a little more like the virtual Ghosts whose role they play. Pac-Man may have been a colorful distraction (and one of the highest-grossing arcade games of all time), but its simple premise is actually a fairly good recreation of predator-prey interactions out in the real world. No word yet on which euglena or ciliate holds the current top score.