Watch: Man Takes Back To Back Bites From Two Of The World's Deadliest Snakes To Prove People Can Become Immune To Snake Venoms 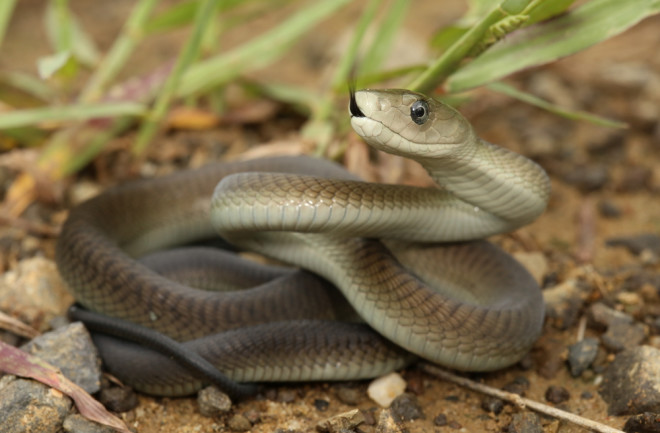 Black mamba venom is among the world's deadliest, with potent neurotoxins that can kill a person in a matter of minutes. Photo by NickEvansKZN "A bite from the black mamba Dendroaspis polylepis is an event that poses an immediate threat to life," explained scientists in a 2011 case report. "Given the content of neurotoxins in the snake’s venom, the mortality of envenomation reaches 100% in almost every case if ventilation is not provided in a timely manner and adequate therapy initiated." The article goes on to give the account of a 31-year old man who arrived in the emergency room after he was bitten by one of these notorious snakes. He was sweating, his heart was racing, and his blood pressure was through the roof. He had to be intubated almost immediately as the neurotoxic venom was shutting down his diaphragm muscles, and he was struggling to breathe. Over the next two days, he was on the brink of death, requiring dose upon dose of antivenom. But, he was lucky. Fifty-eight hours after the bite, thanks to extensive medical intervention, he was finally able to breathe on his own, and he went home the next day. Black mambas aren't just lethal — because of the volume of paralytic venom they inject and how potent that venom is, they are strong contenders for the deadliest snake on Earth. But Tim Friede isn't one to be scared by words like "deadly" or "lethal." He's been injecting himself with snake venom for more than 16 years in an attempt to build up a natural immunity to the most notorious snakes. And according to a recent TV special from Barcroft USA (video embedded below), he's succeeding. "To prove his self-immunization theory works," the narrator explains, "he recently took back-to-back bites from two of the world’s deadliest snakes." "I have a mojave rattlesnake, water cobras, PNG taipan, black mamba, and western diamond back rattlesnake, and I can take a bite from all of them," says Friede. Friede is not one to shy away from media attention — or confrontation — when it comes to self-immunization (SI). A quick google search finds dozens of articles written about him and the hundreds of bites he's survived over the years. Back in 2013, he attempted to take five venomous snakebites in forty-eight hours while writer Kent Russell looked on (Friede only completed four). And on his YouTube, Friede posts graphic videos of bites and openly antagonizes venom scientists who criticize SI. His devil-may-care attitude rubs many the wrong way, even some supportive of his mission, but Friede just shrugs off the 'haters' ("Ur opinon means nothing to me"). Those critics include an overwhelming majority of scientists, medical professionals, and venomous reptile experts. They say that any potential benefits of SI are far outweighed by the risks, which include allergy, infection, tissue damage, organ failure and, of course, death. When I spoke to Jim Harrison, director of the Kentucky Reptile Zoo, for my upcoming book Venomous, he told me of several cases where he was called upon* to provide antivenom in a last-ditch effort to save the life of a self-immunizer who either had overdone the dose or overestimated their resistance. According to Friede's friend and fellow SIer Ray Hunter, Friede himself was one of those cases. As the video shows, Friede's given up a lot to pursue his dangerous self-experiment. "He has a love affair with his animals," his ex wife, Beth Friede, says. The couple have two kids, ages 11 and 18. "Me and the kids never came in first, sometimes not even second. The snakes were always first." Though his obsession with SI tore his family apart, Friede is far from alone. The SI Facebook group, which Friede is an administrator for, boasts almost 2,500 members (though it's not clear how many of them actually practice SI). He has even attracted the attention of a few medical professionals and scientists who think his dangerous hobby might lead to better snakebite treatments. Friede hopes that his blood can be used to make a vaccine for snakebites, to prevent the tens of thousands of deaths that occur every year. "I will not stop doing this until the vaccine is in the field or I die." http://youtu.be/ucpGlWnq8EE Read more about self-immunization in my upcoming book Venomous: How Earth's Deadliest Creatures Mastered Biochemistry,

* The zoo is stocked with antivenoms for all the species of snakes it houses, in case anyone on staff is accidentally bit