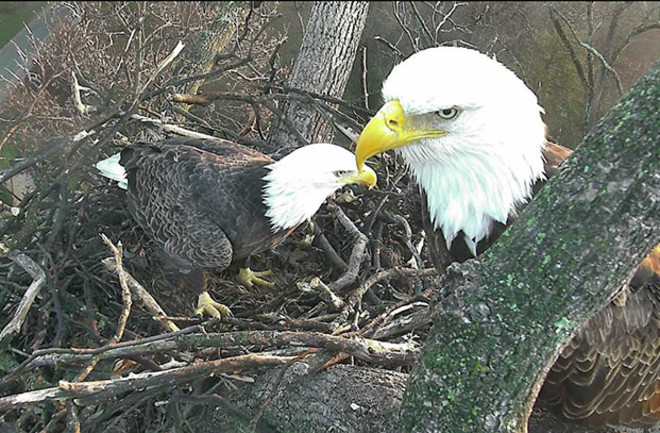 Bald eagles in their nest at the Arboretum. (Credit: Sue Greeley/American Eagle Foundation)

Update: After days of anticipation, the first of two eaglets fully emerged from its shell at roughly 8:20 a.m. EST Friday. The second eaglet is expected to begin chipping out of its egg in the next few days.

The first of a pair of bald eagle eggs at the U.S. National Arboretum is expected to hatch today. Officials at the Arboretum say that cracks have already appeared in the first egg, and the chick is expected to emerge over the course of the next 12 to 48 hours.

You can watch the tiny eaglet struggle out of its shell live courtesy of the DC Eagle Cam, hosted by the American Eagle Foundation.

Bald Eagles Are Back

They say a crack was first spotted in one of the shells Wednesday night around 7 p.m., and by this morning it had spread all the way down the shell. The second egg has not yet begun the pipping process, or the initial cracking of the shell, but officials say they expect it to start within a day or two.

The proud parents, named “Mr. President” and “The First Lady” established a nest at the Arboretum in Washington D.C. in 2014. They are the first bald eagles to pair up and make a home in the area since 1947.

Eagles typically lay around one to three eggs a year, and incubate them for a little over a month. Last year, the couple raised a single chick in the same nest.

As a word of warning: This is a wild eagle nest, and anything can happen. While an eaglet hatching is a beautiful moment, predators, sibling rivalries and nasty weather could challenge these birds moving forward — it could be difficult to watch.