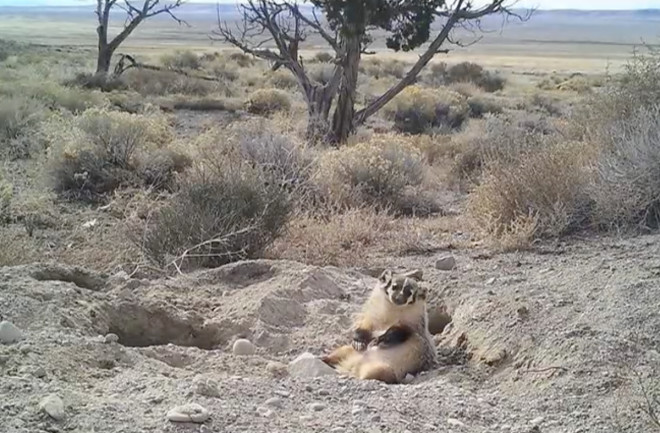 A proud badger sits atop the calf it buried over the course of five days.

To watch how scavengers behave around a carcass, Evan Buechley, a doctoral candidate at the University of Utah rounded up calf remains and staked them out in the desert under the watchful eye of a camera trap. He expected to find coyotes, ravens, bobcats and turkey vultures picking over the remains, all part of the usual cast of desert-dwellers.

But one particular creature wasn’t going to leave such a bountiful feast sitting there in the open, though. As soon as the badger happens upon the find it sets right to digging, eventually excavating a pit big enough to swallow the dead calf whole. Its devious task accomplished, the badger sits proudly atop the freshly filled meat locker, not a care in the world.

“Not to anthropomorphize too much, but he looks like a really, really happy badger, rolling in the dirt and living the high life,” Buechley said.

Watch it Dig! Look At That Digging!

When Buechley first went to check on his calf, he thought it had been taken by a larger predator — so sneaky was the badger’s handiwork. The freshly-turned earth tipped him off to the nature of the crime, and he confirmed his suspicions with footage from the camera trap, which showed the badger returning over the course of five days to dig and drag the calf into the hole. Badgers are known to cache prey underground, both to hide them from other predators and preserve them, but this is the largest animal any badger has been caught burying. They published their findings in the journal Western North American Naturalist.

American badgers often find prey by digging, but aren’t averse to noshing on carrion when they find it. They’re also ferocious diggers, using their shovel-like paws and heavy claws to both chase after subterranean prey and hide food after they’ve eaten their fill. The badger observed by Buechler spent the next two weeks in its burrow, apparently satisfied with its work.

Buechler hopes  his research will help inform the opinions of ranchers in the area, who often view badgers as pests. Burying dead livestock could actually be a boon to the ranchers however, as it reduces the possibility of disease among the living animals, and keeps other scavengers away.

It Has No Regard For Any Other Animal Whatsoever

Of course, if the badgers are stealing whole carcasses, they could be limiting other animals access to crucial sources of food and nutrients. With more camera traps and further study, the researchers hope to learn more about badger behavior, which, due to their nocturnal, subterranean nature, isn’t very well known.

All of this, obviously, comes as no surprise to the internet’s favorite badger expert: Randall.

“The honey badger has been referred to by the Guinness Book of World Records as the most fearless animal in the animal kingdom,” he says. “If it’s hungry, it’s hungry … It has no regard for any other animal whatsoever. Look at him, he’s just grunting, and eating snakes. Eew! What’s that? A mouse? Oh that’s nasty. They’re so nasty. Oh look it’s chasing things and eating them.”