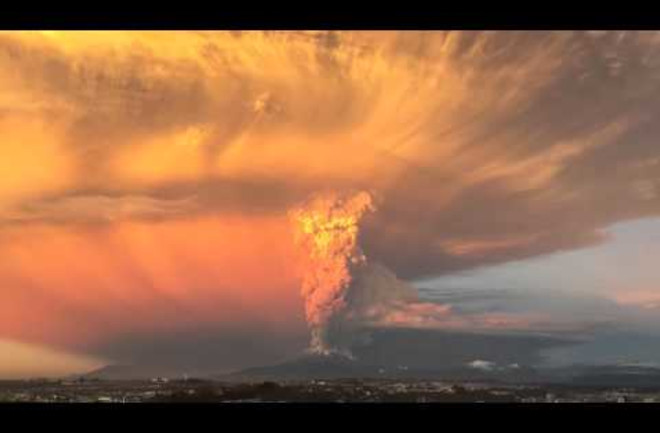 Chile’s Calbuco Volcano awoke from a four-decade slumber Wednesday, and you could say it woke up on the wrong side of the bed.

The 90-minute eruption was a chilling demonstration of Earth’s power. Calbuco spewed a column of ash 7 miles into the sky, causing some 5,000 people in the area to evacuate for their safety. And as magma lit up the night sky, Calbuco showed the world why ancient cultures forged spiritual connections to these events.

But Calbuco showcased something else during its tantrum: lightning storms. And in fact so-called volcanic lightning is a well known phenomenon, though why exactly it occurs is still under investigation.

As a starting point, it’s important to note that scientists still debate how lightning in general forms, and volcanic lightning is an even deeper mystery. Lightning from volcanoes typically occurs close to the start of larger eruptions — so it’s not the easiest subject to study.

The first attempt to scientifically explain volcanic lighting was published in the journal Science in 1965. Only a few other studies have attempted to gather meaningful observations of volcanic lightning over the past 50 years, but they’ve generated a few general theories.

What’s mostly agreed upon is that volcanic lightning is caused by charges that accumulate on rock fragments, ash and ice in the volcanic plume. Lightning results when this charge differential reaches a tipping point.

Where Does the Charge Come From?

Studies have shown that there are two flavors of volcanic lightning: one that occurs at the mouth of the volcano, and another that occurs in the ash plume. The place where scientists disagree is in where and how particles receive their charge in the first place. As i09 reported in 2013:

“One hypothesis…suggests that magma, rock and volcanic ash, jettisoned during an eruption, are themselves electrically charged by some previous, unknown process, generating flashes of electricity near the volcano’s opening. Another holds that highly energized air and gas, upon colliding with cooler particles in the atmosphere, generate branched lightning high above the volcano’s peak. Other hypotheses, still, implicate rising water and ice-coated ash particles.”

So the science regarding volcanic lighting isn’t quite settled, but there’s certainly no questioning its dramatic flare.