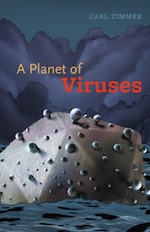 Here's a gratifying review of A Planet of Viruses, just out in the Washington Post:

In A Planet of Viruses (Univ. of Chicago, $20), science writer Carl Zimmer accomplishes in a mere 100 pages what other authors struggle to do in 500: He reshapes our understanding of the hidden realities at the core of everyday existence. The question “Who am I?” is as old as Moses, but Zimmer suggests that on a fundamental DNA level, each of us is actually more virus than “I.” He digs into the head-spinning adaptability and variety of viruses, while revealing lots of interesting information, such as the potential healing power of bacteriophages (viruses that infect bacteria). That last topic is particularly newsworthy as we stride into an era when the over-use of antibiotics may have helped bacteria develop increasingly tough skins and bad attitudes. “It’s clear now,” Zimmer writes, “that phage therapy can treat a wide range of infections. . . . Scientists at the Eliava Institute [in the country of Georgia] have developed a dressing for wounds that is impregnated with half a dozen different phages, capable of killing the six most common kinds of bacteria that infect skin wounds.” Whether he’s exploring how viruses come to America or picking apart the surprisingly complicated common cold, Zimmer’s train of thought is concise and illuminating.

I particularly appreciate the fact that the reviewer sees its brevity as a strength, not a weakness. Books shouldn't be 500 pages simply to be 500 pages. I like to follow the example of virus genomes. Here's a flu virus genome, which you can print on a single page. It may not have the bloated grandeur of the human genome, but it definitely gets the job done. [Update: Commenters have pointed out that the link I provided goes to the sequence of just one of eight segments in the flu genome. Fair enough. Rather than waste time cutting and pasting them altogether, I found this page with the genome of human papillomavirus (the cause of cervical cancer and reckless ignorance among certain politicians). In 10-point type, I fit its genome on two pages. That's more than one page, yes, but I think my point still stands: brevity can be a strength, not a weakness.]