Pithovirus sibericum is still viable after its long freeze. 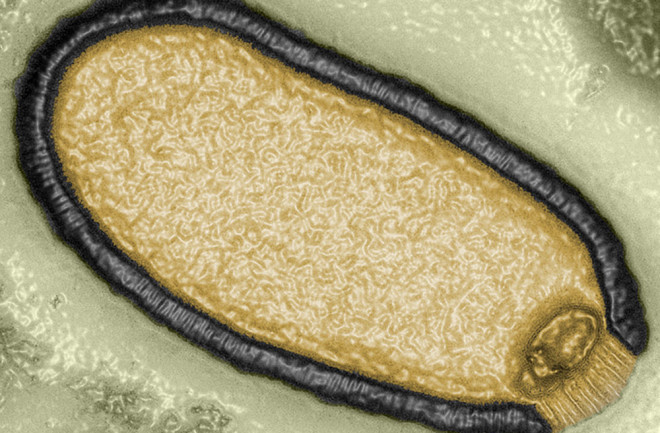 Giant virus Pithovirus sibericum, shown here in an electron microscope image, is large enough to be seen even under an optical microscope. It was named for the Greek word pithos, the type of container famously given to Pandora by the gods. | Julia Bartoli and Chantal Abergel/Information Génomique et Structurale, CNRS-AMU

Locked deep in 30,000-year-old Siberian permafrost, a sleeping giant lay in wait — a giant virus, that is. Pithovirus sibericum, a newly discovered giant virus, was still viable when virologists Jean-Michel Claverie and Chantal Abergel thawed the permafrost around it.

The virus is also physically bigger than members of the Pandoravirus genus, formerly the largest, by about 30 percent. (Yet Pandoraviruses still have bigger genomes than P. sibericum — about 2.5 million base pairs versus P. sibericum’s 600,000 base pairs.) Its resilience raises concern over what other unknown viruses humans might encounter as large-scale mining and drilling projects, not to mention increasingly warm temperatures, thaw more permafrost.