Vultures use tools. Ravens use vultures. Vultures are tools

In Israel’s Khai Bar Reserve, a pair of brown-necked ravens has a problem. They’re after the tasty contents of ostrich eggs and there are plenty to go around. The eggs – the largest of any bird – would provide a nutritious meal but they’re so thick that even a pair of ravens can’t puncture them. But they don’t need to. The ravens know that the desert is also home to a master egg-cracker – the Egyptian vulture. All they have to do is wait, and they can rob the robber.

Shai Kabesa from Ben Gurion University first noticed the ravens at work in 2008. Together with Reuven Yosef, she pieced together their strategy in the following years. The Khai Bar Reserve has no native ostriches – they were hunted to extinction in the area during the 1940s. There is, however, a thriving conservation project that’s breeding the birds in the hope of reintroducing them. Ostriches lay their eggs in a single nest. The dominant female goes first, laying around 15 to 20. Her subordinates follow with 3 to 4 of their own. However, the top pair of ostriches can only incubate around a dozen eggs effectively, and they roll the rest away from the nest. This creates a ring of nutritious treats for any bird skilful enough to break into the eggs. The Egyptian vulture does so with a special technique

– it uses a tool, and is one of the few birds

. It picks up rounded stones in its beak and uses them to hammer the egg shells until they crack. Even ostrich eggs eventually give way. But the vultures don’t always get to enjoy the fruits of their labours. Yosef found that on at least three occasions, a pair of ravens, watching nearby but hidden behind a bush, quickly flew in and drove the vultures away. 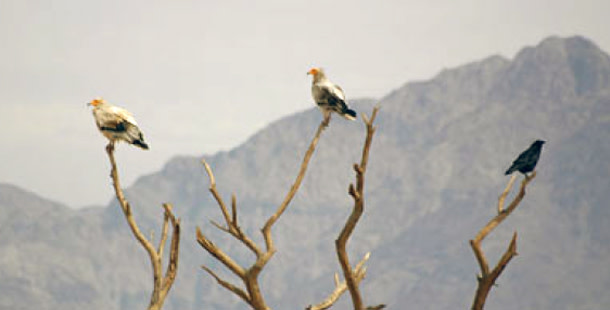 Yosef thinks that the ravens he saw are the same individuals – they behaved in virtually the same way from one robbery to the next. Their behaviour suggests a keen intelligence. Yosef writes, “Most apparent in the ravens is their innovative thinking and ability to predict the actions of the potential host or prey.” He thinks that the ravens recognise that ostrich eggs are valuable food but that they cannot break through the shell. They seem to understand the vultures’ technique. They know they have to hide and “be patient”, waiting till the vulture has broken the egg before showing themselves. They know that by hunting together, they can effectively exploit a source of food that they would never be able to reach. This is possibly overstating the case, at least without putting the birds through any experiments. Animal intelligence is a notoriously tricky thing to study and many previous claims have been overplayed. For example, are they biding their time for the vultures to finish, or are they simply attracted to the glisten of exposed egg whites? Nonetheless, it’s hardly far-fetched to claim that the ravens

are acting intelligently. They and their relatives – crows

– have demonstrated impressive feats of behaviour time and again. In the same nature reserve, Yosef has found that brown-necked ravens cooperate to hunt

a local lizard called a mastigure

. When the lizard is away from its burrow, a pair of ravens circles in and blocks the entrance. With its escape route cut off, the lizard is attacked by the other ravens. Only when the lizard is dead do the burrow-blockers join the feast. Elsewhere in the world, other species of raven are just as resourceful. Common ravens raid the buried larders of Arctic foxes.

to gain access to fresh carcasses that the wolves rip apart – a very similar strategy to the one that the brown-necked ravens use to pilfer eggs. In captivity

, ravens can work out how to reach meat hanging from a perch by a string – they pull the string gradually, stepping on the loops to keep it from dropping. Yosef says, “It appears that the intellectual flexibility and response to ever-changing conditions has allowed this highly intelligent family to persist in extreme conditions—from the freezing tundra to the hot deserts.” The same can’t be said of the Egyptian vultures. They don’t seem to have come up with a strategy to counter the aggressive ravens. They have large brains for their size and they breed in pairs that could easily see off thieves. But as Yosef writes, “It appears that although they may have large brains and are able to wield tools, they are not innovative enough to outthink the ravens.” Intelligent birds use tools. Really intelligent birds use tool users. Reference: Yosef, Kabesa & Yosef. 2011. Set a thief to catch a thief: brown-necked raven (Corvus ruficollis) cooperatively kleptoparasitize Egyptian vulture (Neophron percnopterus). NaturwissenschaftenHttp://dx.doi.org/10.1007/s00114-011-0777-0

More on crows and their relatives: