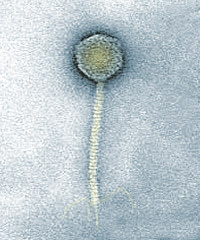 Charles Darwin recognized that natural selection can make eyes sharper, muscles stronger, and fur thicker. But evolution does more than just improve what’s already there. It also gives rise to entirely new things—like eyes and muscles and fur. To study how new things evolve, biologists usually have to rely on ancient clues left behind for hundreds of millions of years. But in a study published today, scientists at Michigan State University show that it’s possible to watch something new evolve in front of their eyes, in just a couple weeks. The scientists were studying a virus, which evolved a new way of invading cells. As a result, their research not only sheds light on a fundamental question about evolution. It also suggests that it may worryingly easy for viruses such as influenza to turn into new epidemics. Check it out.[Image of lambda virus: AJC1 on Flickr via Creative Commons]