Viruses evolve to be more infectious in well-connected populations

A virus, like any other carrier of genetic information, can only enjoy evolutionary success by ensuring that its genetic material is passed on through the ages, and it can only do that if its offspring finds new hosts to infect. Its host must live to infect again, and the virus that kills its host prematurely signs its own evolutionary death sentence. 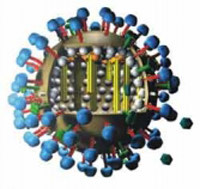 So over time, we might expect that the ideal virus would evolve to never kill any of its hosts - it would have zero 'virulence'. It would also evolve to successfully infect every host it comes into contact with it - it would have a hundred per cent 'infectivity'. In this way, a virus would turn any hosts it meets into long-lived virus factories.

But this expectation is based on a model with overly simple assumptions. It only holds true if the virus's potential hosts are evenly-distributed and ignores questions of distance. In this artificial scenario, once one person in a population carries the virus, every other person has an equal chance of being infected. Obviously, this is not the case - humans, for example, are concentrated in certain areas, be they villages or cities. And even highly infective viruses can only be spread to new hosts within easy reach.

In this more realistic world, highly infective viruses would soon infect every possible host in the local area, exhausting themselves of potential carriers. Strains that were less infective would then gain an advantage. On the face of it, this model makes sense, but testing it can be difficult. Needless to say, ethics committees might frown upon infecting people with viruses and constraining them to different locations to see what happens. Insects are another rmatter. 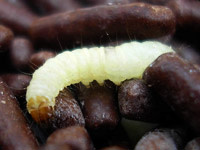 Michael Boots and Michael Mealor at the University of Sheffield have studied virus evolution using the larvae of the moth Plodia interpunctella, and the virus that infects it, PiGV. Plodia larvae can be easily reared in a solid and nutritious jelly, which they spend their young lives in, slowly eating their way around. By changing the viscosity of the jelly, Boots and Mealor could slow down or speed up the moth's movements, and they used this to study the effects of population movements on viral transmission.

In softer jellies, the highly mobile moths could spread over large areas, and the viruses they carry have a wide choice of future hosts. But in harder jellies, moths are more likely to bump into the same individual again and again, and local transmission becomes more important.

After forty weeks and eight generations, Boots and Mealor compared the viruses carried by moths living in hard and soft jellies. They found that those infecting the concentrated hard-jelly larvae were three times less infective than those living from the free-roaming soft-jelly moths. This provides direct evidence that in populations with low movement rates, evolution drives viruses to become less infective. Even very subtle changes in a host population led to strong differences in viral characteristics.

Imagine then, what large changes would lead to. Our world is becoming more and more connected. Air travel is easy and cheap while foreign holidays are becoming par for the course. As our populations mix and local interactions become less important, we would be wise to expect viruses to react accordingly. Boots and Mealor's results suggest that globalisation will lead to the rise of even more infective strains of viruses and other parasites, and larger epidemics.